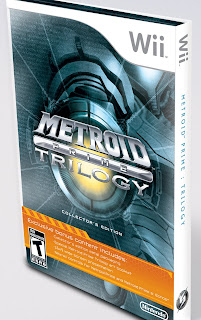 I have been waiting for this for a long time. Metroid Prime and Metroid Prime 2: Echoes are finally on the Wii with Corruption's controls, plus the added benefits like the Token system (ala Achievements/Trophies) without the "New Play Control" moniker that other GameCube-to-Wii ports share (Donkey Kong: Jungle Beat and Pikmin in the US).

What makes this so brilliant is it's all three of the Prime games (Prime, Echoes and Corruption) all on the same disk, all for $50. Both Prime and Echoes are in 16x9 widescreen format, both of which didn't have, which is a welcomed addition. There's no new content added to any of the games (asides from the Token system in Prime and Echoes), but the games themselves should be enough for you to drop a Grant on them.

Metroid Prime has really stood the test of time, as it's been 7 years since it's debut on the GameCube. I picked up playing it after I finished with Batman: Arkham Asylum, and I have to say, I'm having just as much fun with it as I did with it when it first came out.

Metroid Prime 2: Echoes, well, I'm not necessarily eager to play that installment, as I feel Retro really skimped out by falling back on the dual worlds scenario. I didn't enjoy the story too much, but fighting Dark Samus was a treat. The beam weapons I did not enjoy, as they are simply rehashes of old beams: Dark Beam is the Ice Beam, Light Beam is the Plasma Beam, and the Annihilator Beam is nothing more than a combination of the Dark and Light Beams, sharing each beam's ammo (which, after all this time, I'm still wondering why they ultimately used an ammo system for them). However, I guess every major franchise has to go through this phase sometime in their longevity.

Seeing as Corruption came out last year, I can't really say I'm down for playing it again, as nothing has really changed.

There are a few problems I have with Prime's transition to the Wii, which I've detailed out below, in a fashion similar to Kotaku's Love/Hate.

Head past the break to read the review.

Packaging Holy shit. Leave it to Nintendo to completely blow your mind when it comes to their game packaging. First off, there is a nice art book with stuff that I haven't seen before (WTF is that on the second to last panel, a Chozo/Ridley hybrid? A Chozo?) Not one to be left behind in how a game ships, Nintendo put all three games in a SteelBook case. Because the only thing that can handle all three Metroid Prime games on a single disk is a steel box. And a Wii.

Updated Controls After so long, Metroid Prime and Echoes are getting Corruptions control scheme.

Visuals Even after 7 years, Prime is looking just as good as Corruption, or any Wii game. Hell, make that any game in the past, well, 7 years.

Updated HUD From the Scan Visor's targeting reticule, to the updated HUD, it's even better to look out Samus' visor

Slightly Reworked Areas I saw this primarily during the Hive Mecha boss in Chozo Ruins. In the original, the platform you get to fight the War Wasps on was more of a box, with giant steps to take. Now, it's a pyramid, allowing easier access to the top, when and if you get knocked off by the Wasps.

Beams Still Aren't Stackable Yes, I know, Corruption has stackable beams, and you'll probably say go play that, but there is a reason. With the lack of a tertiary direction input (the C-Stick), Retro couldn't make players switch between beams, so they - finally - made them stackable, ala Super Metroid. The problem with that is the second beam you get - Plasma - is so far in the game, they might as well have stuck you with one. With Prime, they mapped the beams to the [+] button, just like they did with the visors to the [-] button in Corruption. The problem lays in fluidity: You have to hold the [+] button (albeit for a hot second) to select which beam you want. Thankfully, you can quickly tap the [+] button and Samus reverts to the Power Beam (same lies within Visors). Sadly, the doors still retain that aspect of having to select a certain beam to get through. They should have made each door that requires the Wave/Ice/Plasma Beam to get through revert to a blue door once they are initially opened, allowing for ease of access throughout the rest of the game, without having to select your beam. The only problem is Echoes; they should have just have fixed the door issue and let the beams still be selectable, but still.

Stretched 16x9 In Cutscenes I've only seen this pop up during the elevator scenes, but it's stretched 16x9. I can see the issue laying within the video itself, filmed for 4x3, and Retro simply doesn't have that data.

Animations Out Of Date Primarily Samus' Missile Launcher. In Prime, the end of the arm cannon splits in four, and opens up like a missile silo door. However, in Echoes and Corruption, they split into four, but the end widens and pulls back, partly covering the rest of the arm cannon. This is primarily a continuity issue that I have.

Item Pickups Again, with the continuity, In Echoes and Corruption, the Missile Launcher is the standard, large orange and red Missile. With each expansion, the icon is changed. In Prime, no matter which one you get, it's always the same.

Scanning With Echoes and Corruption brought an overhaul to the Scanning system, where each scannable item is highlighted with either blue or green. In Prime, it still has that ugly orange or red square.

Certain Animations Missing As soon as I got the Ice Beam, I was wondering if Retro did anything different to the Ice Beam. They sure did. They removed the ice covering the arm cannon when you have a fully charged shot ready to go. That added to the game, and was an awesome addition to the nature of the game, and simply cannot go unnoticed. This is the only instance I've seen this, but I'm expecting the Plasma Beam's particle effect during charge to be removed as well (UPDATE: It is). And the Dark Beam's arm cannon-freezing effect as well.
Sequence Breaks Broken Not part of the overall quality of the game, but after the initial release of Prime, there was a community that I was involved with that dedicated themselves to sequence breaking. Sequence Breaks (or SB to the cool kids) is the art of obtaining an item earlier than the game's original plan, or breaking the sequence of getting an item. Retro has all but gotten rid of all traces of sequence breaking (mainly the Plasma Beam SB in Magmoor, which you can get this right after getting the Ice Beam if you own a copy of Prime's first disk pressing). I can understand they want to "preserve" the essence of their original masterpiece, but it's giving the middle finger to their fanbase.


All in all, I have no major problems with the Trilogy, other than Prime's lack of beam stacking or door reverts. The games are all still phenomenal pieces of work, and even if you own the originals, if you're a fan of Metroid, you should be playing this instead of reading the review.