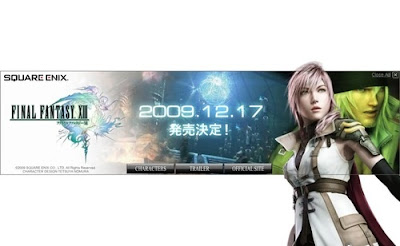 Hidden within the depths of a flash site, there lurks the release date for Final Fantasy XIII. That date? Well, if you didn't catch the headline, it's December 17. According to Kotaku, there is a Twittering method to unlock this image:

The flash site's URL had "_Before_" in it, and typing "_After" seems to bring up this image, which clearly states that the game goes on sale December 17, 2009.

There has only been a previously know release window as "this winter." The only problem with this date? It's Japan only.

Square Enix will be holding a press conference later today to unveil the release date for Japan, so it's safe to say this is a cached image on the aforementioned site, waiting to be unveiled to the public.

My only problem? I'm still debating between 360 or PS3. I always buy multiplatform games on a 360 simply because of Achievements (Trophies seem like the red-headed step child of PS3 system functionality), but I'm debating on FFXIII because of the multiple disc issue, and I can foresee an issue with the 360 coding.

[UPDATE] It's set in stone. Japanese gamers will get their Final Fantasy fix on December 17. Everyone else has been given the window of "Spring 2010;" when I say "everyone else," the press release from their conference at 4-fucking-AM local time said they are aiming for an international release with the game. They poked at the fact they really don't like Europe when it comes to Final Fantasy releases, and said they are trying to get "everyone" (probably just North America and Europe; paraphrasing of course) to have FFXIII around the same time.

Japan will also be getting a PS3 Slim/FFXIII bundle. So far, just the system and game have been confirmed; no special art style to the system or goodies.

Let's just hope that we'll have XIII before Japan gets XIV. Which I have no intentions on buying, purely standing by the fact that I hate MMOs.
READ
at 6:50 PM