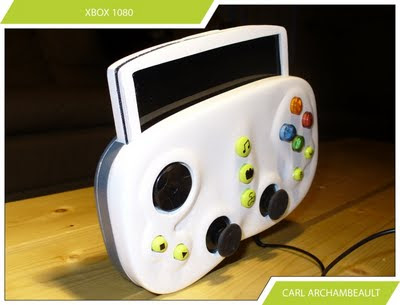 Cruising thru Destructoid, I found this post for an 'Xbox 1080,' which is a non-working prototype. I cannot put enough emphasis on that.

Carl Archambeault, the creator behind this, crammed an LCD screen into this monster, with the joysticks and face buttons of a 360 controller into it, with extra buttons for media control. There's nothing on triggers/bumpers, but I wouldn't doubt it if they're on the back. Quoting his coroflot page:


This make me think back to the Zune HD rumor that came out about the Live Anywhere software that would be built into the Zune, allowing access to a portable version of Xbox Live, with access to your XBLA games to play. I'm down for that.
READ
at 10:40 PM