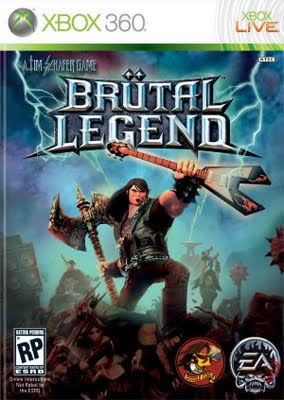 I had no interest in Brütal Legend when I heard about, as I was going to simply pass it over, scoffing at the fact they chose to release day-in-date with Uncharted 2. After playing the demo, I was convinced I would be buying it and enjoy it. And I did.

Brütal Legend is an overall great experience with amazing metal tributes and commendations. Ozzy as the "Guardian of Metal," Kyle Gass as the mortar cannon operator, animals as motorcycles. Oh, and Jack Black as Eddie Riggs. Tim Schafer made sure metal was oozing out of every corner of this game, and he succeeded. I just wish that more developers would actually take pride in their game and put as much effort in creating a game as the way Tim did here.

The landscape is, by far, a masterpiece. Engines and exhaust pipes litter the land, trees that grow exhaust pipes, giant guitars with hands playing them cast in stone, the Rockmore Effigy, Bladehenge, Lyonwhite's Pleasure Dome, the Kill Master's fortress, everything comes together as one huge metal tribute.


The story progresses via a bus tour, which each main story chapter taking place as a "stage battle." Here, Double Fine dabbles in Real-Time Strategy. I feel they really could have used some more work on this, or at least called up EA or Ensemble for some tips, because I dreaded story missions. You have your Stage, which is your home base. In order to have a flow of money, there are Fan Geysers. Eddie must play the Fan Tribute solo in front of one to build a Merch Booth over it, allowing you to harvest the fans, who act as the currency. If there are enemies nearby, or covered by a Fan Leech, you much get rid of them all before you can. You use fans to buy units, upgrade your stage for more advanced Ironheade technology units, or upgrade certain units. This is a really stripped down RTS experience, as the main focus is on units themselves; Merch Boots are the only buildings you can build.

The combat, however, is a real treat. You have either you guitar, Clementine, or your Axe. You can upgrade the strings on your guitar or the blade on your axe for varying effects. However, aside from melee combos that intertwine your axe and guitar, there are no special abilities that come from different string/blade combinations, which would have greatly changed the fighting aspect. The big "upgrade" focus is your car, The Deuce, or the Druid Plow. Here, you gain nitrous boost, better engines, armor on the front of your car and various weaponry ranging from machine guns to lighting rods. I had a blast every time I drove the Deuce, but the driving itself was pretty shoddy.

Metal Everywhere There's not a scrap of the land that isn't somehow influenced by metal itself. Unless you count grass, then there's something.

The Soundtrack How many songs are there? 80 something? 90 something? And it's all great metal music. I take pride in my metal - more of metalcore or post-hardcore - and there are songs in there that hit home with me. Some bands I could do without, but hearing Tenacious D's Master Exploder come across the radio Mouth of Metal was awesome. You knew there was going to be some D in there, right?

Jack Black You may hate the man, but I love JB. His devotion to this game is astounding. The amount of life he gave his character and the help he offered Tim on the game is awesome. Jack Black is someone who no one else can be compared to, and he brings that individuality to Eddie Riggs. His opening cutscene at the very beginning is pure gold, as well as his lines. DECAPITATIOOOOON!!

Driving Yes, the game isn't focused on driving, but there are some clipping issues, mainly being able to come to a dead stop hitting a candelabra that is the width of a pencil is absurd. The racing missions were fun as shit, but the nitrous boosts do nothing to make you feel that the flames shooting out the sides are making you go any faster.

No Dio Get over yourself having problems with Ozzy. How long ago was that feud, and you still hold a grudge? Don't get me wrong, Tim Curry did a fan-fucking-tastic job as Doviculus, but knowing that Ronnie James Dio was initially set to be Doviculus is a bit crushing, seeing as he backed out because Ozzy was on board. Seeing him interact with JB in Pick of Destiny as himself, I knew there was going to be chemistry between the two in Brütal Legend, but a little childish hatred can come between greatness.

Too Short I actually finished all side quests and got all collectibles before the end of the game. Hell, I was 50% complete before I even fought Lyonwhite for the final time at his Pleasure Dome. I probably put about 5-6 hours into the story, and the rest of my 18 hours went towards serpent hunting, legend telling, racing and secondary missions. There is a lot to do, but the story definitely could have been elongated more than just something short of under 10 missions.

Not Enough To Buy There isn't that big of an influence to actually visit the Motor Forge, because you can buy all items by the end of the game. There's about 8 axe treatments, 7 string varieties, 6 combos and a dozen or so Deuce upgrades. They really could have fleshed out the combos and weapon varieties.

Brütal Legend is an amazing game. Few things can stop this from becoming another great Schafer game, only behind Psychonauts. If you haven't bought it already, borrow it. If you're friends don't have Brütal Legend, get new friends.

This review was based on the Xbox 360 version. Brütal Legend was played on Brütal difficulty and to 100% completion, unlocking everything asides from Drowing Doom and Tainted Coil concept art. Multiplayer was only used in the earning of select few achievements, and there was zero online play. Brütal Legend was bought on the day of release from Best Buy at the full, $60 retail price.
at 1:52 PM