Uncharted 2 Special Edition in UK Only, Get Yours Now [UPDATED] 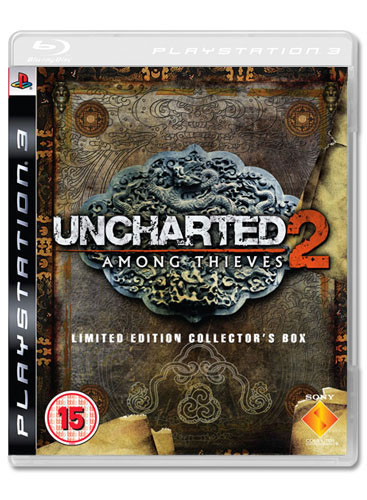 [UPDATE] With recent revelations on the UK getting video game price hikes, Uncharted 2 is now listed at £54.99/$87.62, up £5 from the previous price. However, the £10 price cut is still in effect, giving you a sale price of £44.99. Modern Warfare 2 was the first game to get this price hike a while back, before I started Destroyed Controller. Is this special edition worth $90? No fucking way.

The below information still holds merit, just be weary of the price hikes, which have been updated below.

I need to get this out there before we all forget: Uncharted 2: Among Thieves hits shelves in a mere 9 days. Nine, goddamned, glorious days. That's next Tuesday for you calendar illiterates. What doesn't hit US shelves that day? This special edition. Where does it hit? The UK. Across the pond. The place where tea and crumpets are a common thing. That place...

Thankfully, there's import shops, specifically, game.co.uk (or GAME). Linked to from the SCEE launch page (warning: link opens 100% flash page), GAME is the only site listed that is offering this Special Edition Box Set. Oh, and it's pre-orders only. And it's the same price as the regular edition. Go figure.


While trying to place an order from the site (which they will ship to the US), I get an error after entering all my info and hitting the "Place Order" button. Here's the error itself:

Unfortunately we have not been able to complete your order online in this instance. For your protection, we have a series of comprehensive anti-fraud and safety measures. However, these can sometimes be triggered for wholly innocent reasons. Please contact our Customer Services Team on 0871 200 1221 to complete placing your order on this occasion.

(*Calls cost 10p per minute; calls from mobiles and some networks may be higher). Hours of Operation: Monday to Saturday, 9am to 6pm. (Ed. note: 5 hour time difference between UK and East Coast)


Now, I chose to call them, which was probably an ignorant thing to do. They say it costs 10p/95¢ (that's pence, or change). However, AT&T charges $1.50/pfm (or per-fucking-minute). I was on the phone with them for - roughly - 15 minutes ($22.50) and got nowhere. She said to call back tomorrow (which was meant to be yesterday, but I'm not doing that again). I found the email form, but they require a postcode, but it has to be a UK code; I entered GAME's own postcode. That was Saturday. I hope to hear from them tomorrow.