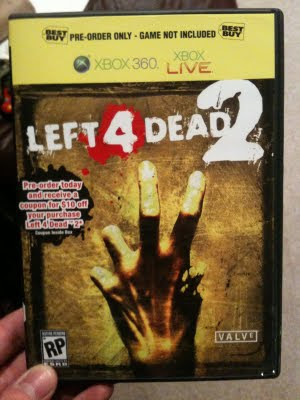 I just swung by Best Buy with my girlfriend so she could pick up a few CDs. I run into a manager I used to work for in there and we started talking. She tells me that they oversold on their Prestige editions of Modern Warfare 2, which I just plopped down for yesterday. Out of curiosity, I check out what other pre-orders they have. I see boxes for God of War III - both regular and ultimate editions - Left 4 Dead 2, New Super Mario Bros. Wii and various other games without incentives.

God of War III and L4D2 both have some amazing incentives, reason why the preorder box for L4D2 is holding place until next Tuesday. If you pre-order L4D2 from Best Buy, the box comes with a coupon for, get this shit, $10 off of L4D2 when you come back. With your $5 reservation, plus the $10 off coupon, you pay $45 for it. Not too shabby, and better than what Valve was offering on Steam. There is a downside, as you must redeem the coupon between 11/17 and 11/21.

God of War III - not dependent on which version you buy - will take $10 off of the God of War Collection that comes out next Tuesday. The only downside is that you have to buy the Collection when you preorder for the reduction to take effect. Not sure on when the offer expires, as I'm obviously waiting until the 17 to pick it up, which I should take off of work for just in case freebies/swag get snagged up early in the day. Seeing as my schedule is getting jacked up since my month suspension - and the fact I can't get the second half of Thanksgiving week off to go visit family I haven't seen in 5 years - I need to get this shit in yesterday.
at 5:00 PM