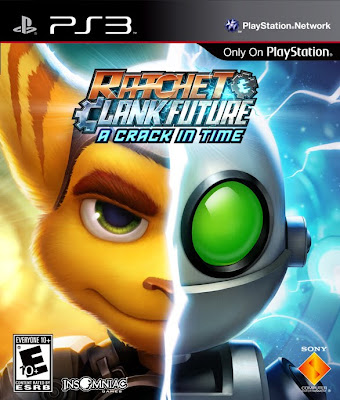 My reviews seem to be coming a lot more often than I originally thought they would be. This would make number 5 for me for the blog. Whoop whoop.

Anyways, back to the issue at hand, Ratchet & Clank Future: A Crack in Time. The third installment on the PS3, the conclusion to the Future trilogy and the 9th (!) installment overall. Keep in mind with this review, I only became a fan of R&C with Tools of Destruction. With that, I went back and bought R&C1, Up Your Arsenal and Going Commando. I never bought any of the other installments, as I just don't have the interest - or the time - to play them. I do now own Quest For Booty and, of course, A Crack in Time, making that 6 of the 9 that I own. Not too shabby, if I say so.

All in all, all the R&C games all fall on the same premise: platformer shooter, ass-ton of off-the-wall weaponry and crazy ass gadgets. I can see one problem with this, and the only comparison I can make are to the LEGO games. It's all the same, and it's been done repeatedly. The formula is getting old, I must say. Do not get me wrong, I do love me some R&C, but they really need to do something to add some life to the series. What Insomniac did with ACIT is a step in the right direction.

Gameplay has always been R&C's foothold, as when it was first introduced, it was very over the top weaponry that sold it.

Ratchet & Clank is pretty much the same game for the past 7 years, with the only change are the weapons and just a few new new gameplay gimmicks. It's almost like the LEGO games, where I can never find myself not wanting to buy a new one, as I'm looking forward to the new content in LEGO Indy 2. The gameplay is addicting, and you can just never get away from it. With the new space exploration, Clank's Temporal Puzzles, where you can alter time to solve puzzles, and a handful of new weapons make this a great addition, but it's not necessarily something that I would expect Insomniac to close out the Future trilogy with.


Good Old Platforming The platforming in the game is always solid. I've never had an issue with it, but there are clipping issues that arise mostly throughout Clank's part of the game. I did run into a few with Ratchet, however. It did take roughly 10-12 hours to complete the game, and I did fully clear out all collectibles. The use of the hoverboots, in junction with grind boots and ramps, add a very nice mechanic to the game.

Control Mapping Getting Better Insomniac did bump up the amount of weapons in this game, going from 15 to 18 (if I remember right). I did like the fact they mapped gadgets (slingshot, hoverboots, OmniSoaker and a new, time-altering item, which I shall not name for spoiler sakes) to the D-pad, rather than in the Quick Select wheel, which does help separate the two types of items in the inventory.

New Weapons I love the Sonic Eruptor. The Ryno V doesn't seem as powerful as the older Ryno iterations were, which I am a little disappointed with. I love the effects of the new weapons, as well as the upgrades to the familiars.

Outer Space The inclusion of being able to fly Aphelion was a treat, as well as being able to earn upgrades for it by collecting Zoni. There are multiple moons to fly to, each getting more and more difficult to traverse for those who are more of mazes, rather than enemy hideouts.

Clank's Half of the Story The time puzzles - where Clank makes a recording of himself to solve a puzzle partway, which can help him, or another recording, fully solve the puzzle - were a great addition, and I did have gratitude in solving each one, especially near the end.


Not That Difficult I did play the game on Hard, which, I have to say, I'm not used to playing games on the hardest difficulty out of the box, but recently, it does help with stackable achievements/trophies, as well as teaches you how to play the game rather than going into it way too easy and walking away feeling you wasted $60. However, I do hope Challenge Mode offers a challenge.

Arena Challenges Not Inventive The Battleplex this time around wasn't too enthralling, and the events themselves didn't seem that inventive as before. They feel rehashed, reused, and sadly, not that great.

Outer Space The outer-space sections don't necessarily feel out of place, however, they were entertaining. Bad thing is, they get repetitive, moreover what you do in each of the five sectors. I did like the ship upgrades, by near the end of the game, the missiles becoming pretty useless considering enemy ships eventually get deflectors in the later sectors.

Step Down in Visuals A Crack in Time does show it's wear of the series, as the visuals are just not what you'd expect coming from Tools of Destruction. Insomniac's decision to use pre-rendered cutscenes, rather than the game's engine, detracts too much emphasis from the overall quality of the game's visuals, which have been a mainstay of the series.

I can tell Insomniac is getting tired of making R&C games, as it definitely shows in ACIT's quality. This is what QFB should have been, but I do understand that it was an appetizer, so to speak, for the rest of the Future trilogy. The reunion with Clank at the end was long overdue, albeit short; it was pretty late in the game, too. It does show that Clank is fairly useless, as Ratchet's inventory has effectively taken Clank's place of his backpack.

The boss fights at the end were fairly epic, and very enjoyable. Despite that, A Crack in Time shows the R&C formula is getting diluted amongst itself, and Insomniac is hurting for ideas. I can tell they want to move away from the series that made them who they are today and focus more on eventual new IPs and more work on Resistance, however, with the ending, you can tell you'll be seeing more of Ratchet and Clank in the future.

Ratchet & Clank Future: A Crack in Time was played on Hard, earning all collectibles and trophies, just one shy of earning Platinum.
at 9:41 PM