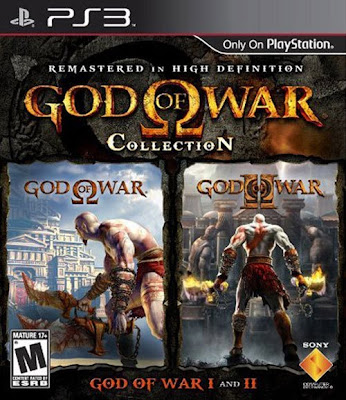 I'm a big fan of God of War. Not a huge fan, like I am with Zelda, but I admire the series, I love Kratos and the gameplay is top notch. With the collection, I get my God of War in HD, as we all thought the PS2 copies would be upscaled in the PS3. Remember that? Yea, how naïve, right?

I love the Collection. $40 for both games, when they sell for $20 or less brand new. Ok, so that probably didn't sell it, but when the team goes back, created HD textures, the framerate is a solid 60fps, added Trophy support and pretty much shows up current-gen devs that these last-gen games perform, play and look better than the shit they're rubbing out. Am I sucking up to Santa Monica? Sort of.

One thing that I didn't understand about the "Collection" moniker is that you're only getting half of the God of War games released to date. Chains of Olympus (PSP) and Betrayal (Cell Phone) were not included, and if you want it to be a collection, then you better damn well make it so. Another name could have been prepared, but given the amount of time they put into this (a few months), I am damned surprised how well this has turned out. Any longer spent on bringing CoO and Betrayal into the collection would have put this in line with GoWIII's release, which, now that I think about it, would probably have made more sense.

The Whole Goddamned Thing Seriously, this is how you do it. Devs, get off your asses, pull your thumbs out, and use that second hand to do some work. Your "next-gen" game just got showed up by a four-year old PS2 game, and it's PS2 sequel. Suck it.

Trophies Aren't Butt-Fucking Retarded Hard To Obtain Like I just said, they're easily obtainable. I'm missing two gold and of course the platinum from GoW. Those are beating it in under 5 hours and completing the Challenge of the Gods. Yea, bump that.


Technically, It's Not A True Collection Like stated above, they should have included Chains of Olympus and Betrayal. Add HD textures, bump up the native resolution and add Trophies to CoO (the first PSP game to have Trophies, too) and just bring Betrayal over (can't really do too much with a cell phone game, right?). Perhaps they'll bring Betrayal as a PSP download...

This is remastering at it's best. They didn't change a damn thing when it comes to the game itself, which is a good thing, and they just updated the visuals. And Trophies. Oh, the Trophies. If Nintendo is up to having more external teams work on their franchises, they'd be wise to pay off Sony - again - to let Cory Barlog and his Santa Monica team to "remaster" Ocarina of Time. Yea, I said it. Let Santa Monica remaster Ocarina of Time. Hell, Eiji won't remake it because of the emotional attachment, so I say "fuck it" and get it over with.