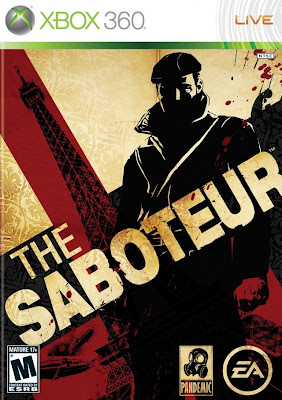 This game pissed me off. I'm going to try and make these reviews shorter, as judging by my feelings towards this game, I want to spend as little time writing this review.

Now, don't get me wrong, there were enjoyable parts of this game. Pandemic wanted this to be a Grand Theft Auto/Assassin's Creed, and as friends put it, those are two games that, apparently, shouldn't procreate. But the parts that were enjoyable were overshadowed by the rest of the game that, pardon my French (and the pun), sucked more than all fuck.

Pandemic's so-called "swan song" of a game is one sang by retarded children at a school function. There is just so many things wrong with this game, Pandemic should have sold the rights to the game back to themselves once they established their new studio, and kept development going from there. Releasing it in December against Spirit Tracks was perhaps the wisest move; it was either that, or delay it for a few months and release it alongside BioShock 2 and Splinter Cell: Conviction. This is, quite possibly, the best version of this game we'll ever get.

Nazi-Killing It never gets old, but it seems as time moves forward, the games that involve Nazi killing get worse and worse. Seriously, have you enjoyed a game that features such pastime since the original Wolfenstein? I'll take that as an overall "no."

Perks Very nice system, and works fairly well. But when there are things that require shit that is butt-fucking retarded to get - try the level 3 explosion perk; destroy a certain tank and a zep all within the same wanted spree - it kills the experience. Quite possibly the only saving grace of this game.

Everything Else If I made a bullet point for each thing I hated, this would be the longest review I would ever right for this blog. I cannot believe this game was published, considering how bad things were. The driving, the climbing, the shooting, the fighting, the walking, the blowing-up...everything needs more polish and more dev time. I don't know the history behind this game, but I started hearing about it in early November, and I became intrigued. It wasn't something that I was destined to buy, but I did simply because I haven't bought an odd-ball game in a while, as I had this odd, overwhelming, clandestine needto do so.

Pandemic, or whatever is left of you guys, your game needs work. Pick up the rights to the series and make the inevitable sequel that will shit all over this game and my review.

The Saboteur was played on the Casual difficulty and to full story completion. Nearly all perks were obtained, but not all collectibles earned.