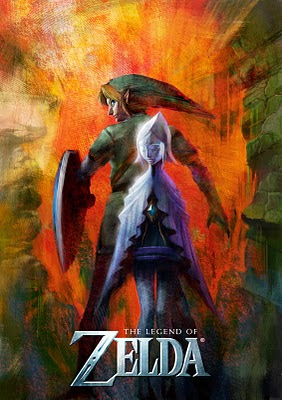 I don't want to be one to draw such brash conclusions, but this is a wild one that Joystiq has seemed to pick up on.

It all started at 2chan, a website/message board that apparently gotten a hold of leaked details on the new Zelda game. An IGN Boards member - sharinganhero - translated the Japanese bibble-babble into something the rest of us can read, and gotten a pretty good chunk of info. As The Wiire points out, 2chan has a very good track record. They have had accurate leaks in regards to Resident Evil 4 and 5, "every Square Enix RPG," Metal Gear Solid 4 and every Kingdom Hearts game. It's also good to point out they successfully leaked Wind Waker's story 2 months before it was made official:


Head past for my speculation.

My hope is with you.

The inclusion of the Hero of Time factoid - despite the irony of that word in this situation - has me giddy as a Japanese school girl at the thought of playing as OoT/MM's Link yet again.

However, seeing as Eiji came out not too long ago and said that remaking OoT would destroy any - or most - emotional ties that many people have with that game. Revisiting that Hyrule with that Link is pretty much the same, even though much evidence points to TP's Hyrule as the same as OoT's Hyrule, that, itself, precedes - and contradicts - Eiji's statement by nearly 3 years.

When it comes to Zelda rumors, I absolutely hate them, because I cannot grip the fact they may not be true. I do have a keen sense to dispel some rumors that just reek of bullshit, but I can't stop myself from letting my imagination run wild when this sort of news pops up.

Yes, there's a wanking joke in there.


7. Link, Epona and Gorons' Character Model Enhancements
Secondly, the character model enhancements. With Link, Epona and Gorons appearing in a Google Translator translation of this, you can only assume that this may have been misconstrued. You can only assume that other pivotal characters - Zelda and Ganon - have been completely overhauled, or quite possibly, taken out. Considering this next factoid, I'm going with "removed."


8. This is the 'Hero of Time' Link
Next up is the rumor that this Link will be the Link that started it all, the Hero of Time, ala Ocarina of Time and Majora's Mask. I say "started it all" because, according to Miyamoto's official timeline that he came out with during OoT's release, he said Ocarina is the beginning of Zelda's chronology. If this means that the Hero of Time (HoT...actually, let's not use that acronym...THoT; much better) is the Link of this new Zelda game, there are only two worlds that Link traveled to: Hyrule and Termina. Traveling away from Hyrule presented in OoT has yielded 4 new areas since MM: areas beyond Hyrule Field of OoT access via the Great Ocean in Wind Waker, the new area that Link and Tetra found after WW in Phantom Hourglass, the new area that Link and Tetra's descendants found in Spirit Tracks, and the dimension that Zant inhabits in Twilight Princess.

For those not keeping up with the class, Wind Waker takes place in a flooded version of Ocarina of Time's Hyrule, and finally introduces us to King Daphnes Nohansen Hyrule, the King that flooded Hyrule after Ganondorf escaped the Seven Sages seal they used to imprison him in the Sacred Realm at the end of Ocarina of Time.

In regards to the "other half of OoT's timelines clusterfuck" statement, Majora's Mask would not have happened if Zelda did not send Link back to his childhood at the end of OoT. Remember, Majora's Mask opens with Link riding Epona through the Lost Forest looking for his "lost friend;" Navi left him as an adult at the end of OoT, and did not travel back with him to his childhood, possibly lost 7 years in the future. If that is true, there were two things to believe: Link's search was all for naught as Navi was 7 years in the future - or - Navi was in the Lost Forest, where she lived before the Great Deku Tree told her to go to Link. With Zelda's intervention, there are now two timelines that branch from Ocarina of Time - (1) Link returning to his childhood, warns Zelda of Ganon's intentions, includes the Sages in his imprisonment, and Hyrule won't succumb to his tyranny (Child Timeline) and (2) Hyrule repairing from Ganondorf's tyranny after his defeat (Adult Timeline) - which, this intervention can be contributed to causing further confusion to ironing out a generally accepted Zelda timeline. It is oft believed that TP takes following the Majora's Mask timeline, paralleling the events of Wind Waker; if TP takes place 100 years after OoT, and WW takes place 100 years after TP, you could say TP is what Hyrule would look like if the Great Flood did not happen. It's interesting to note that all of these cel-shaded, young, cartoony Link-based games are all based on the Adult Timeline, whereas the darker/realistic Zelda games are based off of the Child Timeline. Weird, huh?

In Phantom Hourglass, Link and Tetra have left the Great Sea from WW to find a new place to call home. This sea's geographical location, in comparison to Hyrule's Great Sea, is never made, so we do not know how far away this is. Seeing as Link and Tetra are nearly the exact same age they were at the end of PH, and they were traveling by boat, it couldn't have been long - or far - until they found their new world. In Spirit Tracks, it's been three to four generations since PH, seeing as Linebeck's great grandson, Linebeck III, is a merchant. Alas, Twilight Princess's Hyrule has enough evidence to prove it is OoT's Hyrul, however, the dimension you travel to to fight Zant is a new area. While not part of Hyrule itself, hence a dimension, it is in the overall universe.


9. If my calculations are correct, when this baby hits eighty-eight miles per hour... you're gonna see some serious shit.
Yes, I busted out a BttF quote specifically for this. Time travel will make a return, however, to what extent, it's not evident. With time travel, the only characters to travel through time are THoT, Princess Zelda, Navi, and Ganondorf. Well, only those we know of from OoT. Since then, there has been no Zelda game that involves time travel. Plus, the nickname "The Hero of Time" can only lead every fucking person to believe that this is the Link from Ocarina of Time.


10. You may or may not go to Hyrule
This happens to be the one line the translator isn't too certain on. At first, he translates it to say you won't go to Hyrule. Then, he edits his post to say that it actually says Hyrule will not be the only place you go to, and that he wishes he learned more Japanese when he was younger. With #8 and #9, coupled with this, you get a trifect confirmation that you could be going back to Termina. I would love to know what part of the Lost Woods the Skull Kid brought Link to and transported/fell into Termina. Someone find me a map and send it to me.

With this bit, traveling back to Termina would cause for many to say this is a sequel to Majora's Mask. I, for one, welcome a return to Termina, however, with the events of the Child Timeline in effect, there are many events in Hyrule that will not happen nor will we see. Take this excerpt from Zeldapedia for example:

Since Ganondorf was trapped inside the Realm of Twilight, it is likely that Volvagia was never revived in this timeline, Phantom Ganon and Morpha were never created, and Bongo Bongo never made it out of the well. However, the fate of Koume and Kotake is shown in the Oracle games. Also, the bosses of Legend of Zelda: The Wind Waker never existed in this timeline.

They make a great point, as most of the bad shit that happened in OoT will not happen, and there won't be any references to it. The only person that does know of these creatures is Link himself, as he fought them in the future. That's four out of five bosses that cannot appear in this new game, seeing as THoT in the new Zelda game (from now on, I'm referring to it as Zelda XVI, as, obviously, it's the 16th main entry into the series) is older, possibly older than his older version in OoT; I'm going to say early twenties, as opposed to his 17-something counterpart. When I say "cannot appear," I'm not saying they won't be bosses, but they cannot even be mentioned, as the one person who created/revived them, Ganondorf, is sealed away by the Sages in the Twilight Realm.

My thoughts on everything as a whole? Something is wrong with a water deity, seeing as Ganondorf killed the Water Sage during their struggle to seal him in the Sacred Realm, Link has to go to Termina, Skull Kid involvement, Navi makes a cameo, the Great Deku Tree Sprout has now grown into a fairly, well built tree, Gerduo are almost non-existent due to the King's army secluding them from trade in the Hyrule Castle Town due to Ganondorf involvement, and Zora's are thriving in Lake Hyrule, with the Figherman making a killing. Oh, and the Kokiri are the exact same little kids we left them to be way back in 1998.