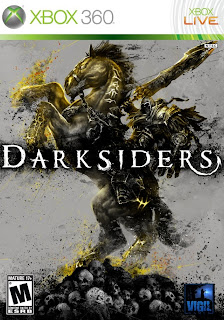 Here we are, the apocalypse. A game that takes the best from many, highly regarded, legendary, god-like games, and crams them all into one package. Notice there isn't any sort of adjective for "package." That's because, well, I'm not sure as to what word I can - or should - use for this game. Darksiders is a game wholly it's own, purely for it's premise: You are War, the second horseman, betrayed by the sacred pact that was formed between Hell and Heaven, seeking revenge on those who brought the EndWar against the Third Kingdom and caused Armageddon.

Sounds fucking epic, right? Well, not so much. The game's story is incredibly interesting on paper, and they do a fairly decent job of keeping your interest after the prologue chapter. However, the only thing that keeps this game going is the promise of swinging your sword about, lopping off heads and arms of anything that simply looks at you. Between the beginning and end, there is absolutely nothing of interest in regards to the story, the world can be forgotten as soon as the game is turned off, and most of the characters you meet are very forgettable as well. Case in point, I don't remember the name of the specter that is magically bound to you that follows you around, and I just beat the game today, no less than 20 minutes ago. I do know Mark Hamill voices him - that's Luke Skywalker to you youngin's - and that was a treat.

Gameplay wise, this game is the game that will tide you over until God of War III hits in March, and that will do some damage until Zelda drops at the end of the year, or maybe even early next year (moreof the latter option will be the most likely). Darksiders slams together ideas and elements introduced, experimented and proven from three series that I witnessed: Legend of Zelda, Prince of Persia, and Devil May Cry. Why DMC instead of GoW? Because your Kratos wouldn't be here if it weren't for Dante. This clash of series and franchises proves to be very fun, however, it does over-saturate the intention, and it really, sadly feels just like this: 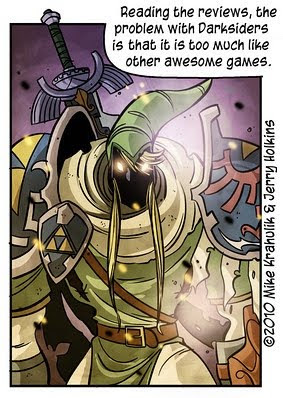 You can see where Gabe and Tycho get their inspiration from. War dressed in Link's garb, the Hyrule Shield's artwork and embroidery embossed across his shoulders and chest, and the Master Sword taking the place of the Chaoseater. Seriously, it doens't take a fucking surgeon to figure out that Zelda was a pivotal influence in Darksiders creation. As the strip implies, it is too much like other awesome games, and there is no problem with that. Sadly, Vigil doesn't do enough to separate it's game from those other awesome games. As before, it takes the elements that have been proven to work, yet they don't do anything to make them their own. Dungeon exploration, item acquisitions - Hoardseeker = Compass - weapon management...it's all too similar, and sadly, I wish they added their own special secret sauce here to make their smorgasbord of a tasty fucking sandwich all their own.

All My Favorite Games In One If you don't know, I'm a Zelda nut. I dedicated the summer of '99 to finding the Triforce in Ocarina of Time, and spent a good deal on my own timeline. Yea, I was that guy. With elements borrowed from other well established franchises such as Devil May Cry, God of War, Prince of Persia and of course Legend of Zelda, Darksiders is a welcomed addition to my growing collection of adventure games. However, like stated above, these ideas become over-saturated and becomes far too often over used by the end of the game.

Holy Shit, It's a Christian Story There has yet to be a game that involves The Four Horsemen of the Apocalypse, and using that as a proving ground that you can take Christian mythology and make it badass and, dare I say, awesome. My only problem is that Death, Famine and Conquest do not appear in the game, until you beat the game. Vigil decided to name Famine and Conquest Fury and Strife, respectively. Fury is female, yet the story tells of four horsemen. I'm not being sexist, but that's how the bible was back in the day, and still is. Hell, even the artwork depicting them show 3 men and a skeleton. Famine holds a balance, yet Fury has a whip. If you look at art, the balance can be misinterpreted as a weapon. Conquest has a bow and arrow, alas, Strife wields two pistols; that's long range bow for long range firearm. At least that's right.

Legendary Abilities The 4 Legendary abilities you can come across each get their name and power from each horsemen, and this is the only mention of the other three's names, asides from the Scythe saying it's Deaths. These abilities do insurmountable things in-game, and thank god 3 out of the 4 have passive bonuses.

Combat System Now I had fun here, learning which combos do the most damage, yet when I found the ones that worked well, well, those were the only ones I used. Chaoseater and Harvester's (LS)+[RB]+X move will send you lunging forward, either repeatedly stabbing with the sword or send the scythe out in front of you will decimate those in front and make shit-piles of bosses. The LT+(LS) back+X move for the Chaoseater fucks anything up, and LT+(LS) back+Y for the Harvester will finish off weaker enemies that have already had their asses beaten and bruised. My favorite one would have to be [RB]+Y with the Tremor Gauntlet or Harvester, and you can unleash the most unholy demonic rape upon any enemy. Using the Tremor Gauntlet's [RB]+Y, then follow it up the A+Y (hold) move is fucking ridiculous. Sadly, until the Gauntlet's were at level 4, that was the only move I used, and the Gauntlet's were the first weapon I got to level 4. I never got the Chaoseater to level 4 before the end of the game.

Weapon Experience Much like God of War, Darksiders has an experience system for your weapons. Rather than collecting Red Souls and spending them in a submenu like you would in God of War, simply killing shit with a weapon earns it experience automatically; no divvying up points. There are slotted bonuses that will increase - and greatly increase - this rate of experience, and that helps a lot.


Bosses Are A Pushover I played on Apocalyptic. Let's get out there first. There are 5 main bosses, and they were a push over. Until you found the pattern to killing them, they shat on you. When you did, you shat on them. The Apocalyptic difficulty did nothing more than increasing enemy health and damage. AI didn't try to ambush me better, or flank me different ways, or any of that. And the Destroyer was a fucking baby compared to Silitha. Fuck Silitha.

Climbing It really felt that the climbing mechanic was too out of place. Yes, it's part of the genre, but War seems WAY too top heavy to climb. And bottom heavy for that matter. This may be the only point in this review that I may have trouble explaining, and I may not know how to describe it, but climbing felt...odd.

Where's My Horsey? You're a horseman. One of the four legendary Horsemen of the Apocalypse. It's your fucking job title. Yet it takes you for-goddamned-ever to obtain Ruin, your horse. By that time, you've already walked nearly 100 miles (the game keeps track of this), so he's bound to have a few ungodly bunions on his feet.

Felt A Bit One-Directional Yes, I'm saying it, Darksiders felt linear. Samael acts as the central hub. From there, you go either left, right, or straight into the wild, reddish-orange yonder. These locations never branch off into different directions, except for the Ashlands, which can send you two ways, and plays role in sending you to the final boss...by warping you there. And that second direction leads you to the third temple, the Iron Canopy. Guess how you get there? You ride Ruin down a U-shaped path (seriously, you make a huge U-turn), stop at an impassible gorge, and spiders ambush you. You wake up inside the temple. What in holy fuck is this? I don't need my hand held. After you beat Silitha, it becomes evident what that gorge is, but come on, Vigil. Do something better for Darksiders II: Four Brothers. Wait, think of a different name as not to jinx the sequel's possible increase in "awesome."

Art Gears of War already did the large, burlesque men with limbs that make Titan's cower in fear. Stop it.

Wrath Powers These powers that consume War's version of Link's Magic - Wrath - are virtually worthless. Blade Geyser was the only useful one is rare occasions, and Stoneskin I used, what, three times?

Mercy, The Gun It sucks. Don't do it again.

Vulgrim's Shop I don't have a problem with the addition of a shop. I like it. However, having to buy combos for weapons that already have an experience system is the very definition of "redundant."

The Actual Apocalypse This acts as your tutorial. The one thing it did not explain? The health system. You have Lifestone Cores, and each one is like a Heart from Zelda. However, rather than 4 segments like the Hearts, they each have their own bar, which will deplete...a lot. It took me until the the Broken Stair to finally figure out what their intention with this was.

Enemy Variety There are maybe just under 10 different enemies, each with their own different paint jobs. Let's get just a few more, because with Hell's minions, I'm sure there's got to be more than 10 different kinds of demons down there.

Felt Lost Sadly, during the Apocalypse, I really felt lost. I don't know if that was a good thing, considering I don't mean "lost" as in "lost in a crumbling modern-day world that is falling to the Apocalypse," but more of the game itself.


I had fun with Darksiders. A lot of fun. I can't make too many complaints about it, other than those I already did. I will recommend this to people I know that like this genre, however, it's only going to happen when it falls below $40.

Post-Script: As you'll notice, I never once mentioned Darksiders' visual quality. It is very apparent that Vigil didn't do what they should have in creating a highly-tuned, visual experience. Looking at concept art makes me believe they had very high hopes and vivid dreams of how well the game would look. Even the cutscenes are decent. However, the game looks like a very well made GameCube game. If Resident Evil 4 on the GameCube looks better than any Xbox 360 game, we've got problems. However, by the end of the game, I forgot about how bland the game looks and pales in comparison to other games.

Since I forgot about the visuals, I sadly didn't remember them while taking notes on the game, and never did once whine about them once I got knee deep in the game (once I reached The Crossroads it started to grow on me, and by the Twilight Cathedral, it was buried in the far reaches of my brain). In short, the visuals were left out of the review solely for that reason: if they didn't bother me enough to write about them or make any sort of notation about them, then it wasn't that big of a deal, and the overall gameplay helped ease the burden that I was playing a game with visuals that are easily mistakable for a last-gen game.