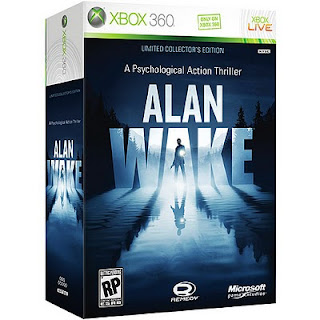 In the ongoing effort to completely destroy your wallets and shelf space, Alan Wake is getting the special edition treatment, in the image of a "Limited Collector's Edition," complete with the tag line "A Psychological Action Thriller." Honestly, I hate when a game that shows this much promise and awesome needs to have lines like this to entice otherwise uninterested buyers to even glance upon the game on a shelf when it's poised next to other, fantastically awesome games, and in Alan Wake's case, it's going to be right next to Assassin's Creed II.

On the Walmart listing for the game, you've got this sporty box shot for the game, as well as a list of your clichéd (L)CE contents (taken straight from the listing):

Unique artwork for the box? Go on.

144-page short story as penned by a fictitious character with fake files from a real beauro? Color me intrigued.

Code redeeming the first DLC pack? Get the fuck over yourselves. You can't simply put that in the game? Why are you doing this? If you're releasing a DLC pack the day of release, then it should have been just included on the disc. That is, unless, you meet one of the two following criteria: