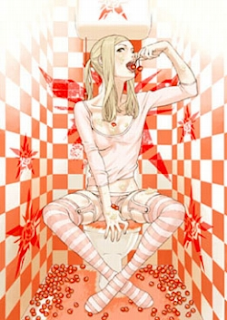 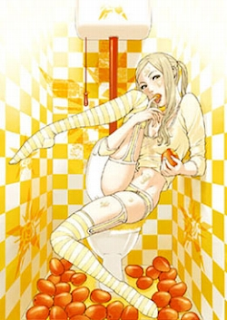 Images via Siliconera
Both of these stories comes from Siliconera, a blog that I've never heard of, but thinking about bookmarking, considering this is the only place that I'm finding news on No More Heroes: Heroes' Paradise, the Japan-only, HD-remake for the PS3 and 360.

Siliconera has info on a preorder bonus offered by Marvelous, supposedly the publisher in Japan - although their Wikipedia page has not been update with this info - will be handing out art books dubbed as "erotica portraits," and each system gets their own...flavor.

PS3 gets the "sexy cherry," and they've only shown one full portrait of one, Ms. Sylvia Christel, the cute little blonde thing that sets up Travis' fights. She's eating cherries while sitting on a toilet. Awesome. There are 3 previews of the other portraits, which include an obvious Shinobu, a less obvious Naomi, and one that I can't figure out.

The 360 version gets "sweet mango," with, again, Sylvia on the can eating mangoes. I must say this before I go futher: she's not using the toilet, she's just simply sitting on it. Reading this, and knowing Japan, I would have thought the same without that tidbit. The preview portraits include another Sylvia, a crotch shot of some female, and the femme fatale of the game, Shinobu, but drawn in a realistic format, not the cartoonish style for the PS3.

Again, no word on the US release, but I did find this out as well: the 360 version will not be censored in Japan, but the PS3 version will be. At least, that's the conclusion Siliconera has come to. They claim that online retailer Amiami states the 360 version is rated CERO Z - Japan's equivalent of an AO - and is the only version they have on the site. A quick run through Google Translator comes across this: the 360 version is the only version listed on the site. They have no PS3 info. This is simply Siliconera jumping the gun and assuming the PS3 version is censored. With the info provided, I don't blame them; we need news on Heroes' Paradise. This is the snippet in question:

Xbox360 this version, as a work from heights Mezasubeku Action, Wii version of operation system Remix. The comfort of the action is more refined and heightened.Easier to play than was pleasure 』from『 NO MORE HEROES Please enjoy.

Xbox360 version of the specification implemented in North America Edition

Xbox360 version, NO MORE HEROES 』North American version, which implements the representation of cruel bloodshed, CERO rating" Z "is intended to (Nov 16 yesterday, is under review).

The first paragraph implies that the 360 version is the "remix" of the Wii version. The line in the middle says the 360 version is what us NA gamers got a hold of. Finally, it states it earned the dreaded CERO Z rating. Amiami simply doesn't have any info on the PS3 version. Done.