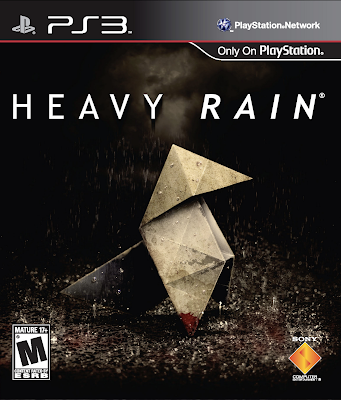 Well, the time has come: I am here to review Heavy Rain. A short, few years ago, this game was shown off at E3 to eager gamers wanting to know what the PS3 was capable of. That was four years ago. Finally, we've gotten that initial tech demo in the form of Indigo Prophecy 2 Heavy Rain.
I initially wrote this for Metacritic, but there was an issue uploading the review to the site, so it's a simple copy/paste job. Please, for the love of fuck, there are spoilers. I cannot emphasize this enough:
ARRGH, THERE BE SPOILERS AHEAD!!!

I remember way back in 2006 when Heavy Rain was first shown off, with tears running down the girl's face as she pointed the gun at me; I was in shock by how picture perfect this tech demo looked. Four years later, I finally have my hands on a copy of this game, and I am very glad that Quantic Dream took their time with this game, considering the lack-luster visual performance they delivered with amazing Indigo Prophecy ('Fahrenheit' for you Brits). Not knowing this, you wouldn't believe that these two games came from the same development team, judging by the visual performance alone. Delving into the story, you can see that Heavy Rain is a spiritual successor to Indigo Prophecy.

The interaction with the environment and the vast amounts of directions the game can take you. Halfway through the game, I felt that if I opened the wrong cabinet door, or turned a door knob the wrong way, it would set forth a Butterfly Effect that has yet to be seen. However, I do not say that in spite of the team, oh lord no. I wish there was more of this kind of interaction with the characters and environment in other games.

I have never seen story telling in such a way until now that made me care for the characters. I wanted Madison to hook up with Ethan. I wanted Jayden to beat the crap out of Blake. I choked up at the beginning when Ethan's son died (how, I will never know, as Ethan was hit by the car). I actually felt for the characters and their possible outcomes. At the beginning before I even started the game, I was under the impression that the game would guide my actions to an ending that the developers wanted. Quite the contraire: my actions would influence even the most minute details of this amazing story.

Heavy Rain is a visually stunning, story driven, user oriented drama that is required playing for anyone that I know, that is reading this, or that owns a PS3. Hell, even if you don't own a PS3, break into your friend's house that has one and play it there (they'll understand, trust me). If my mother can become intrigued by this game, sit down, and ask questions about it - something that she has never done - then Quantic Dream, you win.


The Story As one of the very first Trophies you'll earn, you are thanked for supporting interactive drama, QD's term for Heavy Rain's genre. This genre that I personally hope more from, is absolutely engaging. As I said above, the story became so engaging, I didn't just feel sad when the story picked back up, and you learned that Ethan and his wife divorced - something that was never fully explained - but I was hoping throughout the story that they would get back together, sort of rekindle their relationship. Seeing the interaction between the two of them at the beginning, helping her carry the groceries in, setting the table, playing with the boys...everything clicked in my head; I didn't feel sad, I felt a deep, emotional connection between myself and this family. It was along the lines of Pixar; they can create an emotional attachment between you and their characters in 7 seconds. Flat.
Multiple Directions From the Start Games that offer multiple endings depending on a select few choices in game (Infamous, BioShock) or how many items you've collected (Castlevania, Metroid), Heavy Rain has a total of 6 possible outcomes, all stemming to choices you can take from the very beginning (well, not the prologue, but damn well near it). Let's say, you are halfway through, and every decision you've made leads you towards ending 1, but you make one decision, your outcome can become vastly different. The game isn't directing you to an ending that it wants you to experience, but you are directing the characters to evolve and grow into people you've shaped into what you want.
Cinematic Direction Being able to interact with 99% of the environment really helps drive the story home. Playing on hard, or "very familiar with the controller," I found that some of the context buttons didn't quite match the on-screen motions, or didn't fit what I was doing. Otherwise, everything fell into place almost perfectly. Starting the car and shifting gears, opening cabinet doors, lifting windows, rocking a baby to sleep and evading police capture was practically seamless. Hell, falling in love felt rewarding.
The Characters Ethan, Madison, Scott and Jayden all have their unique personalities. Ethan is Mr. Everyman, Madison is the girl next door, Scott is your hard-hitting old guy, and Jayden is your take-no-prisoners, question-everything man. There were very few times their characters fell flat in the story, but watching Madison flirt with Ethan and watching them fall in love was something I haven't seen, nor the feeling I got from watching it unfold, since Final Fantasy X, and that was the very first game that ever made me cry. Perhaps not in the sense of bawling like a 3-year old, but there were a few tears running down my cheek when Yuna fell through Tidus, much like myself getting choked up watching Ethan trying to save Jason from being hit by the car. That is creating an emotional attachment between your fictitious character and your gamer.


Importing Considering SCEA chose not to release a special edition in the States, I had to import the European version. However, I was treated to the Taxidermist episode. Let's just say, it didn't feel like I was playing Madison Page, but more of Jill Valentine, and the taxidermist felt like Nemesis. It had to be said.
Heavy Rain is something you do not experience often. It is a journey that will come to your doorsteps only when it is time to do so. Think of it like Logan's Run: you may think games are fun and enjoyable, but when that red jewel in your hand begins to glow, that's when the real fun begins.