Another cat out of the bag today, Ubisoft's brand manager for the Tom Clancy franchise, Michael Verheijdt, said he's working on two new TC games, but if he said anything further, Mr. Fischer would be sent after you.

Seriously, that was it. So what's the purpose behind this post, rather than to inform you that Ubisoft is still utilizing entries in the franchises based off of one man's books that they bought the rights to? To make predictions, of course!

We know Ghost Recon: Future Soldier was announced, so that can't be it, unless Ubisoft is being more like Square Enix with Final Fantasy, I would be proud to predict that Ghost Recon: Universal Soldier is one of those new titles. Oh, wait...

Anyways, back to reality. EndWar 2 wasn't formally announced, but back in February, Ubisoft officially announced that development for the game had been "put on the backburner." Bummer, cause that first one wasn't all that hot to begin with.

The only other franchises we have are, you gottit, HAWX and Rainbow Six.

I'm just hoping they don't go with Rainbow Six 7 as the name. I think part of my brain asploded just then and there.

So I haven't said jack about the whole Dead Space 2 hooplah, with the Rorschach ink blots, with a supposed hidden date of April 29, 2010 (that's tomorrow for the calendar illiterate).

Well, someone got a little jumpy and uploaded a teaser trailer for the game on YouTube, which was subsequently pulled by YouTube because EA cried "copyright infringement."

With this leak, it goes hand-in-hand with another leak that Kotaku got a hold of a back in February of an apparent survey that outed both Dead Space: Extraction HD for XBLA and PSN, as well as something called Planet Cracker, a supposed prequel that plays in the homage of Command & Conquer, where you're harvesting materials:

"Another title, known as Planet Cracker, was potentially more interesting. Described as a "resource strategy game where players will manage a CEC Mining operation," Planet Cracker focuses players on attempting to "maximize their daily profit" and "defending their hard-won ore from Space Pirates." Sounds like Ore Tycoon aboard the USG Ishimura."

Looks like EA can't keep their shit together when it comes to this game in particular. With Microsoft messing up the Gears of War 3 unveil, you'd think that a press copy of the next Zelda game would magically fall in Kim Jong-il's lap tomorrow.

[RUMOR] North America Gets Black Wii in May 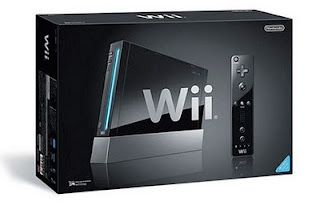 Multiple retail sources for Kotaku tell them that there is a new Wii bundle coming in May, but this time, we're getting black. Yes, a black Wii. The very same that Japan got last summer, and Europe got it this past fall. So, it only makes sense that NOA would give the Americans something a little...darker.

For those keeping track, I've been frothing over a black Wii ever since Iwata introduced the Revolution as a black unit, introduced a bevvy of colors to the system, limited it down to two colors (black and white), then finally scrapped black in favor of white. That was 3 and a half years ago.

Back to the news, Kotaku says the bundle will come with Wii Sports Resort and a MotionPlus attachment for $200. It's not a bad deal, considering the Wii Sports Resort/MotionPlus bundle is $50 in it's own. Throw that little guy on eBay, plus your white Wii, and you've got yourself a nice little chunk of change back in your pocket.

Considering all our controllers are black now, you wouldn't be surprised by this news, would you? Maybe their plumber has something to do with a new hardware bundle?
at 8:45 PM

You read that right: the world's biggest Nintendo fanboy (that has a real job) is leaving IGN, the site he helped create and raise, and is leading the charge on the App Store and it's games.

In his blog post about his departure, he had this to say:

"Beginning early May, I will join Apple as global editorial games manager, App Store. In a nutshell, I will be leading the charge for games on the App Store, so whether you browse through iTunes, iPhone, iPod Touch or iPad, the games content you see will be handpicked and organized by me and my team."

As I posted in a comment on Joystiq's article on it, I've been a long time reader of Matt's work, and I've been perusing IGN ever since it's IGN64 says.

Good luck, Matt. It's a good thing we've got a gamer on the inside. Perhaps you'll be handling my game, whenever that comes to fruition.

We all know the Midnight Riders, the southern-metal band in Left 4 Dead 2, right? We've killed zombies at one of their concerts at a pavilion, we listened to their new music on jukeboxes, but we never found their corpses, dead or zombified. But how's this for badass: their tour bus. Oh, and it's moving.

Rooster Teeth's Achievement Hunter guys (read: Geoff) found this, and it doesn't appear 100% of the time, but it's awesome nonetheless. Head past the break to view it (it automatically plays, and hearing that damned T-Mobile commercial over and over is annoying the piss out of me):

One of the new "The Passing"'s Avatar Award: A Hat 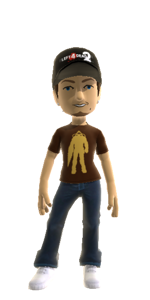 Notice that? The Left 4 Dead 2 hat on my Avatar's noggin? You get that from simply playing The Passing. Getting free shit for playing a game add-on that should've been free? Why yes, thank you.

The only thing I don't like about it - or any of the ballcaps - are that they are fucking gigantic, like my Avatar's head grew in size just by putting it on.

The other new item would be Gnome Chompski as a prop, and you get it by "playing any 6 Mutations." Haven't gotten it, but it shows up in the list under "Awards" in the guide.

I just beat the The Passing, and I have to say, the crossover is slightly underwhelming at first, but it does get better until it goes on.

Heed this warning: click "Read More," and you're in spoiler territory. Don't say I didn't warn you.

Email ThisBlogThis!Share to TwitterShare to FacebookShare to Pinterest
Labels: left 4 dead 2, the passing

Here I am, enjoying myself The Passing, and I come across a pool hall with a solitary table with a ton of writing on the wall (Chapter 2, mind you). As I'm inspecting it, I catch this on the left side as you enter: 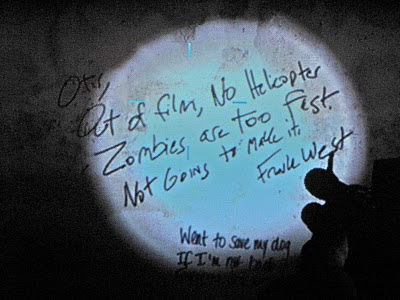 I had to mess with the values so it looked right.
For those who can't read it, it says:

Out of film, no helicopter.
Zombies are too fast.
Not going to make it.

So I guess that's why he's not in the sequel...

What Microsoft Needs To Do To Revamp Achievements

Yesterday, I got the full 1,000 available GamerScore for Assassin's Creed II. That makes my thirteenth game - according to my 360 - that I've gotten 100% Achievements for (15, if you count Resident Evil 5 and Tomb Raider: Legend, both of which I've earned all retail achievements). That's a pretty astonishing feat for myself, considering I don't necessarily go out of my way to nab all of the Achievements or Trophies in a 360 or PS3 game, respectively. For those wanting to keep record, I've gotten five Platinum Trophies for my PS3, and I've completed an additional two other games, bring that number to seven, fully completed games. Remember, when I say "fully completed," I mean "all Trophies/Achievements."

When Sony came into the "gamer rewards" program, they were pretty late to the game; the PS3 firmware update that enabled Trophy support hit nearly two years ago (July will be the two year mark), and that was two and a half years behind Microsoft and their Achievements system, which shat all over the industry, creating a unifying system that brought all games together, forcing gamers to become so-called Achievement Whores, increasing their - I fucking hate this phrase - "E-Peen." However, Sony did an incredibly interesting thing when they introduced the Platinum trophies.

Installing was a breeze, thanks to another Blogger user, TV Tech Girl, as her instructions on how to do so are simple and quick. Everything is dynamic, so updating/changing things around won't have me re-editing the code to the page.

You'll enjoy being able to login using your Facebook account now for easier commenting on your behalf, and allow me to track your ass down say if you decide to spam (bad mouthing really isn't that big of a deal, but don't get too deep in your own shit). This way, if you don't want to use your Google account, you won't have to make another account just to comment, and hopefully start to draw in more people with an easier commenting method.

Enjoy the new comment section, as I know I won't have to worry about those dickholes spamming anymore.

[MY GAME] I need to change the title...STAT

For some strange reason, I got a wild hair up my ass and Wiki'd "Dimetro," part of the name of the game I'm making, Project Dimetro. Turns out, "dimetro" isn't the bastardization of "Metroid," but rather the first half of the name for the dinosaur Dimetrodon.

That's not the reason.

There was a show called Dinosaucers, and one of the character's names was "Dimetro."

That's not the worst reason.

Email ThisBlogThis!Share to TwitterShare to FacebookShare to Pinterest
Labels: my game

As foreshadowed in my previous post on the Xbox 360 Slim, here are my predictions for E3 hardware. I'm not doing software here - I may do that later - but right now, I'm focusing on the three major companies and what they'll be bringing to the table.

The Xbox 360 Slim: Thoughts from the MotherBoard 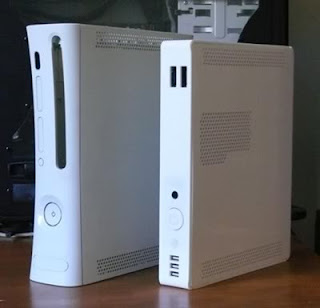 Image via VGCharts, via Mods n Bits (article no longer loads)
Yes, this is fake. It's a case mod.
I've been pondering over the facts that have been coming out ever since the leaked images of the supposed new motherboard for the Xbox 360, which lacks any Memory Unit ports (according to Ben Heck), and Major Nelson confirming the 120GB hard drive and MUs will be phased out in favor of 16GB, Sandisk supplied, 360 branded, USB flash drives coming with the April 6 firmware update.

Yes, all of the evidence at hand points to something. What that something is, a lot of people are already pointing their fingers and minds towards a unifying idea: the long rumored Xbox 360 Slim.

Really, that's about it. There is absolutely nothing cool about April this year, other than the fact you'll have some time to play around with the 300 releases from last month. Enjoy playing catch up.