I just beat the The Passing, and I have to say, the crossover is slightly underwhelming at first, but it does get better until it goes on.

Heed this warning: click "Read More," and you're in spoiler territory. Don't say I didn't warn you.


Here I am, fresh into The Passing, and low and behold, Zoey is atop a bridge mechanism, telling me to go around to the other side so they can help. Cool. No sweat.

That bit is the only L4D1 crossover you'll have until the end in Chapter 3, where as you pop out of your safehouse, you're greeted by the group, albeit, one short. Well, we know Zoey is alive and well (thank god), and Francis looms over the railing above, giving you that menacing, I'm-a-badass biker stare, and finally, Louis is sitting on the ground, down - but not out - due to a leg injury. Bye-bye Bill!

Or so I thought.

As I'm scrounging around for gas canisters to fill a generator to lower a section of bridge so we can drive across in the car from the mall, I run into a side room, only because an assault rifle catches my eye.

And so does a green beret.

Finally, the old, dirty-ass man himself, Bill, went out in a hail of gunfire, blood and zombie innards, as he lays against a turbine generator, clutching his last weapon: 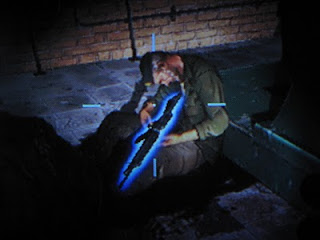 Again, like my Frank West-scribble image, the quality is bad (despite taking it with a PowerShot G10). Wasn't aiming for greatness, purely because Tanks and Spitters were flying in from nowhere, so time was of the essence.