This the first part in a four-part series of multiple, micro reviews. Over the course of the past 5 months, there have been numerous games that have come out that I have not reviewed, save for Heavy Rain and Darksiders. I have sixteen games lined up for reviews, so get ready for a smorgasbord of reviews coming to your face-hole.

It's been a while since my last review, and I have honestly tried to write reviews for several games I've played recently (Splinter Cell: Conviction is one), but the reviews just didn't fit cohesively with my overall writing scheme (witty remark-serious undertone-joke at someones expense-build up-LOVE/HATE-go out with a bang). So, here's a bunch of games I've played recently, kind of like a micro review. 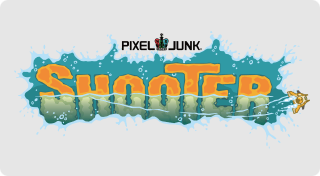 PixelJunk Shooter
Release Date: December 12, 2009
Platform: PlayStation Network/PS3
I loved this game. I'm a new fan to the PixelJunk series, which started with Eden. Shooter does great things with balancing out the obtainable power-ups (Magma Suit, Water Suit, etc.) and plays that into the environment, where you must think - and learn - about what elements counterbalance what, and also, what creates what. Lava and water creates rock, ice near water creates more ice, that black goo shit with water creates a toxic gas, and on and on. PJS is a great example of some of the rare gems that comes out of the PSN, and should be given the home that is your PS3's hard drive.


LOVED
Elemental Puzzles My adoration for these things is bewildering. I knew from the pre-release trailers that it was going to be awesome, and it was.
HATED
Way Too Goddamned Short Three overall worlds, with 5-8 stages each. I just hope PJS2 gives us more levels.
B-

Bayonetta
Release Date: January 5
Platform: Xbox 360
Great game by a great guy. Bayonetta herself is a sexy character to play, and there was some awesome attention to detail. The over-the-top gameplay doesn't lose the translation from Devil May Cry to this, because Hideki Kamiya is a talented man. The story is for shit - some interesting bits, and being an agnostic, I was a bit intrigued by the "Angels are the bad guys, akshully" concept - but it's a break from the fast paced gameplay.


LOVED
Bayonetta Herself Overly sexualized, but not to the point where your fapping arm gets tired. She's quickly rose to the near-top of my favorite video game characters, purely because her power comes from her hair, which is also her clothing, and she has fucking guns attached to her feet!
HATED
Rodin's Shop Where, exactly, do you think I can collect 4 million halos to buy one accessory? I think I ended with several hundred thousand collected overall, but 4 million for one? And there are many others that are much more expensive.

Platform: Wii
Thank god Travis is back, because I don't know what I'd do without him. The removal of the free-roam aspect is a highly welcomed change, as Santa Destroy kinda looked like shit, as did running around it. Jumping from battle to battle was much easier, but the fighting mechanic didn't really change for me. There were some areas that really didn't do too well for me (the parking lot leading up to Destroy Man's fight was just bad), but being able to change beam katanas on the fly was probably the best thing that has happened to this series. I can't say Suda 51 outdid himself here, but he made NMH1 look like shit.


LOVED
Dual Katanas See that on the box? The two beam katanas? Best weapon in the whole damned game. Sadly, they're the last ones you obtain. Doesn't matter, because I rarely found myself switching to something else.
HATED
Ryuji, That Fucking Motorcycle Boss Take him out of video game history. Worst thing I've had to do, and if this was on the 360, I'd have Microsoft have Todd McFarland hand craft an Achievement plaque commemorating the defeat of this absurdly difficult boss (he's an early one, too!) and the loss of a controller. Suda, don't do this again. Ever.
B-

This DLC filled in Sequences 12 and 13, the two that "glitched out" during AC2's story, and you ended up missing about 10 years of Ezio's life (plus, the part where he decided to grow a beard). What I really liked is when you boot up Sequence 12 (Battle of Forli), the hacker chick in your team tells you she was able to get this sequence up and running, and you can go into it and see what happened. Remember at the end of the story where she said she'd try to get them done so you'd have something to do on the way to their mountain retreat? Well, here you go! The DLC doesn't have a great story in it, as you really didn't miss anything in those 10 years, but being able to fill those gaps in helps.


LOVED
Bonfire of the Vanities There was actually more to do here, but it was masked under the pretense that you were searching for 9 people to kill. Hell, at least there was 9 of something to do.


HATED
Battle of Forli Asides from fighting alongside Catarina Sforza atop the fortress walls, this was the weaker of the two. Not too much going, sadly. No wonder it was cut.
BoF: D+
BotV: C+
at 4:57 PM