FINAL UPDATE: So, here it is, the end of the road for this. Just looked away from Jeri Ryan's Twitter page, and she said she "did [the role as Sonya] as a favor to a friend," and that the promo reel was "made for [Kevin Tancharoen] to sell WB on his vision for a reimagined MK film." There's no telling what WB thinks of it - yet - but one things for sure: testing a market reaction for the movie seems like it was in the cards, and if WB has any Internet Ninjas employed, they should know by now that 95% of the world wants this to happen. Yesterday.

UPDATE 3: Looks like "fan film" was true. Called Mortal Kombat: Rebirth, directed by Kevin Tancharoen, not Larnell Stovall as previoulsly reported (but he did do the fight scenes), this was nothing more than "a promo reel for the upcoming feature film," according to a report by Twitch. However, Twitch does not cite it's source as to who told them it was such. No matter, they do say for the upcoming film, so my hopes are officially still up.

UPDATE 2: It appears the Sub-Zero image seen in the trailer is actually a render by an artist under the name "FoOD" over at ZBrushCentral. The image was posted in March of 2009. It is unknown at this time if he has a helping hand in the creation of the new look or if the image was used without his permission. FoOD finally got back to the questions, and simply put, he was not aware, but says it was "pretty cool" to see it. Either way, this is evidence towards "fan movie," despite B-list actors in it and not your Average Joe.

UPDATE: According to Chud.com, this is real, and it's for the new movie. It's directed by Larnell Stovall, fight choreographer. His most recent work was Undisputed 3: Redemption.

ORIGINAL POST: A Kotaku reader sent this video to them, and it's, quite possibly, the best fucking thing I've seen about Mortal Kombat. Ever.

If you caught it yesterday, I put my theory out there on E3 that Mortal Kombat should make a surprise appearance. Surprise, indeed, as a YouTube account under the name "MortalKombatRebirth" posted the above video, and is starting to spread like herpes.

If you haven't watched it yet, there are spoilers below.


The trailer shows Captain Jackson Briggs (with the '-on' stickers on his office door conveniently missing) walking into an interrogation room, show files from two serial killers - codenames Reptile and Baraka - who are turning the city of Deacon inside out. Reptile is a man who suffers from a disease called Harlequin Ichthyosis (this shit is real), where the skin hardens, almost scale-like, and the eyes have turned inside out, looking like congealed blobs of coagulated blood. He kills his victims, severs the heads and stores them in a freezer. When he's hungry, he pulls one out and eats it. Baraka, on the other end the "bat-shit crazy" spectrum, was a failed doctor. He's killed 25 people so far, but he pierced his face - subdermal and hypodermal piercings - and has surgically implanted two 10" retractable blades into each of his forearms.

Jacks Jax tells our mystery inmate that their last contact with Baraka was through Johnny Cage. He's a movie star who's had his career hit rock bottom. The Deacon City Police Department hired Johnny to work with them undercover. Unfortunately, Baraka killed Johnny via decapitation. Sad, really. They've gotten word that a criminal mastermind, Shang Tsung, is holding a no-holds-barred fighting tournament, and they need their inmate buddy, Hanzo Hasashi to find where it is. Hanzo Hasashi was the top assassin of the Shirai Ryu, the most lethal gang in Japan, before his incarceration. Jax wants to put him back on the streets to find out more info about the tournament, and that Shang Tsung will find him to put him in the tournament (think Balls of Fury and Christopher Walken).

Telling them they have nothing to give him, including his freedom (we see our man is a master lockpicker, has he drops his handcuffs to the floor). Sonya Blade walks in with an FBI file, and lays it down in front of him labeled "Sub-Zero." Our man is immediately intrigued, and states he's dead. Sonya tells him he was photographed the day prior, he actually killed Sub-Zero's brother, and that he will be at the tournament. A clip plays of a man being stabbed in the neck with small harpoon, which expands, and he is pulled backwards. Upon getting up, he subtly agrees to help, and says that Hanzo Hasashi is dead; only Scorpion lives, showing us his pale, white eyes.

Check past the break for my thoughts on the trailer and character evaluations.


To me, it appears that the Mortal Kombat reboot is following the path of Christopher Nolan's Batman films, as they are down a darker, grittier, realistic view. As Nolan only portrays Batman villains that are not supernatural (Mr. Freeze, Poison Ivy, Clayface, etc.), this may be a realistic portrayal of the fighters from the universe. Reptile may loose his long tongue and acidic spit (despite the thumbnail I've uploaded alludes to it). Scorpion won't be seen as a skeleton or spectre, won't breathe fire and his kunai won't come out of his hand. Shang Tsung won't suck the soul out of his victim. Jax probably won't get bionic arms. They may only use fighters than can have their backstories spun around and make their existence in the real world believable.

Finally, there are a handful of characters in the trailer that I don't believe will make appearances in the tournament: Jax, Sonya, Reptile and - obviously - Johnny Cage. Sonya could show up as a surprise and seriously whomp some ass, but right now, she's a just a cop, same with Jax.

Characters are listed in order of appearance. Names not shown in trailer may not be spelled properly. Check out the image gallery here for more from the trailer.

Jackson Briggs (portrayed by Michael Jai White) : Captain of the Deacon City Police Department, his ability to contain the rampant murders throughout the city has been questioned by Governor Maldoun. Jax assures the public he's doing all he can, and has the full police force backing him. Jax seems to be to-the-point and pushes past the bullshit of who he talks to. Jackson does not display his trademark bionic arms, as these only became prevalent later in the series in Mortal Kombat 3. Besides, would that fly in a police department?

Hanzo Hasashi / Scorpion (portrayed by Ian Anthony Dale) : An inmate of the DCPD, who turned himself in. A skilled locksmith who can stealthily break free of his restraints, he was the top assassin of Japan's most lethal group, the Shirai Ryu. Scorpion does utilize his harpoon in his kills, which seems to be primarily for behind-the-back stealth kills. His eyes are glazed white, with no traces of the iris or pupil. It is unknown what causes this deformity, be it natural or artificial. He states "Hanzo Hasashi is dead. My name is Scorpion." In the games, Hanzo is killed by Sub-Zero and comes back as a spectre, who takes on Hanzo's codename Scorpion, and seeks revenge on him. Perhaps the line "Hanzo is dead" is an allusion to Sub-Zero being the reason why Hanzo turned himself in, and after prison, he's known as Scorpion, as "the man he once knew" no longer exists. Perhaps Sub-Zero has brought some damning evidence against Scorpion to the Shirai Ryu, which caused him to "surrender his freedom voluntarily," possibly seeking refuge from the clan in the form of incarceration in a prison.

Reptile : Standing six-foot-one and at 30 years of age, this man is only known by his codename. Born with a rare disease called harlequin type ickthyosis and given only weeks to live, his skin has turned scaly, unable to retain water. His mouth is a large, gaping circle that resembles more of a fish than a human. His eyes have formed inside out, as they have become a large, congealed blood pool. A mass murderer, his known fatalities are in the "double digits." His call-sign for his murders are decapitation, however, he stores the head in his refrigerator and eats them when he gets hungry. It is highly unlikely that Reptile will be a contender in the tournament, as he does not show any physical prowess in the trailer, is not seen fighting at all, and his disease renders him highly susceptible to deadly infections; mere contact with other people puts owners of HTI at risk of deadly infections. Reptile's existence is, more likely, purely for a "shock value" of the translation from over-the-top character to an in-the-real-world visualization, and his only point in the promo/movie is to be one of the serial killers - alongside Baraka - in the city that Scorpion is ordered to kill.

Dr. Alan Zane / Baraka (portrayed by Lateef Crowder): Once a plastic surgeon, a botched surgery left his patient dead on the table. Dr. Zane became mentally unstable, killing two dozen more people. Piercing the skin on his face using both subdermal and hypodermal techniques, he has also surgically grafted two, 10" blades into his forearms, which are retractable, and has long dreadlocks. He displays animal-like behavior and strength during combat, running on all fours and using the environment to his advantage. He is the cause of Johnny Cage's death.

Johnny Cage (portrayed by Matt Mullins): Once a great action hero, Johnny's career went down the slopes quick. He was hired by the DCPD to go undercover and locate Baraka. He was successful, and found out that a secret, martial arts tournament is underway, held by a man named Shang Tsung. The next day, Johnny fought Baraka, and lost both his life and his head.

Shang Tsung (possibly portrayed by Russell Wong): Supposed "ring leader" behind both Baraka and Reptile, it was reported to the DCPD via Johnny Cage that he his holding a martial arts tournament and is scouting for competitors. Very little is known about him.

Sonya Blade (portrayed by Jeri Ryan) : Sonya works alongside Jax in the DCPD, and not much was given during the initial trailer. A tie to the FBI can be drawn, as she enters the interrogation between Jax and Scorpion with an FBI file on Sub-Zero. 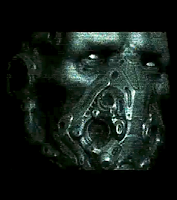 Sub-Zero : Only known to exist via an FBI file retrieved by Sonya, Sub-Zero was thought to have been killed by Scorpion. Little did he know is that he killed his brother, and Sub-Zero will be at the tournament, the driving force behind Scorpion's cooperation. His eyes are a pale white, similar to Scorpions, and wears a breathing apparatus that covers both his nose and face.
at 3:31 PM