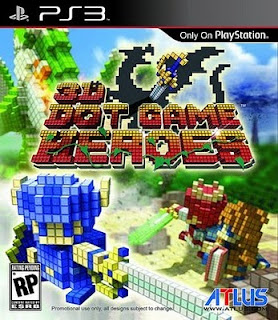 Nostalgia at it's finest. 3D Dot Game Heroes has to be one of the most pleasurable games I've played in a very long time, simply because it speaks to the Zelda nerd in me. Once I initially heard about this, I figured that Nintendo may reign down some sort of C&D letter upon Atlus, but, alas, they didn't and we are able to partake in such a wondrous entity that is 3D Dot Game Heroes.

From the logo to the title screen, the music to the action, the characters to the enemies, this game epitomizes what it is to be a Zelda clone. There are some faults in this game, and with that, I can safely say that, to many, 3DDGH is to The Legend of Zelda as Heavenly Sword is to God of War. Both entries pay their homage-dues to their respective fathers in many ways, and it's here that 3DDGH excels at having it's way with your emotions, as if you were 5 years old again playing through the first Zelda game, aimlessly wandering around an unfamiliar land without any sort of direction.

Well, I should back up a smidge. There is a sense of direction in this game, as it does give you a map, something Zelda didn't. It's not as flourished as one would expect, but venture into the areas enough times, and you will start to see the environment in it's 1/8th size. The gameplay is your classic top-down camera view, looking around, swinging your sword at anything with - and without - a pulse, mowing your way through the game. It's hard for me to paint a picture of this game, because, as many gamers, including myself, have said before, all you have to do is picture classic Zelda gameplay, replace the names and you've got it.


LOVED
Classic, Loveable Gameplay It's gameplay that I have not been able to fully enjoy in a new title in many years, so 3DDGH really does help to fill the void that is being squished into a smaller and smaller space by first-person shooters and 3D platformers.
Character Creator Thank you, Baby Jesus, for this. I've downloaded so many custom creations from The Georama's 3DDGH forum. I tinkered with a Samus creation, but inevitably, played through as if I were Link from the original Zelda game. If Nintendo characters aren't your bag, there's a slew of Final Fantasy, Castlevania, Halo and many other franchises with their respective characters. Hell, there's even Transformers. Want to switch? As you load your file save, it will ask you, so you could, effectively, play through the entire game as a handful of different people.


HATED
That Goddamned Difficulty Ramp In every game like this, the game will nustle you into it's nostalgic bed comforter, and after the second dungeon, BLAM! It throws you out of bed, still in your boxers, slams the front door on you and it's 30 degrees outside. You've got a stick in hand, a hunk of plywood in the other, and your dignity is dwindling away quicker and quicker. This game is no exception, so don't come in with your head held high. Unless you have a walkthough sitting in front you.
This kind of dedication to a genre of yore is something that should be respected. That respect should be shown in obtaining a copy by any means necessary (buying, renting, maiming your next door neighbor for their copy) and playing the hell of out it. 3D Dot Game Heroes is a wondrous experience, and I would be a damned idiot to tell you to skip it.