This the third part in a four-part series of multiple, micro reviews. Over the course of the past 5 months, there have been numerous games that have come out that I have not reviewed, save for Heavy Rain and Darksiders. I have sixteen games lined up for reviews, so get ready for a smorgasbord of reviews coming to your face-hole. 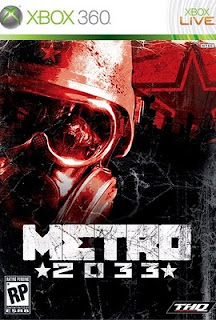 Metro 2033
Release Date: March 16
Platform: Xbox 360
What to say about this game? It had potential to be a great game, but came out to be above average. Don't get me wrong, I liked Metro 2033, but don't think that by calling it "above average" is demeaning at all; it's not.

The game's setting - post-apocalyptic Russia, set primarily within the metro system - is very intriguing, including the fact that this is based on a book. That is what really shocked me, and I began to hold this game to a higher regard. The fact that the subway lines seem so much more desolate considering they're not maintained anymore, I felt that the civilization was 100 years behind where they stood in time (literally, I felt like I was in the 1930s, or even earlier). That ambiance is something that I truly enjoyed.

Considering not everyone is working with each other - there are different factions, different clicks, different strokes, different folks - you never know who your enemy is, other than the obvious threat that resides on the surface now. Even the prostitutes are out to get you! You're having to keep a constant eye over your shoulder, as not everyone is on your side. They even threw in the Reds and Nazis!


LOVED
The Aura I can't put my finger on it, but the traversing between the safe, underground metro and the toxic surface - traverseable for a very short time without your gas mask - had a quasi "duality effect" on me. You typically think of the underground as something that you'd dare never spend more time in than you need to, but considering this is where you are living now, that mentality has to be thrown out; brown is the new blue.


HATED
A Smidge Too Linear The game, despite housing itself within Moscow's metro system, felt oddly too linear. The map at the end of the game - after it's done tracking your progress - shows you making one gigantic U-turn, and there are far too many places you don't visit in the world. This has potential to create sequels, or even an MMO of the universe, where the entire underground is navigable at your will.
C+ 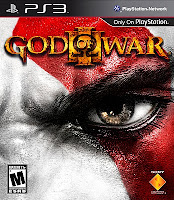 God of War III
Release Date: March 16
Platform: PS3
God of War III is something I have been waiting for for a long time. Ever since it was teased at the end of GoW II, and the back-of-the-booklet treatment it got for those who bought Chains of Olympus. This is a mighty return to Athens, even if it does make you think if he's still alive or not.

The gameplay has not changed one bit, save for the addition of new combos/weapons/items that help Kratos along the way. Some of the boss fights - Poseidon - are truly epic in size, and the areas you visit - Daedalus' Labyrinth - are just as large. Santa Monica really did go all out in terms of getting some absolutely huge structures in the game, no matter the locale, but I feel that they went "even bigger" purely because the PS3 could allow them to, which, at times, didn't feel right.

The ending of the story truly has the fan in me screaming for his brother's entry into the series, as it's been foreshadowed since the first game. Reading about Jaffe's original story concept that had Kratos killing Greek mythology, then working his way Norse (Odin, Thor, Loki, etc, etc), really had me wishing Jaffe stayed on board as director. I really felt that Cory Balrog shouldn't have deviated from that original story arc when he took over as director on GoW II (his idea was that Kratos became Death, and his Blades became Scythes), and that Stig Asmussen should have stayed put as the lead environment artist instead of directing this one (which I can see he had a heavy influence in the boss battles, using more of the environment in the fights than before). It would seem I would want them to milk the franchise, but hey, at least there were plans to continue the series by killing other gods.


LOVED
Puzzles These have always been a favorite of mine, despite being the secondary gameplay element of the series. Hera's Garden was a favorite.


HATED
The "New" Weapons Out of the four main weapons you have, only one doesn't have the business end attached to chains (Hercules' Gauntlets). Every other weapon is a chained variant of the Blades of Chaos Exile.
B+

Perfect Dark HD
Release Date: March 17
Platform: Xbox 360 / Xbox Live Arcade
This is my first time playing the original Perfect Dark, so you'll have to bear with me, as I had to put myself in "GoldenEye Mode" to fully appreciate this game. And appreciate is something that I did...to a certain extent. This review is not about the changes they made - as many reviews are, seeing as they played the original version when it debuted 10 years ago (2 weeks ago this Saturday marks the 10th anniversary) - but rather the game as a whole.

PD: Zero was my first foray into the universe of Joanna Dark, and I have to say, what the fuck did Rare do? Being able to play the first one solidified the idea that Rare seriously screwed up the prequel; hell, I knew it was a bad game when I first played it at the 360's launch. But Perfect Dark is a treasure; it truly is. The story is a bit wonky, and the updated texture maps help a lot in translation, but throwing high-res textures on early 3D polygons is like adding anti-aliasing to 8-bit games, dubbed "pixel smoothing"; most of the time, it doesn't work. Here, Rare came thru and really threw a nice polish on the game, and it's the best $10 I spent on the Arcade in a while.


LOVED
The Closest We'll Get to a GoldenEye Remake on...Anything It really is, considering there are around 4 or 5 different companies gamers would have to wait on before a remake/port of the game becomes available. I actually started up a lone multiplayer match just so I could run through Facility and climb through the vents.
HATED
The Final Boss I can't beat it for the life of me. Seriously, I can't. Perhaps it's how they mapped the controls, or the floaty cross-hairs the game features. Either way, I can't beat the game, as sad as it sounds.


It's about time we get to play as Sam Fisher again. I was starting to get worried that his emover got in his eyes and he couldn't see where he was going.
Badass: The Game is a very well executed piece of code, even if it is a tad easy. The Mark & Execute function is a godsend to those wanting to feel like a complete badass, and thank god it's balanced out by having to melee/enviro-kill an enemy before using it. You can target up to 4 enemies at once, depending on what weapon you have and what attachments you have bought. You can only buy 3 preset upgrades, and you don't always get a supressor, which, truth be told, if there wasn't a supressor, I didn't bother with that gun; the Five-Seven and I became best of buds by the end.
The only problem I have with Splinter Cell is that it feels that Ubisoft is taking one game - Prince of Persia - and running through it with a fine-toothed comb, hoping a tasty morsel falls out, and in their case, they squeezed out Assassin's Creed and Splinter Cell. That's not to say that it's a bad thing, but seeing the vast amount of cross-overs they're doing with their characters, it wouldn't be hard to make Splinter Cell: Persian Assassin. I just hope that if they do make a sixth entry - which I don't see how they could, considering the story - that they do enough to make it not seem like Assassin's Creed with high-tech weaponry.
LOVED
Mark & Execute Truly, to feel like a badass in a game, you need to pop a few people off a once. Being able to bring down 4 people at once - sometimes 5, if you know what you're doing - is very pleasing, even if it does make the game a tad easier than previous entries.
HATED
"Where Are Ya, Fisher?" These guards never shut their fucking mouths, especially when there is a highly-trained, government assassin lurking in the shadows who can kill you with a paper clip, some string and a grain of salt, and they're just mouthing off, giving away their out-in-the-open status. I'm glad I'm not the only one who feels this way.
B
at 12:03 PM