This the final part in a four-part series of multiple, micro reviews. Over the course of the past 5 months, there have been numerous games that have come out that I have not reviewed, save for Heavy Rain and Darksiders. I have sixteen games lined up for reviews, so get ready for a smorgasbord of reviews coming to your face-hole.

I'm a fan of Suda 51, I really am. Killer7 was amazing, which is what first turned me onto the man. I had been waiting for a return to something of that extra-gory content, and when Heroes was announced (the original title), I was ecstatic. So you could image my glee when the game would be receiving an HD-ified port to the 360 and PS3, but I'm sure you also my despise that Ubisoft didn't pick it up for localization for the States and it stayed Japan only. Thank god for Sony having the PS3 region-free, because otherwise, I wouldn't be able to satisfy my hunger for this game.


The big differences here are the reworked controls - which don't work sometimes - and the increased textures. I only fought Death Metal (the first UAA assassin), but had my attention deviated thanks to the three games below. I played the majority of the original on the Wii, defeating Harvey the magician, so the review is solely about the transition from the Wii to the PS3.

LOVED
Nothing Changed In a good way, the spirit of Travis and No More Heroes was preserved, but a lot of it's campy feeling got lost, mainly due to no motion controls and glitches. The increased textures are welcomed, but why does everything seems so damned shiny? I've never seen a pair of jeans emit to much glare in my life. If the God of War Collection is the right way to port games to a high-powered system, then No More Heroes: Heroes' Paradise is the wrong way.

HATED
Re-mapped Controls Yes, I'm complaining about the controls, because some of the things you have to do - like the death blows to regular enemies - aren't fully intuitive. With Death Blows, the prompt will come up, but you have to hit (R3) before you can tilt the analog sticks in whichever direction you need to. In the Wii version, all you had to do was move the controllers in the direction it told you to.

L4D2 DLC: The Passing
Release Date: April 22
Platform: Xbox 360 / Marketplace
We know my distaste for the previous campaign-related DLC for a game in this series, so you're probably walking into this thinking the same. To be honest, the inclusion of the original cast of L4D is probably what saved this piece of campaign DLC, because, honestly, it wasn't all that hot. It's primarily you having to go around a bridge without hydraulics working because the L4D cast - minus one, with another wounded - can't get gas into the generator to power the piece of the bridge so you can continue driving the car you stole from the mall (The Passing takes place between Dead Center and Dark Carnival). The game's different chapters borrow heavily from elements from other campaigns, so if you play The Passing, you'll get a feel for what's to come instantly.

LOVED
The Crossover The first half of the planned crossover between the two cast member sets is what got my so excited to play this, to be able to interact with them and actually get to see a group of characters that actually have soul and can be related to. Except for Bill, obviously.

HATED
Again, Too Short Just like with Crash Course, this DLC doesn't offer four full sub-chapters, but only 3. It's better than Crash Course's two sub-chapters, but come on, Valve. Stop skimping on the DLC, especially when you're being forced to charge $7 for on XBLM because Microsoft told you to, whereas the Steam counterpart is free. 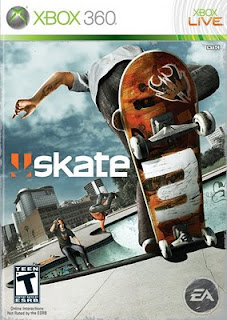 Skate 3
Release Date: May 11
Platform: Xbox 360
For those who don't know, I used to skateboard. And when I say "skateboard," I mean I had a deck (a World Industries deck, Independent trucks, Lucky 5 bearings) but couldn't do shit except for one thing: a 540º Casper Flip. Is it sad that I could actually execute a fairly hard dark flip, but couldn't ollie worth shit? Yes it is.


Skate 3, the third installment in the Skate series to shit all over Activision and the Tony Hawk franchise, is what Skate 2 should have been, and then some. The new additions to Skate 3 - darkcatches and flips, a fluffed up Hall of Meat, Coach Frank, team battles, "board sales," custom logos - are all highly welcomed. Well, let me stop myself there for a second. Board sales seem like a cheap leveling up system; I blew through the 1,000,000 board sales cap in about 2 days. The inclusion of an on-screen flick-it helper really does help you figure out why you can't get that 360 Flip to work after trying for hours on end in Rob & Big's challenge in the last game (good holy fuck that was irritating). All the updates to Skate 3 make me wonder how they can make Skate 4 any better.

LOVED
Coach Frank I like Jason Lee. I don't love him, but he's a great comedian. Never watched My Name is Earl, but his work with Kevin Smith is hysterical. Coach Frank seems like a mixture of both Earl and Brodie, so it spoke volumes to me. Except for those shorts.
HATED
Pooled Objectives You could read that two ways. When you've got an objective that requires you to complete multiple tricks, with only 4 at a time shown, or when you have said requirements and you're limited to a pool. Some of the tricks are absolutely ridiculous to perform - even on easy - until you exploit the item dropping function and use ramps to help gain speed off of an adjacent house to make an otherwise near-impossible spine transfer.


I like Prince of Persia. I liked the 2008 subtitle-less entry in the series - despite many hating it - so when I heard the newest entry would be an interquel, placing itself between Sands of Time and Warrior Within, I was heavily intrigued, mainly to see how the Prince is fairing now.
Pretty damned good, actually. The new elemental-based abilities were interesting, to say the least. The water "freezing" was particularly a favorite, but some of the other abilities seemed they were there just to be there. Stone Shield wasn't used too often, Flame Trail wasn't used at all, and that ice thing was used for a whole three minutes before deemed "utterly useless," with only the Wirlwind ability taking up most, if not all, of the magic at the Prince's disposal. However, these abilities didn't detract from the Prince's parkour, which did get cumbersome at times.


LOVED
Back to the Prince We Know and Love Don't get me wrong, Nolan North's Prince was pretty good - not a fan of the gauntlet - but I missed this Prince. Hearing the witty charm he had while scaling the outside of the fortress during the beginning brought memories of the last-gen trilogy flooding back.


HATED
Wall Scaling, Now With Complexity I'm sorry, but you took something entirely easy to master, and now you've mucked it up something awful. Why am I holding [RT] to run up any wall? What happened to A? By the end, I became accustomed to it, but at the beginning, I was seriously wondering what bug crawled up Ubisoft's ass that caused them to change their climbing mechanics in the franchise. Bad move.
B-
at 8:35 PM