Why Hate on a Potentially Good Sequel?

Yesterday, Creative Director Patrice Désilets left Ubisoft Montreal, and the one thing people are contributing his departure to is Ubisoft's recent announcement that they are, basically, following in Activision's footsteps and release yearly sequels to it's more successful brands. He's not the only Ubisoft leader that has left. Remember Jade Raymond? Sure you do. She worked on Assassin's Creed 1 and left shortly after. Don't forget Clint Hocking, who left Ubisoft recently as well, and this guy was another creative director, mainly working on FarCry 2 and Splinter Cell: Conviction. Yea, that guy. 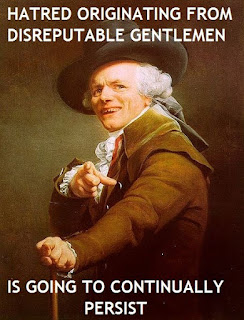 What my focus on right now is the hate towards the decision to actually make and release Assassin's Creed: Brotherhood this year, which said hate could be deriving from the über-hatred that Valve received when it announced Left 4 Dead 2 at last year's E3; boycotts galore. But the one thing we all did once we actually played the game? We shut the fuck up.

Since Patrice's decision to leave Ubisoft is heavily believed to be due to Ubisoft's decision to ramp-up production release dates for particular franchises (the only one's I can immediately think of that would be affected would be the Tom Clancy brand - Ghost Recon, Splinter Cell, HAWX, End-War and Rainbow Six - and Assassin's Creed) and become infected with the "Annual Sequel Syndrome" - or "A.S.S" - something that is currently infecting Activision and EA, the latter of which is oft-believed to be the originator of this disease. There is one draw back to release annual entries in popular franchises, and that is the lack or quality in the overall product, but if there is one thing we can look back on and say "Holy shit, how'd they do it?", it would be The Legend of Zelda: Majora's Mask.

For those who don't remember, don't know, or just don't give a shit, Shigeru Miyamoto, upon completion of Ocarina of Time, didn't want to make his fans wait another 5 years between Zelda games (such as they did between Link's Awakening and Ocarina), so he entrusted his newest companion, Eiji Aonuma, to make a new Zelda game. The only problem is that Shiggy gave him only 18 months to make the damn thing. Eiji was allowed to re-use most of Ocarina's resources, as well as the engine, to make the game. With the time constraint, he crafted the notorious 3-day system, which allowed a level of intense complexity, but gave the game a compact feeling. Majora's Mask was release 17 months after Ocarina's release (November of '98 to April of '00), and was met with univeral acclaim (Metacritic's words, shared by my agreement); Majora's Mask stands at an incredibly respectable 95/100 based on 27 reviews, with a GameRanking of 91.8%. Ocarina is at a very-tough-to-beat 99/100 based on 22 reviews with a 97.48% GameRanking. That's fucking insane. Uncharted 2 has 96/100 based on 101 reviews. Yea, Majora's Mask trails Uncharted 2 by one point. Suck it.


It was incredibly unheard of to see a new Zelda game so quickly after the previous one (the Oracle games came out just one year later, but Capcom was the one that handled those two), especially when the next-generation of consoles was around the bend. Nowadays, we see many franchises seeing new entries every year to satisfy not the gamer's wants, but the publisher's greed. It's always a rule of thumb: the more time spent on developing a game, the better the game. However, there is a thin line between spending enough time on a game (Uncharted 2; ~2 years) and spending too much time on a game (Prey; 11 years). It is acceptable to speed up the process of making a game when you get to re-use - or recycle - elements from the previous installment. This is including resources - art, renders, cutting-room-floor denizens, etc. - or even the game's engine itself. This is how Eiji was able to put out such a quality game in such a short amount of time.

Sadly, not everyone sees recycling game elements as a good thing. Just talk to Left 4 Dead 2 boycotters; they fucking hated it. However, the hate derived from Valve promising they would deliver post-release DLC via Steam and Xbox Live to flesh out the experience of the original game. Sadly, just 8 months after the series first installment hit, Valve announced the sequel. Boycotters began knocking on Gabe Newell's metaphorical door and demanding answers. Not one to be dismayed by his fans, Gabe flew three of the top boycotter's to Valve's HQ, sat them in front of a monitor and said "play." The three walked in with hatred and skepticism, but walked out with their heads held high - perhaps by Gabe's marionette handle - feeling confident that Valve wasn't rushing it. Of course, the sequel didn't have the same aura as the original - mainly, the cast was highly unlikeable - but the spirit of the franchise was alive and well, and with recently released DLC chapter The Passing bringing back the original cast as a cameo appearance - sans one - plus another DLC chapter exclusively for the original game that explains why Zoey & Co. got from Pennsylvania to The Deep South, or more over, why they left the "safety" of the military. Valve is doing a service to the fans to keep them from getting pissy with them. Now, about Episode 3...

The problem with Ubisoft's decision to market themselves like Activision is exactly that; they aren't watching what they say. Here at Destroyed Controller, with our advanced PR-Speak Bullshit-Shifter, we can translate Ubisoft's statement about wanting their developers to "create something innovative every year that can surprise the end user" from that to "rehash materials from a game that we've already recouped money from 10 times over, put into a new experience and charge full price? Hellz yes!" I digress, as I'm actually trying to defend Ubisoft here. Despite their go-with-the-flow attitude, they can, honestly, crank out fresh installments in their franchises, using the same development team, and still be credible. If Ubisoft can do for Brotherhood what Nintendo did for Majora's Mask, then we have ourselves a fucking winner. I leave you with my comment on the story Kotaku ran earlier today about Patrice's departure:

I don't really see where the fuss about a sequel a year later is coming from (cue L4D2-related comments and Treyarch insults). Ubisoft is doing with Brotherhood what Nintendo did with Majora's Mask. They're reusing elements, the engine, resources, anything you can think of, and putting out an expansion to the story of sorts (whichever way Ubisoft first explained this, I will never quite fully understand myself).

They're recycling. That may not come across as flattering to some, and most will scoff at the "what's all the hubbub, bub?" line at the top of this very comment. If they have the resources to be used towards a new game, and they honestly feel that Brotherhood won't feel rushed when you play it, then, by all means, give us more.

I, for one, don't like the Annual Sequel Syndrome that publishers/developers will follow; most of the time, it's just giving you rehashed bullshit with very little improvement on gameplay that tries to justifies to you spending another $60 on a game you played last year. To help curb this, they'll bring in a sub-par development team to put a game in between entries from the lead-team, which takes two-years to make each installment, and they leap-frog over each other. This, mostly, results in the games' quality flip-flopping: good/bad/good/bad. It doesn't take a rocket scientist to figure out who I'm talking about here (for a hint, their names rhyme with "Shmeyarch" and "Blanfinity Blard"). Prime examples of A.S.S. (not intentional, BTW) are just about any sports games (Madden, especially) and rhythm/music based games (Guitar Hero, primarily).

Going back to the Majora's Mask line, Shiggy gave Eiji 18 months to make the game. They re-used OoT's engine and resources, and given the time constraint to Eiji, he came up with the 3-day system, to help with the overall development process. Considering this made the game feel small, it's very similar in scope to limiting Ezio to just Rome, and the upgrade elements from the Monteriggioni are used all throughout Rome.

Brotherhood is this generations Majora's Mask, and that game wasn't all that bad. Hell, some people like MM /more/ than OoT.