Yes, I'm using this image again. Fuck off.
So sue me, I'm a week late. But I just got word on the comic for Assassin's Creed.

Set in the early 20th century (read: 1900's), you take on the adventure of one, Nikolai Orelov. The whole teaser video was talking about the Tunguska tragedy - you know, that huge, monster ass explosion in Siberia in 1908 - and the narrator apparently knows how it happened because he was there. 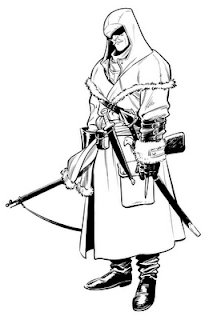 For the juicy bits, Nikolai's descendant is not series-staple Desmond Miles, but Daniel Cross, a recovering drug addict. As Cameron Stewart put it: "We start with [Orelov] when he is a very young man, a novice, and as the story goes on he gets older, and we see the changes and effect that being in the [Assassin's] Order has on his life." The reason for introducing a new Assassin and an equally new modern day newbie is because of the canon put in place by the first game: Desmond wasn't the only test subject. He was number 17, and the guy before lost his fucking mind (which, his invisible scribbles are what are alluding to future locals to romp in).

They promise to weave in other important aspects of the series - the Animus, the Assassin's guild, and the Templars - including the whole "re-write history" bit. Key elements throughout Russia's history will be tied into the game, but not too much, as they feel that oversaturation would kill the experience for the reader (Rasputin has already been confirmed to not be in the story, despite existing during this time). A lot of research is being put into the comic, too. Both Cameron and Karl ventured out to St. Petersberg for a week, and returned to the States just days prior to Comic-Con.

There is good news who find the aspect of a comic book for a highly successful - and incredibly fun - series a bit wonky, is that the Daniel/Nikolai combo are being treated as a very important addition to the lore, and that they may be intertwined into future Assassin's Creed...things. A video game isn't out of the question. As IGN puts it:

And while [Cameron] Stewart and [Karl] Kerschl have the entire life of this Russian assassin mapped out, Ubisoft does intend for Orelov to become a permanent part of Assassin's Creed lore. His life is not being considered a side project and will not be forgotten, even having the potential to be developed into games in the future (though to what capacity is uncertain). Ubisoft made it clear to us that it sees Orelov and Cross as important as Ezio, Altair or Desmond, and their language and approach certainly seem to bear that out.

The 3-part comic is due out later this year. I'm expecting it around AC: Brotherhood's release on November 16.