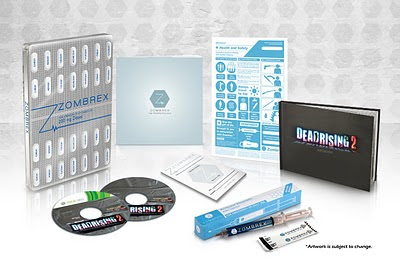 We may all know how much I despise country-exclusive limited editions, but hey, this one is US only! Despite the irony in this, Dead Rising 2 is Canadian made, Japanese published, yet US gets the collector's edition. Strange how this works, right?

This special edition, dubbed as the Zombrex Edition, runs you $80, and both the PS3 and 360 gets you this:


The PS3 version scores you a voucher for an XMB Dynamic Theme and a "Blu-Ray Disc featuring a High-Definition 24 minute “Making of” featurette".

The 360 version gets a "high-def version" of the above 24-minute "Making of" featurette plus the 83-minute “Zombrex Dead Rising Sun” motion picture, made by Keiji Inafune himself.


In news related to the Dead Rising movie mentioned above, the release schedule for it has also been revealed, which, something unbeknownst to myself, is exclusive to Xbox Live and the official website, deadrisingsun.com, albeit, it releases on XBL a few days earlier:


Keep in mind, Dead Rising 2 launches September 28, a month after the final episode appears on XBL, but these episodes are free. But, the special edition comes with an unedited version of the movie, so you're paying for convenience...and being late to the party.