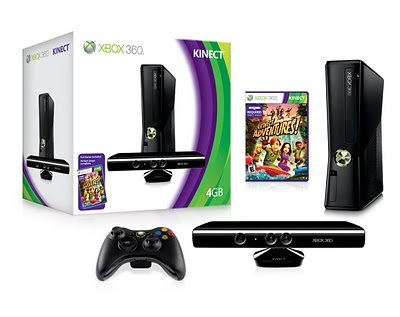 4GB Xbox 360 Slim with Kinect/Kinect Adventures bundle
Major Nelson just updated his blog with information about Kinect's pricing, and boy, let me tell you something...

Kinect will launch on November 4 for the oft-rumored $150 (bundled with Kinect Adventures), while Kinect games are going for $50 a pop. Putting that in contrast with Move, the controllers run $50/$30, depending on your flavor, plus the PlayStation Eye that's $40 that you'll need. One set of controllers plus the Eye puts you at $120. Move's games are priced at $40 each.

Now for something jucier: the Xbox 360 Slim is getting a 4GB version (internal memory) on August 3 for $200, replacing the Arcade unit that's out right now. And yes, there is built-in Wi-Fi on this model.

Even better: the Holiday bundle that Microsoft offers every year is the 4GB model with the aforementioned Kinect bundle (pictured above). This is going to sell for $300 when Kinect launches.

Now, as many have stated before, $150 is "too much." I'm not the first to say it, but I'll be damned if I try to justify it after this point: if games are $50, and the Kinect bundle comes with one, then Kinect is effectively $100, and Microsoft is pulling a Nintendo here with the pricing (bundle a game in, add $50, say it's a "deal").

Sorry, but unless the 250GB Xbox 360 Slim doesn't have a bundle, then I'm not buying Kinect. Sorry.