[ANALYSIS] Microsoft Prices Out "Cost of Ownership" For Motion Gaming

You've gotta love this one. After Major Nelson posted the official pricing for Kinect, gamers began criticizing Microsoft's expensive approach. Well, Microsoft was quick with the Reggie-style graphs, and cranked out these lovely beauties (originally spotted on Kotaku): 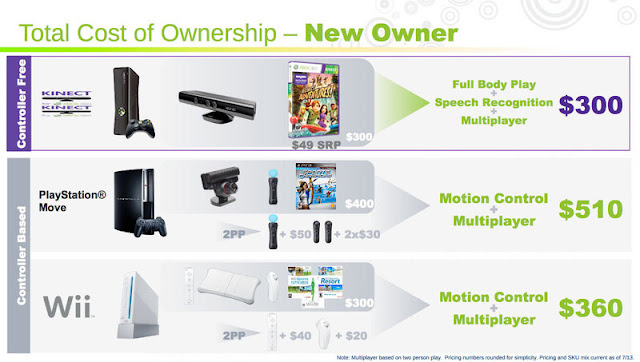 First, we see Microsoft trying to justify the price of Kinect. They say that Kinect is cheaper for a new system owner across all three systems. They undercut Nintendo by $60, and Sony by a whopping $210. That's not all. 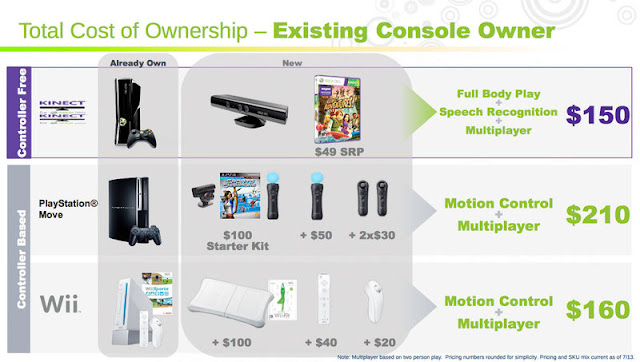 Here, they take on existing system owners, which I fall into (for all three). Kinect is just $10 shy of Nintendo, where as Sony is a full next-gen game above Microsoft. Let's delve past through the corporate bullshit and get some rectifying done.


[NOTE: The below estimates are for the cheapest solution, and for motion gaming only; Kinect is controller-free, so there is no need to add in additional costs for a 360 controller.]

New Owner
First off, let's take on Microsoft, since they started this whole debacle. They state that their setup will set you back $300 on the dot. You're hooked up with the Xbox 360 Slim 4GB w/ Kinect bundle, which comes with, you gottit, an Xbox 360 Slim in the 4GB flavor, Kinect, and Kinect Adventures. Separately, these items would be $350. That bundle saved you $50. If you're buying the system for just Kinect games - you know who you are - each of those are $50. There's not much room for error, as out of the box, the 360 now comes with just about everything you need to setup the system initially. Unless you want to hook it up to a TV via an HD source, you'll need to splurge for component or HDMI cables; however, we're going for the cheapest solution.

Sadly, it appears that Microsoft is saying that Kinect will only support two people at a time. Want a third player in on the fun? Sorry, tough shit. Booting your friend out of Kinect's field of view is the only way to have someone else play. That, or Xbox Live. But how many of your friends are going to shell out $150 for Kinect? Yea, that's what I thought.

Difference : $0 - Great, considering the system comes with what you'll need for both single and multi-player motion environments.

Microsoft says that all you'll need if you already own a 360 is the Kinect bundle, which comes with a game. This is true. If you already own a 360, Kinect is it. However, Microsoft fails to mention that if you have a 360 Duke, the Kinect will need a USB port plus it's own power source. The 360 Slim has an auxiliary port for the Kinect, which will provide power and connect it to the system. If you don't have a power strip, you'll need one if you have the 360 Duke.

Difference : $0 - Again, Microsoft gets points for getting it right for themselves. Add about $10-$15 if for those who'll need a power strip.

New Owner
At a whopping $510, Microsoft is saying Sony's entry is going to be the most costly. Now, the PS3 Sports Champion System Bundle is $400 MSRP. That comes with the PS3 Slim and it's regular contents, a PlayStation Eye, one Motion Controller and a copy of Sports Champion. Separately, you're looking at $430, a paltry savings of $30, about half of Microsoft's bundle. Now, here comes the doozy. Microsoft adds in 2-player pricing, adding in an additional Motion Controller, plus two Navigation Controllers. This additional hardware is $110 in controllers.

Little does Microsoft mention is that you can opt to use your existing SIXAXIS/DualShock 3 in place of a Navigation Controller. A bit wonky in theory, yes, but it saves you $30. Take out that $60, and you bring that down to $450.

Difference : $0 / -$60 (12%) : So, we can probably excuse Microsoft for forgetting that you can use a standard PS3 controller in favor of a Navi Controller. You'll probably tire of holding something with extra weight and will probably succumb to buying one, but out of the gate, you're looking at saving the most. Still, the PS3 ends up being more expensive than Kinect for new users, purely because the PS3 is more costly of the three systems.


Existing Owner
Again, Microsoft has a fairly steep number for Sony, set at $210. This is for the Sports Champion bundle, plus added controllers for multi-player. Again, Microsoft doesn't factor in DualShock 3/SIXAXIS compatibility with Move as a replacement for the Navi Controller.

Difference : $0 / -$60 (29%) - Not bad. For a single user, you're set with the Sports Champion Bundle, which gets you the EyeToy, a Motion Controller and a game. Again, substituting a DualShock 3/SIXAXIS for a Navi Controller, and you save $60 for two of them.

New Owner
Oh boy, where do I start? Microsoft says you need to plop down $360 for the Wii and extra goodies to get the "full experience." Where is that extra $160 coming from? Sadly, I don't see Wii Fit as the "full experience," as I've played it once, and I think a wolf spider has made it's home somewhere behind it. It goes for $100 for the game plus the board. An extra set of controllers - Wiimote and Nunchuck - is $60.

I'm sorry, but Wii Fit is hardly anything to argue about, and nobody needs Wii Fit to enjoy the Wii. Sure, Kinect does imitate the Balance Board by recognizing your leg movement, but have you played and enjoyed a game that recognizes leg movement? How many games are there that use the Balance Board right? Wii Fit is probably the only one that does, and the Balance Board isn't even a good piece of technology. Then there's the fact that a lot of the Wii's multiplayer games only require one Wii Remote. Bowling from Wii Sports is, by far, one of the more engrossing multiplayer games for the Wii, and you only need one Wii Remote for that. Go further, and there's even more games that don't need a Nunchuck; Nintendo would like devs to make games using only the Wii Remote. Metroid: Other M is a very deep game, and the game plays like a "high-tech NES game." That line comes from Team Ninja, not me.


Existing Owner
Again, another Wii Fit addition. And again, I don't see how it "adds" to the experience. If anything, it detracts, as it's a bad piece of equipment. And again, most multi-player games just need another Wii Remote. The worst part about an existing owners cost? Just $10 more than Kinect. Let's just get to the point.

Difference : -$100 (1-player and 2-player) : Wii Fit doesn't count. It's bad, and it's useless. Most of the Wii's games can fully incorporate you into the game with a Wii Remote, MotionPlus attachment and a Nunchuck. That's it. Even if you add Wii Fit back in, Nintendo is still cheaper than Kinect. By $50.

What do we learn here? Well, for the single end-user, we find that the respective system bundles are exactly what you need to start off on the motion gaming scene. $200, $300 and $400 for Nintendo, Microsoft and Sony, respectively, will get you started gaming for your house of choice. The added monies goes towards a multi-player environment, or for those fat-asses who think Wii Fit can help them curb their appetite of Oreo's and Ben & Jerry's.

For the existing, single owner (despite the irony in that statement), Microsoft costs the most at $150 (Kinect), followed by Sony at $100 (Sports Champion Bundle), then Nintendo at a tasty nothing. For multi-player, Microsoft is still $150, Sony is $150 (SCB + Motion Controller), and Nintendo is $40 (one Wiimote).

What can we ascertain from Microsoft? That they're inflating competitor's costs to make them seem the cheapest. Nintendo can be slightly debatable due to Wii Fit's inclusion, but even with it in the equation, it's comparable - and sometimes cheaper - than Kinect.

It's nothing more than Microsoft being biased. And who can blame them? They're 4 years behind Nintendo, and they've got stiff competition from Sony (who is treading on familiar ground with their Bingo hall-styled, Wiimote-familiar controllers, so the tech doesn't have to be taught to gamers). More over, they're taking the biggest risk by not having controllers with motion-sensing capabilities. Microsoft has the most to lose, and the most to prove.
at 3:49 PM