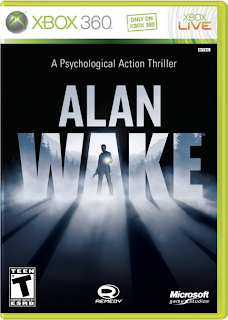 Something about Alan Wake was a bit perplexing. Since Remedy worked on this game - and they're responsible for the original Max Payne games, not the balding, fat sack-o-shit version we're getting in the third game - I had high expectations; you could say that I walked away from this considering it the spiritual Max Payne 3. Seeing as they finished MP2, took a small break them immediately started working on this, a bit of Max's soul seeped into Alan Wake. I don't know if that's a good thing or a bad thing. Yet.

Alan Wake is a deviation from what I'm used to playing lately, so it was a nice refresher. I finished up 3D Dot Game Heroes prior to indulging myself on this, so I may have been easily swayed. But, I have to say, I am a big Max Payne fan (I honestly felt the movie wasn't too terrible, but the Ludacris/Jim Brown fiasco was a bit ignorant, IMO), so I felt right at home with this game; it's been seven years since the painkiller-popping cop was in front of me (which, by the way Remedy, nice homage to your roots late in the game with the flashback). The "psychological" part of this game wasn't much of a psychological thing, considering that everything going on was real, effecting everyone and everything around Alan. He wasn't psychotic. He was screwed.

The story may be a bit backwards, unbelievable at parts, and absolutely bat-shit crazy, but it somehow works, and that's what surprised me the most. The gameplay is simplistic, yes, but it's very good. The whole flashlight concept was intriguing, but are batteries just thrown all over the place? Is Energizer the only brand the entire town buys? Don't get me wrong, Alan Wake utilizes the best product placement in a video game I've ever seen (non-obtrusive at all, well placed), but there is variety. My Wii remote has an Energizer and Duracell battery in it at the same time. I don't care what battery is in my controllers, but at the same time, I don't exclusively buy one brand. Actually, let me backtrack just a bit. There is one instance that product placement is done to the absolute worse; I felt used by the time I left, and I was still raw by the time I beat the game. I'm talking about that horrendous Verizon spot. This is the TV you watch during your escape from the insane asylum disguised as a "famous person getaway," and it's also tied into the "Boob Tube" Achievement. You reward us with a 5-point Achievement for watching an ad? Fuck you.

Gameplay The gameplay is great. The flashlight system, albeit a bit jarring, is interesting. You have to use the flashlight to disbar a darkness shield surrounding each enemy. Once the shield dissipates, you can take aim and fire at them with whatever gun you have. This system slows the game down a bit, which keeps the game from turning into a run-n-gun shooter, but it helps add to the creepyness. Instead of Random Woodsman A jumping out, scaring the piss out of you and firing a few shots into him, ending his existence, you actually have to wane him down using your flashlight, bobbing and weaving out of harms way, and once the shield is gone, you can take your shots. You don't have that instant gratification of killing the fool; you have to work at getting him back.

Surprisingly Intriguing Story Despite my initial skepticism about the game, I was somehow enthralled by it, and became interested in it. I'm not sure why, but now I want to watch all of those Bright Fall prologue live-action shorts and read that 144-page thing that came with the collector's edition.

All the Fucking Stephen King References Good god. So Alan Wake was inspired by Stephen King. We got that the first instance you mentioned him, which is 4 words into the opening dialogue at the beginning of the game. We get it. Shut the hell up about him. I'm sure he gets some kind of royalty each time someone even thinks about him, so I have to cut the man a check for $500 at the end of this review just for typing his name twice.

All This Drama Could Have Been Avoided Remember at the beginning when that old hag materialized out of the ether in the darkened hallway to hand you the key to your house? You were knocking on the bathroom door that Stucky was behind, trying to get his attention. Unless he passed out on the john from passing a massive mud baby through his system, there was no need for the entire story. If you were driving away from a diner on a small town road and a man suddenly jumped out the front door waving you down, I'm sure I'd see him, stop, get out, get the right key, and avoid going to a ghost island in the middle of a volcanic lake.

Those Goddamned Crows Fuck crows. And this ties into the first "HATE" bullet point. Just replaced "Stephen King" with "Alfred Hitchcock" and you've got a winner.

All the Hand-Holding Why in god's name is Alan telling himself what's going on? I understand "getting in the character's mind" deal, but I don't need to be told. I can see that the staircase is broken, and that I'll need to find another way around it. I don't need to be reminded that the gas station's lights are seen in the distance; whatever he sees, I see, and I'm not retarded. Stop it.

This game was good. I enjoyed it, and would probably play through it again to get the rest of the manuscripts in Nightmare mode. The game seemed to have it's own walkthrough in the form of Alan talking about what he sees every 50 feet, but if you ignore it, it seems to hold it's own. Despite a bit of Yahtzee coming out of me during the "HATED" section, I don't hate the game as much as he does, but I'm discouraging it. I would love to see where the DLC takes us, and the eventual sequel. But, until then, Alan Wake is the new Max Payne.