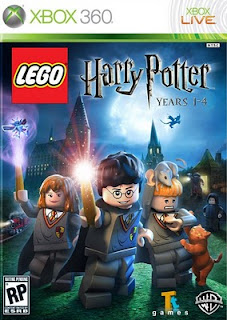 [NOTE: You'll have to forgive my ignorance on many of the names in the Harry Potter universe. Expecto Patronum is, pretty much, the only spell that I remember off of the the top of my head, and I can only remember a handful of the characters names. Forgive me, but I'm sure you can play a bit of Mad-Lib here and get it done.]

That was the first question that I asked myself when LEGO Harry Potter: Years 1-4 (LHP) was announced. Star Wars (LSW) was awesome. Indiana Jones (LIJ) was pushing it. Batman (LBM) was, well, bat-shit crazy. However, they all worked, and were respectable entries in their own franchise's game library. They took what worked in the universe, LEGO-fied it, and made it enjoyable by anyone. You could say LEGO games (by that, I mean of the aforementioned Star Wars/Indy/Batman games) are the Pixar movies of the gaming industry: 5 minutes in, and you love it, no matter what.

The reason this one works is that it harks back to the LEGO Star Wars games with the magic. Using Wingardium Leviosa (purple spell; 3-o'clock) is Harry's version of the Force, and it works even better than the Force. Rather than a pile of LEGO pieces turn into their desired form instantly, you watch them being whisked away into a tornado of awesome, while the pieces take their turn creating whatever it is they're supposed to be in the eye of the storm you've created. The Force is what makes this game magical, and it speaks to me in that it reminds me of the good LEGO games (both Indy games were for shit, and Batman was...well...).

This is, by far, the largest LEGO game to date. Hogwarts, while cluttered and confusing, is a much better hub than what was offered in LEGO Indy 1 and 2. I say "cluttered and confusing" because, well, there's no map to help you. By the end of the game, I still didn't know where a good chunk of rooms and locations were in Hogwarts. I had to use a map made by someone I found on the internet (scroll down a ways to see it, if you're interested). With more things to do, you would think there would be a massive check list. Of course not! What were you thinking? After 7 games, you would think Traveler's Tale (TT) would do something about this. Let's hope that they fix a lot of the problems that all of their LEGO games have succumbed to.

Harry Potter I'm not a huge fan. I'm not a big fan. I've read up to Goblet of Fire, and that was back in eighth grade (that was 10 years ago...holy shit). I have all 7 books (hardback, mind you), and I've read the first 80 pages or so in Order of the Phoenix. BUT, I do enjoy the universe, and while I was first surprised they chose to use Harry Potter as source material, it worked. Wonderfully.

So This Is Where LEGO Star Wars Went Yes, I know that LEGO Star Wars III is coming out at the end of the year. Yes, I'm sure it will suck, since it's based on the cartoon series of the Clone Wars on Cartoon Network. LHP is LSW in spirit. The "magic" element that was absent in LIJ and LBM has made a graceful return in LHP. The blocks whirl around more magnificently than they did in any of the LSW games, and the new targeting system makes telling the game exactly what you want to control that much better.

The New Targeting System OK, so it's glitchy. If you have your 360's controller presets in your [Profile] set to invert the Y-axis, then you're going to run into some serious trouble while using the targeting system; when you aim the cursor to the top of the screen, the camera pans down (simply disable this in the Dashboard to fix it). The targeting system does wonders at easing the pain that was trying to tell the game what you wanted to interact with, but there are still problems with it. Fix the problems in LHP2 (or LSW3), and you have a winner.

The LEGO Magic Different from Harry's magic, the LEGO games have their own magic, similar to the aforementioned Pixar movies, or walking into DisneyLand and feeling like a 5-year old high on candy. No matter the game, every one of the LEGO games have retained their series-defining luster, and it's more prevalent in this entry.

LEGO Game = Tons of Glitches This is something you shouldn't be surprised about. Every LEGO game since LSW1 has been plagued with countless glitches. I'm talking screen tearing, bad targeting, retarded AI (both enemy and friendly)...any LEGO game will have these issues. It's as if they tweak the engine every game and leave the bugs in there. Does TT not employ debuggers?

Butt-Fucking Retarded Friendly AI Sweet Baby Jesus. Never in any of the LEGO games have my "teammates" gone off in different directions, breathed down my neck so hard or performed a GoldenEye classsic: running in place at a wall. During levels where you have to switch between the two different AIs (Harry and Hermoine in an attic, Harry and Hagrid in the Forbidden Forest with Fang, one of the Bonus Levels), whenever I switched between characters, the one I just switched from starts running in the opposite direction, albeit for a few feet. In one of the Bonus Levels, I had Ron trying to jump up a ledge that was too tall to jump up, when I had just walked up a staircase inches to the left. Inches, I say!

Character Selection Why do I have to wait for the icon to flash to the appropriate one for you to choose? No thanks. Does it help that only half the screen is utilized for character icons? There is a lot more space left over, and they could have fleshed out the icons. Actually, you know what, I take that back. Just one version of each character is fine. I don't need 167 different characters. Why do I need over 10 different characters for one level? Why aren't the characters easily identifiable during the character selection screen? I had no idea that Viktor or Fang were "strong" characters that could pull on a chain. How in bloody hell is Fang a strong character? Sure, he's a Neapolitan Mastiff, and they're big dogs, but no where in the game did it let me know these characters had the "strong" set type. They could at least color-code the ring around the character icon to signify this, or better sort the characters, especially students from the 4 different houses. To further confuse those not "in the know" of Harry Potter, the names from the character icons have been removed when your flipping through your available selection for a certain level. Yea, like that's not going to confuse anyone...


The Glitches Oh dear god. Why is it that every LEGO game has to be riddled with glitches and bugs? I highly doubt they pick through their source code to kill bugs, because I'm sure they've been using the same engine since the franchise came to the current-gen systems and have yet to do Spring Cleaning in there.

LEGO Harry Potter is a welcomed addition to the LEGO franchise. The magic (not "magic" as in "The Force") of this game is something that has been absent for the Indiana Jones and Batman games. This is the first Harry Potter game to to it's franchise justice (I'm not sure if I'm liking the idea behind Hogwarts of War), and I'm sure that LEGO Harry Potter 2: Years 5-7 will come out in time for part 2 of the Deathly Hallows movie next summer. Hopefully by then, a map of Hogwarts will be implemented, a giant checklist is also implemented so you aren't aimlessly wandering around with the Indicator cheats enabled pointing you in every which way but the right way, and all those bug and glitches are taken care of.

LEGO Harry Potter: Years 1-4 was rented via GameFly and played to eternity, earning 100% in the game and all Achievements. Seriously, everything that you could possibly do in this game, I did. Don't believe me? Check out my GamerCard in the Author section and look at my Achievements. I do not lie.
at 1:47 PM