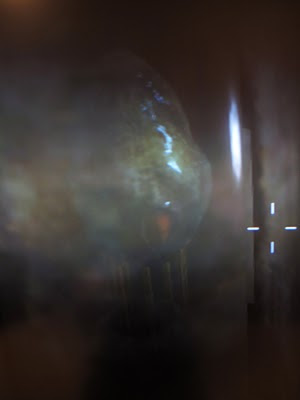 I'm thoroughly forcing myself to enjoy Singularity, and while perusing the achievement list, I notice one called, "Mother My Brain Hurts"

I can only imagine where this goes.

After obtaining the Dethex Launcher aboard the ship you "revive" out of the water, I notice a Weapon Tech through the glass panel of a door that I can't open, as well as a hole in the grating where I picked it up. I took note of the secondary fire of the gun, and I discovered I could control the ball, very similar to the Morph Ball from Metroid Prime.

This is where shit gets fun.

After entering the grate with the Morph Ball Controllable Explosive, I'm jumping up through the grating, as if I were playing Metroid for a hot second. I work my way through the grating, under the door, let go of [LT], which serves as the secondary fire purpose, and the door blows open. An ominous space track plays as I enter, which, to me, reminding me of the Space Frigate from Prime 1.

Anyways, I walk in, and I see a Chrono-Note up on the wall, a dead body on a couch curled up with a note. The Chrono-Note says, "Mother My Brain Hurts!". I filter out "Mother Brain" and the Metroid nerd in me is raging. However, nothing more screams Metroid than the note, plus the doo-dad I found after I read it.

Read past the break for the note.


We discovered the most interesting specimen today while on a routine dive. The creature is a unique predator, latching onto the head of it's prey for sustinance and reproduction. In fact, crew members that have been attacked by the creature exhibit strange behavior of curling up into the fetal position and roll around the deck. We will continue to study this creature.

The added emphasis is mine, not the game's. And no, I did not spell "sustenance" wrong; the game did.

To me, the initials "S.A." are for "Samus Aran," and the creature that I found in a stasis tube was pretty gnarly. While the photo of it is pretty bad - I don't have a capture card for my 360 - I can describe it to you. It is green in color, but not transparent or round like Metroids. It has a single, red oval in the center near the bottom, which looks to be it's eye. It has more of a Conehead shape, where it peaks at the top, but has more girth at the bottom. Rather than claws near the bottom, it has a series of long, reddish-orange tentacles hanging down.

The tube it's held in is cloudy, the room is poorly lit, and you don't have a flashlight (I thought we learned about that problem with Doom 3), but this is, nonetheless, one of the best, lengthiest references to Metroid - or any game, for that matter - that I've seen.

Bravo, Raven. Your game may not be all that hot, but you've got a knack for referencing your ideas and inspirations; if you didn't catch it, when you first obtain the TMD early on in the game, there is a side path just outside the vault (to your left as you exit the vault). There is, what is labeled, the TMD prototype, which is nothing more than a gun. Take a closer look at, and you'll notice it's modeled after Half-Life 2's Gravity Gun.
at 2:29 PM