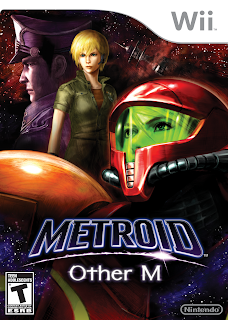 Metroid. It sits in the 'Top Five' of my favorite franchises. I'm a fairly recent fan of the series, starting with Metroid Prime six years ago, but I've done my research; Metroid II remains as the only game in the series I haven't beat. However - and here comes the turn-around - Metroid: Other M has quickly fallen to the bottom of the pile for the series, nestled right above the aforementioned unfinished title.

When Nintendo announced Team Ninja's involvement in a two-and-a-half dimension Metroid game, I was as giddy as Penny Arcade. My eyes became as wide as your favorite anime character, rainbows spurt out from every corner, and I was as ecstatic as a 9-year old girl who just hugged Justin Beiber. Yea, it was like that.

Seeing as they referred to it as a "high-tech NES game," I had some mixed feelings. Only being able to use the Wiimote sideways had me very skeptical, as I felt that could be used as an alternate, "casual" gameplay mode, and using the Classic Controller would invoke a more traditional, Super Metroid experience. It's hard to do Metroid wrong, as the past 6 years, we had the Prime sub-series, Zero Mission and Fusion (which, to be honest, I didn't like all that much). Team Ninja knows what they doing, as Ninja Gaiden is an amazing series. What could go wrong?


Trying to give Metroid a thick storyline in the course of one game is a big no-no. Metroid is about seclusion. Not some whiny ass bitch who can't keep her mouth shut. That's what I loved about Samus; she never talked. It's like Taylor Swift. She's great to look at, but only as long as I can put her on mute. And the story isn't the only problem. The overall gameplay, especially the item acquisition - especially the item acquisition - have serious faults. Everything that Team Ninja tried to do, failed miserably. I know they tried to give us a more traditional Metroid experience, but in doing the franchise justice, they effectively made the wait longer.


LOVED
Old-School Weapons When's the last time you got the Space Jump or the Speed Booster in a Metroid game? Exactly. Shinespark? Hell yes.
Steps Towards a Traditional Metroid Don't get me wrong, I loved Metroid Prime. I wasn't crazy about Echoes, and Corruption definitely could have used some work, but I enjoyed them. Far more than this game. The rumors of Metroid Dread have been around for ages, and it does exist; Nintendo has said so. But Other M is far from what we've been clamoring for. Super Metroid was the last, new, traditional Metroid we got. That was sixteen years ago. 16! And don't even bring up Fusion; a story driven, objective oriented Metroid game is not traditional.
The Concept I'm flattered by the attempt Team Ninja made. They wanted to give us something we've been demanding for for over a decade.
The Epilogue A sort of "homage" to Zero Mission, you head back to the Bottle Ship after the final boss (with good reason), allowing you to venture all throughout the ship to collect the remaining items. There is also a final boss, preceded by a bit of a boss rush hallway. The end boss is not new, but someone who kicked your ass over and over again in a previous game. Google it if you want to know (or just beat the game and find out), but I dare not spoil the fun.
HATED
The Story This is not Samus. This story, taking place after Super Metroid - which the only reason I can think as to why it takes place after said game is so they can enhance the ending of the game and give us that bomb-ass CGI movie of Mother Brain killing the baby Metroid, purely to invoke feelings of nostalgia prior to the game's release - is not what Metroid games are about. You're supposed to be by yourself. This story could have worked much better if it was a prequel to Zero Mission: "Samus, in direct command of Adam and the GF, is stripped of her abilities on a routine distress call investigation during her initial training for the GF, and periodically, Adam gives authorization to Samus to use a new ability when he sees fit", not "Having done this countless of times, Samus has too much respect for Adam and turns off everything she acquired in Super Metroid and waits for Adam to say when she can use them." I believe the increasing involvement of the Galactic Federation in the Prime series influenced Team Ninja, thinking that "if Retro got away with it, maybe we can." No. No you can't.
Samus I can't believe I'm listing this under the "hated" section, but I hated Samus' character in this game. She, as I said before, has become a whiny bitch. Since when does a bounty hunter listen to a former CO that you haven't served under for years? That's what I thought.
Item Acquisition Coming off of the previous point, why in the fuck is item acquisition based off of Adam's orders? Because she has too much respect for him? HA! I know the canonical relationship between the two, but that shouldn't hinder gameplay. Why does the Varia Suit come into play only halfway through the Pyrosphere? Why can't I use the Gravity Suit's ability during the battle with Nightmare (which, as your instincts are correct, this is the same boss you fight in Fusion to get the Gravity Suit)? When Anthony uses the Plasma rifle on the giant purple lizard, why can't Samus use hers? Being told when you can use an item is just as bad as Fusion being given certain weapons at certain points via Data Rooms. Fuck this.
Some Weapons Aren't As Old-School As You Would Want Them The Gravity Suit isn't a purple aura around the Varia Suit. Where did the Diffusion Beam come from? What happened to the Spazer Beam? If you are to believe you have your weapons and items from Super Metroid, then there are some things that are out of whack.
The Controls Using the Wiimote sideways, limiting yourself to the D-Pad for 3D exploration, the A, 1 and 2 buttons, with the game automatically switching between your current Beam, Missile, Super Missile and Grapple Beam when in First-Person Mode qualifies as the Casual control type. There should have been a Classic Controller option, where the controls mimicked Super Metroid's, giving you the option to use Missiles whenever you want to.

Spotchy Difficulty Yes, a difficult, 2D adventure game. It's something we all want. But the difficulty in this game is absurd. At one point, you're just cruising through the ship, doing your thang, killing a few Shriekbats or what have you, then the next minute, you're on an elevator with waves of Mecha Space Pirates, followed up by the Husk Beetle, or whatever the fuck it's called. There are spots of insanely difficult areas, with incredibly easy ones interlaced. You unlock "Hard Mode" for a reason, to be subjected to this. If this is what Normal is, godforbid what they put in on Hard.
If this were a job interview, and Nintendo hired Team Ninja due to their performance with Ninja Gaiden, and they gave them this, I see Other M falling under "hiring under false pretenses," and not to let them touch the Metroid license - or any of their current licenses - again. Capcom gave Nintendo the Oracle series of Zelda games. Retro cranked out the Prime series. You were 2 for 2; a 100% success rate of third-party developers making great titles for your first-party franchises. I'm pretty sure Gunpei would be slapping someone around, because this game is an insult to the franchise. I don't know what you guys were thinking, but tell Intelligent Systems to get off their ass and do something. Samus needs a saving grace. Stat.

Metroid: Other M was purchased from Best Buy for $15.74 (thank you, Reward Zone certificates), earning 100% item collection rate and defeated the epilogue boss, taking 9 hours and 32 minutes to complete. Nothing was spared.
at 12:00 PM