This is not a real review for Castlevania. It's more of a decry of the game itself:

Castlevania: Lords of Shadow is an awful fucking game.

For starters, there is nothing original about it. From the health/magic regeneration fountains (Dante's Inferno) to the quick-time sequences to take down a larger foe (God of War) to the giant Titans with weak spots scattered across their body that you must climb to (Shadow of the Colossus), there's too much borrowing from other games and not enough thought put into making something truly unique. The only thing that this game has in connection to it's roots are names; the name of the game itself and the protagonist, Gabriel Belmont. That's it. There is nothing Castlevania about this game.

Yes, I am aware that it is intended as a "reboot" of the franchise. To be honest, the franchise didn't need a reboot. It needed new thinking. Multiplayer-driven titles and 3D titles are not what the franchise needs. It needs a good, 2D romp through Lord Dracula's castle. The game borrows content from two prior games - Portrait of Ruin and Order of Ecclesia - in that the game is not one, huge land, but rather broken up into various, smaller places. There are 12 chapters, but you don't realize that they are chapters until you reach chapter 2, to which the "world map" is opened up for you to see.

I have only gotten to the point of the second Titan fight, and I couldn't do it anymore. The combat engine is severely broken (more on this later), health fountains are scattered few and far between, and the story is, by far, the most un-Castlevania thing about the game.

Earlier this year, Japan got No More Heroes: Heroes' Paradise, and HD-ification of the first No More Heroes game. Shortly after it was announced, Ubisoft came out saying they would not publish the title in the US, so a localization immediately stopped there.

Konami has come out of the woodwork and has officially announced Heroes' Paradise will be coming to the US, exclusively to the PS3 with Move support (hot damn). This has me very excited, as now, I can sell my Japanese copy, stop trying to play it, and hopefully, it will be better localized with better controls on the DualShock's side of the equation, with Terminex working with them to get rid of all the damned bugs.

No release date is set in stone as of yet, asides from the cryptic "2011". Maybe we'll see a release of it on the anniversary of the Japanese release date, which was April 15. One can only hope...

GameFAQs. I've never once saw eye-to-eye to these people. They've rejected an "in-depth guide" I submitted (differences between the GameCube and PS2 differences of Resident Evil 4, which I spent tedious hours on, detailing many, many differences between the two), they're forum members are douchebags and idiots (there can be one shining star every once in a while), and they've now rejected a valid glitch for Super Meat Boy, which I am now going to share to you, pulled straight from my Contributor Status page:

During the boss fight in Chapter 4: Hell, pause the game, go to [Switch Character], and the game will say you cannot. Press 'A' and you'll still be in the pause menu, however, the boss will still be going about his animations in the background, and you are invincible! After each attack, he will simply stay put, awaiting for you to un-pause the game. Simply exit out of the pause menu, pause again, and repeat the process above.

Note: After he completes each attack, all he'll do is sit there with that same shit-eating grin on his face. You'll have to back out to the game, pause again and redo the process.

Simple, right? You probably would never find this on your own - more by accident than actual determination to find a way around the fight - and is pretty valid, and straight to the point. Right?

GameFAQs admins kicked it back to me, rejecting it, saying, simply, "Not a Cheat". Here is a further explanation in the same rejection notice: 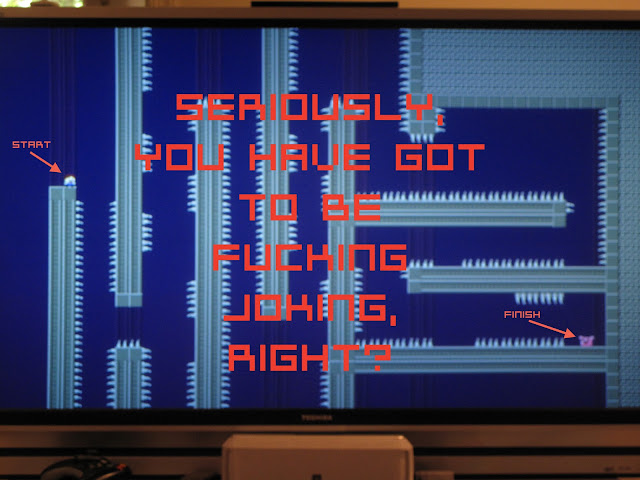 Who fucking does this?

As seen in Super Meat Boy, during a bonus "Warp Zone" stage.