What are they mining in Donkey Kong Country Returns?

if you talk to Cranky Kong every once in a while (presumably in the Mines area), he'll ask you something along the lines of "Just what are they mining down there?" I have a theory to this:

For those not in the know, Phazon is that nasty shit from the Metroid Prime subseries that corrupts whatever it touches (or just hurts like hell in Samus' case). Now, I haven't beaten the game, nor will I. The last boss is a huge pain the ass, it is unfuckingbelieveable how Retro actually managed to put the thing in there and said "Yep. This is good. Ship it!". So, I don't know what happens near the end.

I have a strong feeling that Retro is throwing an homage to itself and Metroid by having Phazon come out of the mines. Want proof? Look at some of the mine carts during levels that has DK riding them. Just what is that shiny blue shit in there? I'll give you one guess...
at 11:59 PM

I'm quickly approaching a year and a half running Destroyed Controller, yet I have no banner/logo/favicon for it. I don't know shit about Photoshop, and I don't have the patience to learn the intricacies about it.

That's where you come in.

If you feel like you have the time and dedication to create the logo to be used for this blog, keep a few things in mind:

What's the Next Fad in Gaming?

I began writing this on November 12, 2009, and has been sitting in my drafts folder ever since. I have gone through to update particular information, or added in "editor notes" to certain areas.

"Borderlands, I adore you. You're Diablo for a generation raised on first person shooters."
- Dude Huge Cliff Bleszinski

This quote has been digging in the back of my mind for a while now, and it's got me thinking: if first-person shooters are the games that are raising this generation, and 2D side scrolling adventure games - we'll just call them "2D" for this piece - was the genre of the 90's, then what do we have to look forward in the next generation?

When I say "next-gen," I don't mean the Wii 2, or the PS4, or the Xbox 1080. The "2D" games pretty much were the only thing we were playing up until Counter Strike, and that was just the PC guys. FPS games didn't really hit home with the entire fucking world until Halo showed up at our door steps in 2001 as an Xbox launch title (yes, there was Doom and Wolfenstein, but I'm talking on a grander scale). Since then, it's been run-gun-shoot-lather-repeat. The most recent - and most sought after entry in the genre - game came out recently, Black Ops. Breaking records here and there - 5.6 million copies sold in 24 hours (earning Activision $360 million Diablo-III-funds) and surpassing the $1 billion dollar mark just six weeks after it's release, which translates into $23.8 million dollars a fucking day (or just under 400,000 copies a day) - Black Ops shat all over the competition. Master Chief is just an echo in Alex Mason's wake of destruction. Sure, it's got it's controversy (airport, much?), but it's a damned fine FPS.

There have been so many FPS games, ranging between third-person shooters, military squad based shooters, survival-horror shooters, futurisitic shooters, first-person adventure, really fucking terrible other worldly shooters...the list can go on and on. Yes, FPS isn't necessarily hindered to a first-person shooter. However, many people do not understand the difference between an FPS and a TPS, or a third person shooter. Hell, some people didn't even know a genre existed. They don't even understand why it's "first" and "third," mainly the reference to literature story structure, which is where it actually comes from. So I guess this generation could be summed up in a general "shooters" genre, but, Dude Huge used the more specific FPS moniker to draw attention away from his own, TPS series, Gears of War.

A little more snazzier than last year's, I'm going all out as I possibly can, as I have more time to do this than say the 3 days I worked on it last year.

As with last year, the same rules apply:

I'm introducing a handful of new categories, however:

Without further adieu, here are your DestructiCon GOTY 2010 winners:

Email ThisBlogThis!Share to TwitterShare to FacebookShare to Pinterest
Labels: awards, best of

UPDATE: Amazon has posted what appears to be a stand-in box art for the game, which simply uses the artwork available in the press kit, and is nothing more than the panoramic shot with the PS3 box art template thrown around it. Remember, Uncharted 2's box art was created using artwork that was released when the game was announced as well. Check it after the break.

Original Story: Oh yea. This is what I'm talking about. Sony, on their PlayStation.blog, just announced Uncharted 3: Drake's Deception, and that it will take place in the Arabian Deserts (along with a teaser video). Following the path of Indiana Jones, eh?

This time around, Naughty Dog "wanted to deal with the challenge of animating the fluid landscape", as to why they chose the desert setting. They're not just going with the desert to test their skills, oh ho ho ho, Drake & Co. will be searching for the "Atlantis of the Desert", or Iram (which has many different names). Sully will apparently be getting a bigger goddamned role, which has me gitty for more interlaced blasphemous deliciousness.

Naughty Dog will be on hand on Jimmy Fallon's late night show on Monday, December 13, to give a live demo of the game. Entertainment Weekly's December 17 issue will also feature "a ton of additional details on UNCHARTED 3 and the new art shown above in glorious, full color print."

The game doesn't have a projected release window, but judging by the other games (and seeing as it's announced at the tail end of this year), I'm assuming a Fall 2011 release date.

I will kill myself before the game comes out, the anticipation is that bad. In the meantime, check out a glorious artwork panoramic of Drake and another crashed plane.

According to a recent Tweet by Cliff Bleszinski, that's what we're all thinking now:

"Clay Carmine for exclusive 360 character in the new MK would be an AWESOME contrast to Kratos."

It would be an awesome contrast to Kratos. Imagine, Carmine from Gears of War beating the shit out of Scorpion, or vice versa.

"AWESOME contrast to Kratos"? Did I just read that right? Since when was Kratos confirmed as a playable character in Mortal Kombat? I did some digging, and apparently, it's the new hot rumor coming from the magazines, this time, Official PlayStation Magazine. There are no scans or images, but the rumor is Kratos is the PS3-exclusive character, similar to how Soul Calibur 2 was handled so many years ago, where Sony pretty much was shitted on, considering they got Heihachi from Tekken ("Hey, let's put a fisti-cuffs guy in a weapons-based fighter! Here here, Joe Bob!").

What Happened to "Bringing it Home"? 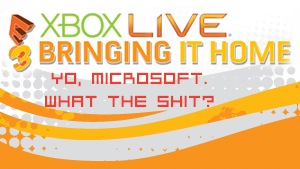 So, we all remember Bringing it Home, right? Microsoft's way of bringing the big name events to your home, via Xbox LIVE (read: PFM) and you just gobble up the freebies. E3, TGS, Comic-Con...it was all there.

Then, all of the sudden, it disappeared.

It would bring up a ton of content from aforementioned conventions: themes, GamerPics, demos and premium content (oh, the demos). Hell, this is how gamers got their first taste of Too Human, back in 2008 during E3's BIH event that year.

I've contacted Microsoft to get an answer. I'll update once they do.