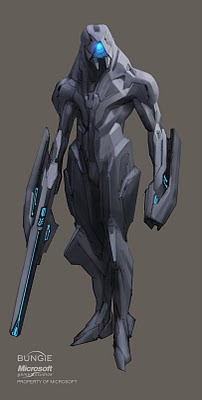 Are you a Halo fan? Wondered how the Forerunners actually looked? Well, imagine no more, as Bungie artist Isaac Hannaford has updated his personal blog with some very nice concept art, ranging from ODST up until Reach, with some Waypoint-reference material making it's debut, including a Forerunner's combat suit.

Now, this isn't a Forerunner, but a "Forerunner related experiment...regarding the combat suits referred to in the Waypoint data access points." It's worth mentioning this, as two things arise:

Take heed, as Forerunners have actually never been seen, with the exception of a few pieces of art showing Forerunners in various suits; we have yet to see what a Forerunner actually looks like. We've also never seen a Forerunner in a full-frontal pose with this much detail.

[Via Bungie via Isaac Hanaford's personal blog]
at 10:45 PM