I just bought, played and finished Assassin's Creed: Brotherhood's The Da Vinci Disappearance DLC today, and I've got a few thoughts on the ending, as well as the inevitable Assassin's Creed III. 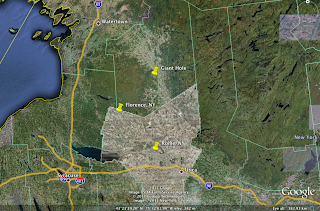 First off, that series of coordinates we see at the end in the Pythagorean Temple: 43 39 19 N, 75 27 42 W. These little bastards land out in Turin, New York on a gigantic hole, something that appeared sometime after 1998. From what I can gather, this hole is where Napolean Bonaparte supposedly hid out (side note: he died in 1506, the same year that the Da Vinci Disappearance DLC takes place). [Ed. Note: Yikes! My dyslexia kicked in while I was writing this post originally, and I - sadly - wrote Christopher Columbus for some strange, bewildering reason; he did die in 1506. That last little bit never made it's way out of the post. Whoops.]

If you gander south-west and south from the giant hole, you'll see two towns named Florence and Rome. Once you map these out and draw distances, you'll notice they form a near perfect Pythagorean Triangle. Shit's getting crazy now.

The giant hole, like said above, is location somewhere in Turin, NY. Turin - or "Torino" to locals - is also another city in Italy. This hole is in the Bonaparte's Cave State Forest, where there are "historical connections" to Napolean, whom we all know lived between 1769 and 1821. This is exactly 300 years after the events of Ezio's timeline (born 1459 with the last known appearance in 1506; spanning 47 years). "300" holds key significance because Ezio's reign takes place about 300 years after Altaïr's in the 1100s during the Third Crusades.

I've said it before, and I'll say it again: we're going to be going to the French Revolution in AC3, and roughly 250 years after that will be current day history, with a game - possibly AC4 - that could very well focus primarily on Desmond fighting the Templars in the 21st century.