Within a week, we've seen a rumor turn into reality nearly instantly with Capcom unveiling Resident Evil: Revival Selections in Japan, with each game in that collection - Resident Evil 4 and Code: Veronica X - coming as downloadable titles to the US, later this year.

However, both games are being given the same treatment that Sony's many "HD Classics" series are receiving: updating textures, Achievements/Trophies, leaderboards, and just about everything else that this generation takes for granted, minus one thing in particular:

When Capcom first unveiled that Resident Evil was receiving a remake (quickly earning the nickname "REmake" or "REbirth", with the prefix "re-" being capitalized on purpose), in part of the "Capcom 5" deal they struck with Nintendo, fans were dumbfounded by the level of detail the remake received, and even some added bonuses as well. Considering the fixed camera angles, the background were pre-rendered - essentially Final Fantasy-level detail, but in-game, not in a cutscene - which allowed a much higher level of detail one could imagine in the previous generation. Capcom quickly followed this up with Resident Evil Ø, a prequel to the entire trilogy, taking place the night prior to the Spencer Estate with Jill and Chris. Minds weren't blown. They were blasted.

Later down the GameCube's life, Capcom announced they were bringing the rest of the Resident Evil franchise to the little lunch box, but when they denounced the games - Resident Evil 2, 3 and Code: Veronica X - would not be receiving the same treatment as REmake and REØ, fans were pissed. I was pissed. Everyone was pissed. Why would they just port the games over, rather than give fans - and those games - the treatment they deserved?

Resident Evil 4 took nearly 5 years to be fully developed, from the initial rumor back in 1999, to it's release in early 2004, going though - ironically - 4 different transitions; the first version became Devil May Cry (earning the nickname "Resident May Cry"), the second one was the "fog version", the third was the "hook man" version (where we get Mikami's famous "Don't pee your pants!" line) and the fourth was what we have today. With different versions of the game being scrapped and revised, the moral of the team was down, so asking Mikami to salvage some members to work on a remake of three past Resident Evil games would have been suicide, and Resident Evil 4 probably wouldn't have came out when it did. 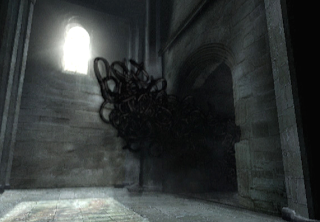 Looking back on Resident Evil 4's development, there are two scrapped Resident Evil games. What could be done with these versions? Well, don't fret for too long, as something did arise from them: Resident Evil 5. For those not thinking hard enough, remember back to the Uroboros creature from RE5, then think back to the fog monster from RE4's Fog version. See any similarities? It's not rare for developers to recycle elements from previous games, or scrapped games altogether, so seeing the fog monster reappear as Uroboros is warming in that they didn't give up entirely on the "scariest Resident Evil game yet".

With Resident Evil 4, Capcom revitalized the franchise into something a bit more mainstream, and key elements have been the mainstay of other games. Having the camera fixed behind the player, then zooming into the shoulder when aiming in, has been the number one thing that third-person action shooters have taken from the game. Revamping the inventory screen to an attaché case to where, as long as you have enough room, you can twist and spin items to fit to allow for more items (this was quickly removed in Resident Evil 5, because someone at Capcom doesn't want people to have fun; it was also the first game in the series to introduce real-time inventory management). It also brought us the Merchant, which allowed us to upgrade our weapons, which was pretty fucking awesome. All of these staples of Resident Evil 4 definitely helped bring the franchise back into the limelight. Sadly, there are detractors, which believe that, in taking these steps, Capcom has abandoned their "survival horror roots" of the franchise and has pushed the series into a streamlined action-shooter, not survival horror. I'll give them this, at least: Resident Evil no longer - prominently - features zombies.

By bringing Resident Evil 4 and Code: Veronica X to the the 360 and PS3, Capcom is really teetering on a fence: C:VX still uses the fixed camera angle, with just update textures/achievements and trophies, while RE4 has all those awesome features, with updated textures, as well as all those achieveables. Why even bother porting the former? Every port of the original games has been just that: a port. Resident Evil has not seen the love it deserves since REmake back on the 'Cube.

Capcom could have easily have taken RE4's engine, slapped character skins over Leon's wire frame for those five games, while still being able to recycle Leon's face for RE2 (with unavoidable tweaks for those of the other gender, of course), take the Ganados models, add zombie shambling movement with deteriorating faces rather than just pale and bleak, and put the camera behind the character. Each game, recycling elements from RE4, could have taken - by my best guess - 12 to 18 months of development time. With each successive release, more and more content created could be even further recycled; if going in chronological order, RE1 could be started near the end of REØ's development (using the outdoor settings, as well as elements from the facility Rebecca and Billy traverse through), while RE2 and RE3 could easily be completed side-by-side within that time frame, considering they both take place during the same night in Racoon City. At most, REØ-C:VX remakes could have taken 4-5 years to complete. Since we're on new hardware, we have new expectations, so this half-decade project has been pretty much shot out the window.

Capcom, here's to you: please, for the love of fuck, treat Resident Evil with respect. If you really want to sway gamers, take the entire back catalog of the franchise - this includes Ø, 1, 2, 3 and C:VX; you can leave Outbreak and Dead Aim in the trash where they belong - and give it the RE4 treatment. Unbolt the camera from the ceiling and put it behind our character. Give us Leon's attaché case and quick-access knife. Give us the Resident Evil games that we've wanted for the past 7 years. Remake the aforementioned four games in the franchise with the love and devotion you gave Resident Evil 4. Make it happen, Capcom.
at 6:02 PM