Here I am again, doing a series of reviews on various games that I just don't have the time (nor motivation) to review. As stated in the brief snippet, I'm starting in September with reviews. Wanna take a guess as to which game I'm starting with?

Halo Reach
Release Date: September 14
Platform: Xbox 360
We're at the sixth installment in the Halo universe (yes, I counted Halo Wars; fuck off), and it seems to have gotten better. Battles seem to be more intense, but it only seems that way with new enemy variants, new weapons and power-ups for your character in the form of the Load-Outs. However, whenever you move, there is what looks to be motion blur, but I have no idea if this is intentional or not; it actually seems like a drawback. However, I'm not here for the gameplay (sadly, I'm actually saying that). I'm here for the story.
Yes, I'm one of the few people drawn towards Halo for it's story. I'm absolutely intrigued by the Forerunner lore and possible connections between Halo and Marathon (I'm a believer). The game has gotten better over the years, but once you pull away the sheen, it's just another shooter with powerful people and butt-fucking retarded AI; Katt, can you please not drive like a fucking retard?
LOVED
Story Gotta love it, but it doesn't necessarily open up any new revelations between the Covenant and Humans, but it does give an idea what it was like when Humans made first contact with them.
HATED
Load-Outs Sprinting is something that you should have from the get-go, and how the fuck can a Spartan only sprint for 5 seconds before becoming winded? You're a goddamned super soldier!
Grade: B+

We all love zombies, amirite? Over the past 5 years, we've seen a healthy slew of zombies in our games, music* and movies. Dead Rising took an almost arcade-y approach to it, with you jumping through hordes upon hordes of these little bastards, snapping pictures for your editorial.

Dead Rising 2 built upon that, removed photo taking, but replaced it with a do-it-yourself approach to making your own weapons. An oar with chainsaws attached? How about a automatron teddy bear with a machine gun duct-taped to it? Wheelchair bound? Fuck it! Strap some machine guns to it and go to town. DR2 really did make the experience a hell of a lot better to enjoy (with a slightly improved save system), but Capcom, what the fuck is it with the controls? Not every game needs tank controls. Get your shit together.

LOVED
Build-Your-Own Combos Making your own weapons was a great addition, despite being limited to only a few weapons (hell, Alone in the Dark allowed for more customization options). Enhance this in the sequel, and you've got a winner.


HATED
Controls Every goddamned time Capcom puts out a third-person action game (save for Devil May Cry), the controls are butt-fucking retarded. It's like some guy was eating dickcheese and got high off of the fumes, which left him permantly brain dead, to which Capcom thinks having a real-life zombie around would promote morale. Stop doing it.
*If you're into heavy-metal/metalcore and you haven't heard of them yet, go check out The Devil Wears Prada's Zombie EP. It's a 5-song concept album about zombies. Fucking sick. 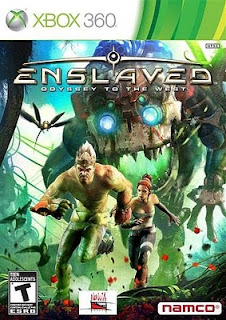 When I first heard that Ninja Theory was making a new game, I was ecstatic. When I heard it wasn't Heavenly Sword 2, I was pissed. Gratefully, Enslaved helped subdue those worries, as it is actually a fairly decent game.
Sure, it's not the super-awesome game it was hyped to be, but it came off to be a solid experience. The story is what pulled my interest towards it, as it is a retelling of Journey to the West, which is what Dragon Ball is loosely based off of. You are Monkey. You have an extendable staff. You have the Cloud. You fight robotic bitches. You travel Westward away from New York City, in which the ship you were held prisoner on crashes into it. There are some similarities between Enslaved and Dragon Ball (Capsule Corp. references, anyone?), but Monkey isn't the badass that Goku was. And your annoying-as-all-hell counterpart Trip (Bulma, essentially) is exactly that. Why do you need a headband on me that will kill me if I don't do as you say? Oh that's right. Because you're a bitch.


LOVED
Exploration The mechanics here aren't that bad. They're solid, but they're no Uncharted. Watching Monkey live up to his name by writhing around like a monkey was a treat, as was the sash that represented the tail was a few homages to source materials and influences.
HATED
The Ending That's it? That's how we're going out on this? Judging by sales, I'm sure as shit we won't see an Enslaved 2. Next thing up is the Devil May Cry reboot. I hope to god they don't screw that up.

I'm a Castlevania fan. I really am. But I'm a fan of the traditional (by today's standards) Castlevania games. Symphony, Circle, Harmony, both Aria's...these games are what I believe define a proper Castlevania experience. Sadly, Lords of Shadow - being a Kojima production - doesn't live up to that. The former 3D entries in the series - Lament of Innocence and Curse of Darkness - were absolutely horrendous.
I did not enjoy one single bit of this game. Between the combat, where your attacks simply don't have any effect on any of the enemies, to the fucking terrible camera angles during boss fights (we'll include boss fights in general while I'm at it), the newest game is just fucking terrible. This is not Castlevania. Nor is Harmony of Despair. Get your shit together and give us a traditional Castlevania experience. Want an idea? Remake Symphony, change the layout around, keep the experience system and weapon system in-tact, introduce a new character, alter the story to reflect these changes and slap a new name on it; essentially, use Symphony as a template. How badly can you fuck that up?


LOVED
Kojima's Involvement Seeing as the past several games in the series weren't all that hot - and including the 3D games in the series, too - Konami decides to bring in Kojima to find out just what in holy hell is going wrong. Well, he couldn't see what was wrong, as this game is horrible. I'll give them this, though: Lords of Shadow is much better than Lament and Curse, and that's a big step up.


HATED
The Second Castlevania Game to Bomb. Within a Year Konami released two - count 'em - two games in the series within a year. Hell, they were two months apart (see a theme, here?). Harmony of Despair was a multiplayer romp in the vein of Portrait of Ruin/Order of Ecclesia, and that game was horrible. My hopes were so high-up for both of these games, and Konami just shit all over it.


Next week, I'll be taking a look at a certain blue rodent's revival, a fucking god-awful, current-day military experience that, apparently, had help from soldiers, a fan-fucking-tastic futuristic military experience that had no help from soldiers, and the third entry in, what many call, a simplistic RPG series that could take minutes to beat with a story as deep as a dried-up puddle of water.
at 5:39 PM