Again, again, more reviews. This time, we've got a few sequels, a collection of games and zombies. Lots and lots of zombies. Let's do this. 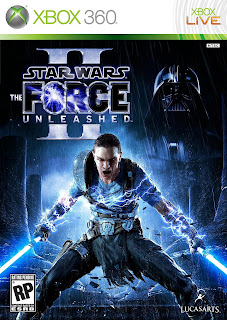 Star Wars games have never really held a special place in my heart. Hell, I was skeptical of the first TFU game, which said skepticism was quickly thrown out the door when I played it. Between the announcement of the sequel to the very first batch of reviews, my hopes were held high. After the reviews started to come out, those opes were quickly dashed away and brought crashing back down to earth. When I finally was able to play the damned thing, the crater became less of a wound and more of a memorial site.

TFU2 - or, as my 12 year old brother calls it, "FU2"; HA! - is a fun game to play. You are much more powerful, and the enhancements to the GUI are much welcomed (at least, in the menus). You feel much more like a badass, yet, sadly, that feeling only lasts throughout an afternoon. My overall gameplay time with the game was roughly around 5 hours. The last time I only spent part of a day playing - and beating - was Halo 2, Christmas morning so many moons ago. The game has some improvements over the other, but seeing as there won't be a sequel to this, the only saving grace this franchise has is playing the original.


LOVED
You Really Are a Jedi Badass Sure, Starkiller's name reaps of maiming and destruction, but the power that oozes from him in this game is overpowering. So overpowering, in fact, that it feels like the game is on a constant "God Mode".
HATED
Wasting a Weekend? More Like an Afternoon As above, the game is incredibly short. With the few instances of cameos and travel destinations that are only included to make the fans happy (Dagobah? Really?). To make the game longer, the story could have been altered to where Vader is on the brink of pissing his pants due to his anger, he could easily jump in another TIE fighter and chase after his ass, allowing Starkiller to hide away on several planets; Vader could have been TFU2's version of RE3's Nemesis.
Grade: C- 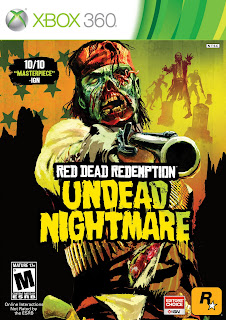 Red Dead Redemption: Undead Nightmare
Release Date: October 26 / November 23
Platform: XBLM / Xbox 360
Red Dead Redemption was something new for me. I'm not a fan of the wild west era, nor it's inspired games. But last year, I had a wild hair up my ass to play RDR (via GameFly). Yes, I drew comparisons to GTA IV - because, let's be honest, it's basically GTA in the wild west - but the world and the characters we were treated to was an absolute blast.
Undead Nightmare basically turns all of that on it's head. Who says that's a bad thing? Intertwining zombies into any game pretty much makes it better. And not just zombies, but all the extras included were pretty snazzy, too. Sasquatches and the Four Horses of the Apocalypse? Fuck. Ing. Right. Nothing has changed since RDR, with the exception of the included undead. The story - yes, I'm complaining about the story - was a bit strange; I was expecting this to be exactly that, a nightmare, where John went to sleep, dreamt about the zombies, then woke up. But, to allow us to play the game after it ended, you are treated to Zombie John, whose steed becomes Death, who's secret ability is making any zombie's head that you come into contact with explode.
LOVED
Zombies Makes Anything Better With the addition of zombies, we're treated to another perspective of the wild west, which has never really seen the flavor of zombies that I'm aware of.
HATED
Nothing, Really I couldn't find a major complaint with the game. Seriously, nothing at all.
Grade: B+

For this interquel, we get to see how Kratos reigned as God between the first two games on the PS2. This time, however, the upgrades in the game from the original PSP game - Chains of Olympus - have pushed the realm of portable gaming, as we thought Chains was the best you could get. Alas, Ghost of Sparta shows that there is breathing room, and yes, you can have a fully fledged Kratos experience on a handheld.

Sadly, I do feel they are stretching the story of Kratos too much, as we have 5 games under the God of War franchise, with a presumed sixth on the way (God of War IV, as the teaser at the end of GOW III shows a blood trail from where Kratos was supposedly killed leading to the cliff edge with no body to be seen, could be about where he goes from there, with the inclusion of his brother). The story should have been as simple as one, two, three, but it's actually zero, one, one-and-a-half, two and three.


LOVED
Better Than The Original The steps forward that were taken from Chains to Ghost were much welcomed. The PSP outings of Kratos are showing how powerful the games can be on handhelds. Notice I said "handhelds", not "the PSP".
HATED
Sorry, It's Been a While This makes the second game - in a row, no less - that I can't write down anything negative. Granted, I played this game 6 months ago, so it's hard to draw negativity when I only played through the game once.
Grade: A- 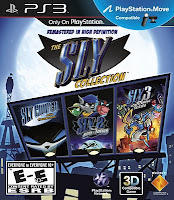 Here's the truth: I never played Sly. Never once, but when Infamous came out, people were saying that it was basically "Sly, but with real people".

I can fully support this claim, as Infamous is a spiritual successor to the entire Sly franchise.

The Sly games, in their "remaked" glory, are games that withstand the test of time. The gameplay is timeless; I never once grew bored with any of the games. Looking at the advancements of urban sprawling they made between Sly and Infamous, I can see where they can definitely improve upon with Sly 4. All three the games have charm, wit, humor and, above all, playability; these games are the epitome of fun.


LOVED
Classics Reborn Like said above, I never played any of the Sly games, but I regret the decision to never pick any of them up until now. They are absolutely amazing games.
HATED
The Sly 4 Teaser I have to wait until the next one? If there's not an announcement at E3 this year, color me pissed.
Grade: A-

Next time, I'll be looking at yet another first person shooter within a well-established franchise, a revisit to Italy, romping through a jungle with an old friend, and putting an adventure through a castle on an infinite loop. I'll also throw in a hardware review (a first) for you guys. Enjoy.
at 10:28 PM