The Beginning of My Epic Tattoo Sleeves

Here I am, mere days away from gaining the balls to start my Epic Tattoo Sleeves. Going with the theme, it's going to be nothing but video game related; nothing else will touch these arms.

I have a couple different ideas, but the execution is the same: video game art. Here's the beginning of my thought process:


Idea 1 is what started the idea off, Idea 2 quickly followed, but Idea 3 is an amalgamation of Idea 2 and a separate, unlisted idea I had.

I eventually decided to scrap all of the above, and decided for something a bit different: warm colors on the left, whereas cool colors on the right. I would pick-and-choose elements of respective colors and work them together, and not just random shit left and right. The inspiration came from this little gem I concocted a few years ago that would begin this journey: 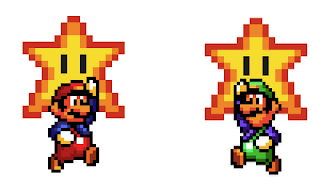 I found sprite sheets from Super Mario Bros. 3 for Mario and Luigi, and found this Starman somewhere on the internet; the idea was a take off of the nautical stars that kids today have such a fascination with, with Mario on the back of my left arm, Luigi on the back of my right. Due to the complexity of the tattoo - being strictly pixel-art and no black outlines - the cost to the two artists I talked to would be significantly higher than a "standard" tattoo; I was quoted $250-350 per piece (the higher price came from a guy who "hates Nintendo tattoos", according to the shop manager). I've got a few friends-through-friends that I'm trying to talk to to get pricing ideas, and hopefully they're comfortable with the precision I'm wanting.

Check past the break for the other elements I'm wanting to work with. Keep in mind, I'm still working with everything, so I may drop or add something (anything with the asterisk means it's questionable if I'll include it). I'll update next when I get a solid image of the rest of the elements in a cohesive design, or if I start getting them actually tattooed.