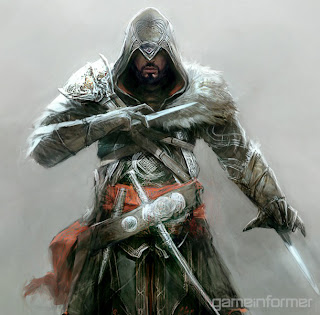 So I'm doing absolutely nothing productive on Facebook, and the Assassin's Creed page updates with a link to a Game Informer article talking about new characters from Revelations. They do a recap on both Ezio and Altaïr, reminding us that Desmond will not be controlling Altaïr directly, but, Ezio will be finding things that he can use to "look back and experience" what Altaïr did at that location, solving puzzles or gathering info. Looking back on my comments on Joystiq's, ahem, revelation of the game to the public, I pretty much hit the fucking nail on the head (you only need to scroll down a bit to find my comments):


"I'm hoping that, since Ezio is confirmed to be in Constantinople in the 1500's, both Altaïr and Desmond will be there as well.

Imagine that, as Desmond, you're in a desolate, nearly destroyed building that houses an artifact (Codex page, perhaps?) that was placed there before Ezio's time, but after Altaïr; you can't make hide-nor-head of what goes where in the building. Ezio's version of the puzzle has the building in near-perfect condition, but a runic puzzle to access the artifact has been vandalized, possibly by the Templars who couldn't solve it. Go back as Altaïr, find the runes and make note of them, come back as Ezio, solve the puzzle, locate the artiact, add it to the collection, and Desmond has his information.

It's like a dual-world idea without the terrible dark/light aspect, just "old" and "older" versions of the same place.

THAT would be pretty effing awesome."

Now, one spectator (a fellow by the name of MDizzy) came back, alluding my hopes and dreams to Ocarina of Time, with "Link swap[ing] between Adult Link and Kid Link." He was correct, but I had to correct him on one crucial detail:

"Precisely, but with the added third layer, and a much grander scale. Sadly, there would be key differences:

In Ocarina, playing as Child Link would alter the landscape for Adult Link to solve puzzles (Spirit Temple, for one).

One commenter said I "hit the nail on the head" (hardy har har), while another said it reminded him "of the time travel mechanic of Prince of Persia: Warrior Within. I like it!" I like it, too, TotalTortilla.

Regardless, the kicker to GI's story is the introduction of a new Assassin, Yusuf Tazim. He is the master assassin of Constantinople, much how Ezio was for Rome. Despite Ezio outranking Yusuf as Grand Master of the Assassin's Order, they become buddies, and Yusuf teaches Ezio how to use the Hook Blade, the new item Ezio uses in his climbing/fighting escapades.

My interpretation of this is that co-op could very well be hidden in this message. Imagine that once Yusuf shows his face, campaign co-op is unlocked, and you and a friend can romp around Constantinople as two master assassin's, doing co-op shit; fighting, climbing, scouring, scavenging...it could all be there. Imagine, if you will, that Revelations could be to co-op as Brotherhood was to online multiplayer.

Take from it what you will, but I truly think campaign co-op will be a new feature, if Ubisoft - and only if - can do it right. Knowing them, I'm hopeful they can.