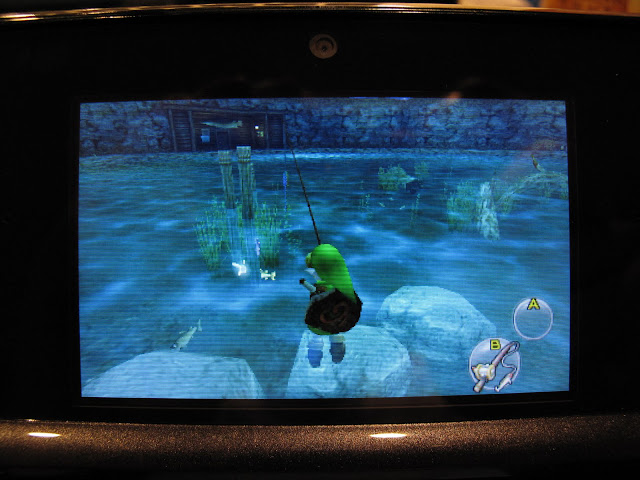 It's no surprise that Ocarina of Time for the 3DS is what a lot of people go out and buy the system for. Hell, it's why I dropped the cash credit for it.

Seeing as I'm pretty much retracing my steps in the game as I did in every playthrough of the original, I'm at Lake Hylia after I snatched up Ruto's Letter in a Bottle, and I ventured into the fishing pond.

First off, let me say that that fishing pond has received the most work as of yet in the game in terms of graphical overhaul; it's no longer a circle, but more of a "random" assortment of zigs and zags in the wall, and it has less sand and more rock.

Regardless, I tried the most common spots for the sinking lure here: the perimeter of the pond (the grass reeds that line the place are gone), as well as on top of that log we all stand on to fish. Well, I had no luck.

It wasn't until I randomly backflipped onto a rock near the wooden poles (pictured) that I got it. I don't remember the sinking lure here at all, so I'm thinking it's a new place. I actually backflipped over the rock to Link's left and landed on the center one, so it could be sitting on the one on the left, it could be on the center one. Who knows. Try it. Let me know.
at 7:29 PM