Another entry into the long-standing fashion of reviewing games in a gigantic pile. Screw the formalities, just hit the break for some reviews. 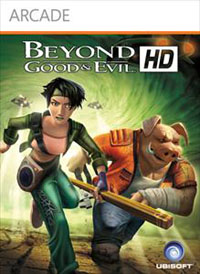 
Here's the thing: I never played Beyond Good & Evil. Well, I take that back a bit; I played a demo of it at Sam's Club when I was younger, remembering crawling through a vent and using the camera a bit. That's it, and it wasn't enough to hold my interest, especially when I heard - as a teenager - that this game was a "Zelda-killer".

When I heard that Ubisoft was "remastering" this game, I felt like it was a great way for me get up on it. Hell, I even bought the damned game on the GameCube a few months before the announcement, but never got around to playing it, so playing it with enhanced resolution (seeing as I could only get 480p on my 50" TV would strain the experience) and the aspect of Achieveables was nice, too.

The game itself is fun. The gameplay, for the most part, does hold up to today's standards, being an 8 year old game. The controls are fairly solid, and the story, billed as "unraveling a government conspiracy", wasn't that bad. Sadly, walking into an 8 year old game - while never playing it - does take me aback. I tried to put myself in the shoes of my 16 year old former self, and I know I would love it. I do know, however, that I can't wait for the sequel.

LOVED
Classic Gameplay at Heart This is the kind of gameplay I like. Different temples/dungeons/lairs to explore, find new abilities, test the ones you've acquired, and hone the ones you have in your arsenal.

HATED
Can't Fully Appreciate The Game As said above, I never played the game back in it's heyday, so walking into this game 8 years later pretty much sucks, but it does open me up for the sequel, which I'm really looking forward to. 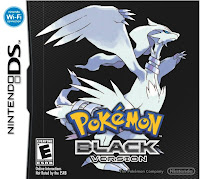 
I was in middle school when I first experienced Pokemon; you could say I was the equivalent of Kyle from South Park in my school, as I was the last one in my group to get on the bandwagon. I got Pokemon Red and the see-thru purple GameBoy Color for my birthday back in 1998, and I was instantly hooked. I had the GameShark, I was hacking the shit out of Pokemon, but not before enjoying the game. I was so enthralled that I imported Gold before it came to the States, giving my parents the excuse of "it'll help me learn Japanese".


I haven't owned a Pokemon game since the English Gold release, and hearing that you are locked out of the old Pokemon in favor of the new ones in this game, effectively putting everyone on the same page, really spoke to me. As I heard that, my wallet began to scream at me, yelling obscenities I, myself, have never uttered, and I have one of the worst mouths you can think of (I have been told I remind people of Randal Graves from Clerks, so let your imagination run on that one).


Picking up Black, I brought me back to my childhood of exploring a new world and finding new creatures I've never seen before. I had to learn the new technicalities of the series that have evolved since Gold, such as new TMs and HMs, double battles, new inventory management, and overall attacks that effect status ailments and their cures, plus the new Pokemon types.

I do have one big gripe, and that's the large difficulty ramp you see at the electric-type gym leader. How in fuck's sake am I suppoed to beat this bitch who keep uses Volt Switch on me with that flying Pikachu? Is this legal? How can little children expect to get past this gym leader? She's like number 3 or 4, and I don't remember having this much trouble - no where near this much frustration - during Lt. Surge or Erika from Pokemon Red; Raichu was a little bitch, and if you were able to pick up Charmander at the beginning or, by chance, was able to snatch up an Abra and work with him, Erika would've been a pushover. But, of course, those little flying squirrels have to be electric AND flying, so that Boldore you've been leveling up can't do shit, forcing you to back out, find that crocodile pokemon and level his ass up just to take down a Pikachu with wings. Fuck that gym.


LOVED
Childhood, Reimagined I actually had fun with Pokemon; it's the RPG in-between Final Fantasy for me. The whole "you can only use new Pokemon until you've beaten the game" definitely struck a cord with me.
HATED
That Electric Bitch See the last paragraph of the review.


When I first heard about Assassin's Creed DLC, I thought Ubisoft may screw us over like they did with the DLC for AC2. Alas, they do not disappoint.

I felt the DLC this time around had much more gusto behind it, giving much more breadth to the story than the actual game did. Yes, as I said in my review two parts ago, Brotherhood's story sucked. There was more here than in the actual game. How does this happen? As a possibility that this bit of DLC was intended to be in the game, as the revelation (heh) at the end with Desmond stabbing Lucy had nothing behind it, but with Da Vinci Disappearance, you have the coordinates at the end which really fuck with your mind.


LOVED
Better than Sequence 12 and 13 This is probably the best bit of DLC the series has had yet.
HATED
This Could Have - Easily - Been in the Game There was enough here to be DLC, sure, but it should have been in the game, as this holds more in the story than the game it's made for does.


When I first discovered this game was a Diablo clone, I was intrigued. I started playing it, and it felt great, almost as if Gameloft made this*. Then I discovered that the Schaefer Bros. (Max and Erich) worked on this game, who were co-designers for Diablo I and II, and I was taken aback.

The game itself looks fantastic. The controls are very fluid. The gameplay harkens a particular chord with me. Perhaps because I haven't played Diablo II in years, so playing a very well craft dungeon crawler is easy to please this particular chap.


There is one little tiny thing I have a problem with this game, and that's your inventory management. Perhaps it's them distancing themselves from the grid layout of Diablo II or Resident Evil 4, and the easy silhouette placement of body parts to easily assign weapons and armor pieces, but a gigantic list of items is not for me. Of course, I've delt with worse, and I've come to terms with it, but Torchlight is exactly like Diablo 1: you're in Tristram and you delve deeper and deeper into the chasm below the town, eventually finding the greater evil plaguing your land. Is that a problem? No fucking way.


*Gameloft being a company who's sole purpose is to completely rip off other well-established franchises, copying the look, feel and gameplay, but never acquiring the soul.


LOVED
Diablo Clone at it's Finest Leave it to two ex-Blizzard members to craft a very good Diablo clone/dungeon crawler.


HATED
Inventory Management Fucking Sucks It does. Plain and simple. Please fix it for TL2.


Well, this update came along a bit smoother, albeit Firefox being a complete fucking dick and freezing up whenever Blogger wants to auto-save the draft.

Regardless, next week time I'll take a look at the second sequel to a LEGO game that put the entire franchise on the map, the sequel to the long-dead internet joke of seeing if your computer can handle it, another sequel to a betrothed first person puzzler game, and another entry into the LEGO franchise, but this one enters into uncharted waters.

See what I did there?