[ODDITIES] I Give up on Joystiq Commenters: how "personal" do you know me? 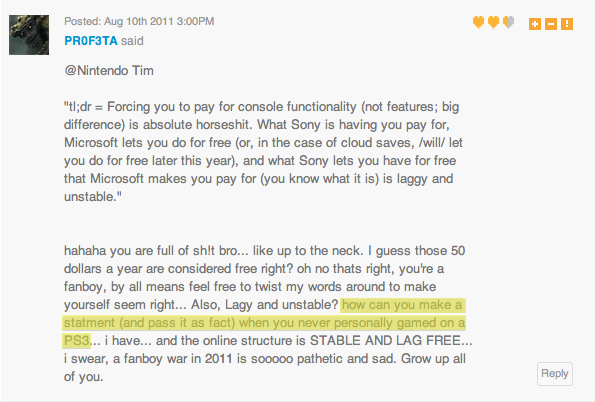 I've been biting my tongue on this issue for over a week (check out the timestamp on the comment), but remember my post about Sony's update to 3.7? Well, I linked to it in a Joystiq article on the same issue, and well, let's just say that the PS3 fans out there were camping out. Here's the meat and veg from that above comment, posted by "PR0F3TA" ("Hey, numbers-as-letters is still cool, right? They are? Dude, check out my new PSN handle."), or known as "PROPHETA" on the PSN:

"How can you make a statement (and pass it as fact) when you never personally gamed on a PS3?"

Yes, I'm ignoring the fact that he's called me a "fanboy" and he claims there's a "fanboy war" going on (that, and his lack of grammar; looks like somebody gave up on the ninth grade at the age of 17), but another claim I will stick to? The one where he asks me to "twist [his] words around to make [my]self seem right".

I'm going with "how can you make a statement (and pass it as fact) when you don't personally know me?" I never once gave you any indication that I don't own or have "gamed" on a PS3. Mind you: 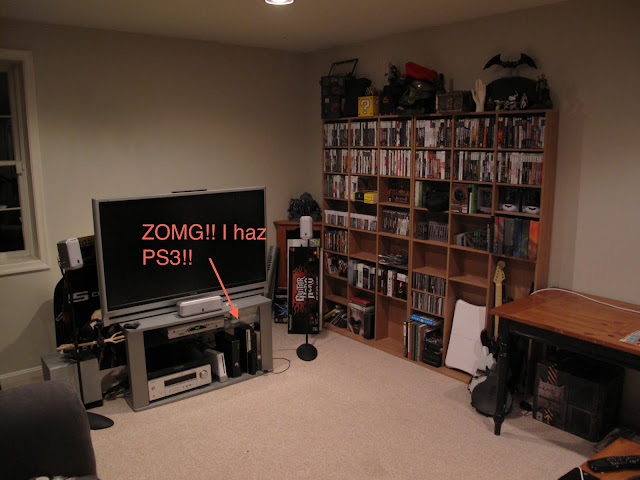 But, you know what? A picture wouldn't do, would it? I mean, he could think I have roommates, or siblings (which, the later I do, but he's 12; he has an Xbox), but since he personally knows me, he should already know this, amiright?

So, let's do the next best thing. Here's a gamer card with my PSN data:

Level 12, 8 Platinums and 631 Trophies. Considering I have less than 20 games (16 retail, to be exact, not counting the second copy of Uncharted 2, which I imported the special SteelBook edition from the UK), I have a 63% rate of completion (actually, thats much better than my rate for my 360, which is less than 50%).

Let's take a look at your profile, shall we?

You're at Level 8, 476 Trophies, with none of them being Platinum.

[HELP WANTED] What's the Best Fitness/Work-out Game for the Kinect? 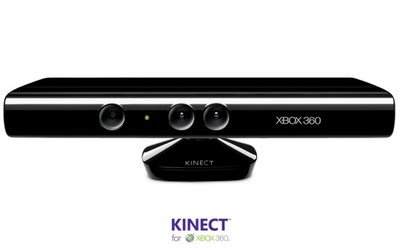 I just posted this on Kotaku's Speak-Up forum, and I figured I'd ask my (few) readers out there their opinion, as well:


I was thinking about getting a Kinect (seeing as I won't have to worry about excessive sweating getting into my Wii remotes, or Move controllers, if I owned them) for fitness games; I'm 6'2", fluctuating between 155 and 160, so obesity isn't a problem, it's just me wanting to get in some sort of physical shape (I've got that pudge starting to develop on my gut, so it's time to hack it off).

Cardio is a (relatively) cheap way for me to get into - and stay - in shape, and it's probably the "gateway drug" into actually maintaining a healthy lifestyle; if I'm not at work (I work retail, and we joke about lifting the boxes we do on a daily basis is small bit of strength training), I'm sitting at home, watching TV, drinking tea or water, munching on Goldfish until the next meal of the day hits. I've always seen "hitting the gym" as lifting weights, and strength training really doesn't seem to be my bag.

Out of the fitness games out there (UFC and Your Shape, primarily), which one of these actually holds true of being a "fitness" game? I know Ubisoft is launching YS2 later this year (and that Dance Central even has a workout mode, which I never knew, but I'd rather not buy a full game and only utilize one mode; I'm white, so I, naturally, come with no rhythm or swagger), but are either of these games even worth it? Should I wait for YS2?

From what I've read, Your Shape lacks variety, and from other games that I've already written off, Zumba's recognition sucks, and EA Sports Active 2 has some pretty bad glitches (giving you credit for doing moves when you aren't doing anything at all, signing you out if it can't recognize you, etc). I haven't heard too much about UFC Trainer (asides from it being a fucking ass kicker), but seeing as YS still has the highest Metacritic rating (73 over UFC's 69), they're almost the same in terms of ratings, but how do they stack up? Are fitness games even worth it at this point, or should we wait for developers to get better at them?

Version 3.7 will give players the ability to auto-upload save files for their games, auto-sync your Trophy data (finally), and auto-download new system updates so you're not powering on your system after a month not playing anything worthwhile, only to find out Sony has pushed out 14 "security updates", to which you have to wait 40 minutes for the update to download and 15 minutes to install, to which you've forgotten about the game you're wanting to play.

OH! I almost forgot the most important thing: all of this is exclusive to PlayStation Plus members. The service that gets you absolutely nothing except discounts on a ton of shit on the Store - with barely any of it being worth the bandwidth - and free shit that, again, is hardly worth it that will barely help you break even on the price of the subscription service. The über shitty part about this service? If you cancel forget to renew, Sony will restrict your system from accessing the free content until you do renew.

On the other side of the spectrum, Xbox Live ($60 a year, $25 for 3 months or $10 for a month) gets you online multiplayer (a much more stable service), plus access to ESPN, Hulu plus, Facebook, Twitter, Netflix and last.fm, with the later two possibly being the only things you would use asides form multiplayer, plus Gold-exclusive demos, discounts, offers and the whatnot.

And my multiplayer is stable.

I'll probably get a slew of people saying that I just justified the PS+ price by pointing out Microsoft does the same damned thing, but Microsoft has you pay for features, not functionality. They're not going to make you pay extra for auto-uploading your save files to the cloud when the updates rolls out later this year, Achievements are auto-synced to their service, regardless of your LIVE tier (and have been doing so since the fucking system released 6 years ago), and updates download/install in a fraction of the time Sony's system does.

I guess being forced to download 3.7 for the PS3 to be restricted from all of the new console functionality until I pay for it is Sony's way of bringing new customers to their platform as well as keeping their customers loyal.