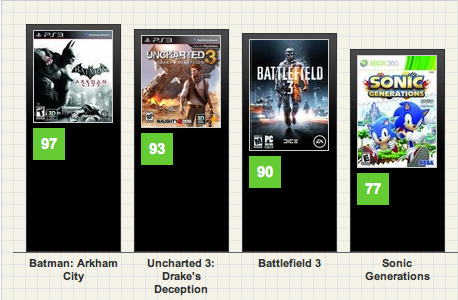 Get this: Batman: Arkham City is overpowering Uncharted 3. How so? Beats the shit the out of me.

Batman stands at a (very) strong 97% with all 33 reviews being positive on the PS3, while the 360 version is at 95% with 67 reviews, all positive again, on Metacritic. Uncharted is at a 93% (55 reviews: 54 positive, 1 mixed). Batman has been rising rapidly over the course of the past two weeks, while Uncharted is actually dropping. I snapped that shot on Metacritic's site, showing Batman and Uncharted's scores, but there's also Battlefield 3 (90%) and Sonic Generations (77%).

In perspective, Batman: Arkham Asylum is at 92 and Uncharted 2 is at a 96. Neither series went through the dreaded Sophomore Slump, which is a damned good thing. Remember how Uncharted 2 was getting perfect scores left and right, earning 24 100% reviews in the first few weeks of it's release? Yea, UC3 has 15.

Of course, this is all meta-data, meaning take with a grain of salt. Batman is already proving to be a fantastic game, while Uncharted 3 will be a fantastic game. If 4 points of margin in the mid-90's percentile keeps you from buying Uncharted 3, turn in your PS3. And your card. I don't care what card it is, just turn it in; you don't deserve it.