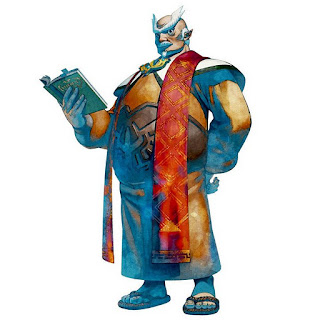 No, you're not reading that wrong. The Facebook page for Skyward Sword just posted this image, stating it was Link's father from the game, with the name of Gaepora.

For those who don't remember or don't know, Gaebora is the name of that godforsaken owl that annoyed the hell out of you in Ocarina of Time, who constantly watched over you, giving you advice in some places, transporting you in others, all the while keeping an eye on you as you grew up.

The connection is immediately recognizable, as the eyebrows just sell it.

It's hard not to come to the conclusion that Gaepora is transformed/reincarnated into the owl Gaebora, albeit with that one little letter difference. Still, the theory is already running rampant in my mind:

Ghirahim turns Zelda's father into an owl - or, Gaepora has powers that allow him to transform into an owl, ala Animorphs - and is locked into that form. He is either a Phoenix in the respect that he can reincarnate himself, or he is an ever-living creature. Since SS is a prequel to OoT, Gaebora himself is reminded of Link from his time in Skyloft when he sees Link emerge from the Lost Woods. Doing his best to rescue the princess, who is named and looks strikingly similar to his own daughter, he helps Link on his journey to meet, assist and rescue Zelda.

Basically, he's got family issues in Ocarina, and helps Link help the princess who reminds him of his daughter.
at 7:31 PM