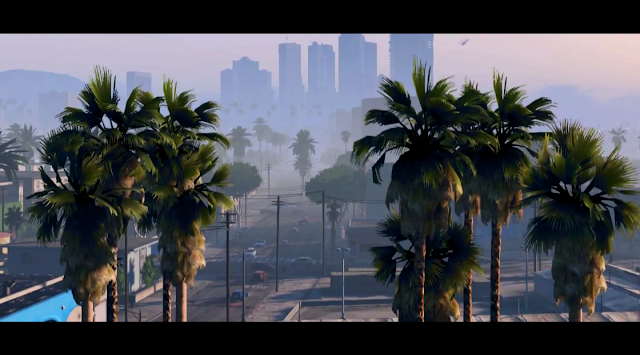 As we all know, the trailer for GTA V hit the web yesterday, and already, people are losing their fucking minds over people you may get to play as. Well, here's my thoughts.

First off, it does sound a lot like Ray Liotta (who played Tommy Vercetti's voice in Vice City), but his people confirmed he didn't do the voice. Now, like I said, it sounds a lot like Ray Liotta, so Rockstart could've gone out of their way to find a voice actor who sounds like Ray to replace him as Vercetti. Hell, the trailer starts off with the narrator questioning himself with this:

"Why did I move here? I guess it was the weather, or the...ahhh, I don't know, that thing, that magic. You see it movies."

He says he moved from somewhere, saying it was the weather. LA's weather patterns aren't as brutal as Miami's, where it's hot fucking sun all goddamned day of the year. LA gets some chilly weather here and there, so it's not as torrential as Miami's rays. It's not far from Miami, but it's "better" in a sense. Also, that "magic"? Well, LA's neighbor is Hollywood...
Next, he says he's retiring from a particular line of work. What work? Well, if you're thinking Vercetti is the lead character, drug peddling is what he was doing. Hell, it's how Vice City started, a coke deal gone bad:

"I wanted to retire, from what I was doing, from that, that line of work, be a good guy for once, a family man. So, I bought a big house, I came here, feet up and thought I'd be a dad like all the other dads. My kids? They'd be like the kids on TV, play ball, sit in the sun..."

A family man, huh? Who's going to let Vercetti procreate? At least he has a good vision of what he wants his kids to do.

Yea, it's fucking Grand Theft Auto. You're driving down the street, some dick driving a trash truck comes barreling through the intersection, cuts you off, jacks your car, punches you in the dick, and you're off trying to find out who did it.
There's also some characters we see. The black guy running in the wife beater? People say it's CJ. The white dude looking at the skyline of San Andreas? They say that's Vercetti. The homeless dude holding up the sign? They say it's Niko, but it's Rockstar's way of poking fun at Niko's voice actor, the guy who bitched and moaned about not getting paid enough for his role (it'd be pretty damned funny if that was the case). Some guy on Reddit pulled this image you see together, which makes the case that these characters are back.
My problem is with Niko. That looks nothing like him. That guy looks like a messed-up white guy down on his luck. Last I checked, Niko was a pissed off immigrant that his BFF/girlfriend died (depending on how you played).

Regardless, I'd like to see Vercetti return. I hated CJ with a passion, but if he returns, maybe his ass has grown up.
at 8:53 PM