Today, my retail store of choice got our demo Vitas in, and when I say "demo unit", I mean it's a full-fledge Vita with a giant sticker on the box that says "Not For Resale". Everything else about this system and packaging is what you are to see when it launches in a little under a month (February 15 for the 1st Edition pre-orders, February 22 for everyone else). Don't worry: other stores should be getting their units very soon; we were supposed to have them a few days ago.

Now, on to the bread and butter!

The system itself is incredibly light, much lighter than you expect. Doing a quick pocket check, I noticed the Vita feels about the same weight as an iPhone 4 (Note: In retrospect, this sound absolutely ignorant, considering the weight of the two: 4.8oz for the iPhone 4, 9.2oz for the Vita (9.8oz for the 3G model), nearly double the weight. I do have to add that, despite the Vita being twice as heavy, it feels incredibly light, as the components inside are more than likely evenly distributed, which lead to it's supposed weightlessness), and suprisingly enough, it didn't hinder movement and didn't feel all too obtrusive; just for comparisons sake, I quickly swapped the Vita for my iPhone in my pocket, and the iPhone felt more obtrusive (I do have the Apple Bumper on mine, so that may give credence to that). The build of the system is extremely sexy; Sony does know how to make hardware, that's for damned sure. After holding the Vita for a while to do the initial setup on both units, I held my iPhone to take a few pictures, and holy shit, I actually had a hard time holding the iPhone, probably because it's so damned thin (or the Vita is incredibly fat).

The button sizes on the Vita are actually smaller than those on the DualShock 3 and the PSP, but around the same size as the 3DS face buttons; don't let the button sizes fool you in pictures, but the Vita isn't as large as you think it is if you haven't held one yet. The front camera placement is very awkward, as you can see it nestled in the NW spot between the

buttons. I opened the Photo app to test it out, and looking dead-on, straight-ahead at the Vita, my self-portrait photo ended up being cockeyed, which is a huge let-down. The buttons themselves (

, Start, Select and the PS Button) felt very snappy, much like the 3DS, rather than the soft touch like the PSP or DualShock 3. The L/R shoulder buttons and the D-Pad are a little softer to the touch. The analog nubs are a huge upgrade from the PSP's nubs, but their diameter could stand to be a bit wider.

With that said, I have to say this: the Vita did not feel overbearing in it's size. It felt very nice in my hands, but those holds on the backside don't appear to be doing their jobs; my fingers didn't fit naturally into them at all. The large 5" OLED screen is fantastic. The touch responsiveness is quite remarkable, considering the best touch screen tech I've laid my hands on is anything iOS, so having something that is responsive and the gestures do what you want them to do is something well welcomed.

Unfortunately, I wasn't able to test any internet functionality; if I wanted to play Little Deviants, the game Sony provided with the test units, I had to connect to the PSN (also, the PS Store is still down in the US for the Vita; it gave me a "Not available in your location" error, as one would expect). I didn't want to enter my information, considering Sony doesn't easily allow you to remove your account info. However, in our documents, Sony suggested we create our own PSN account for our specific store. Trying to do so, Sony still wanted personal info - birthdate, address, first and last name, email, etc. - so I had to call Sony, which the team that handles retail queries was in a meeting, possibly about helping retail associates out with Vita related issues, such as this.

While going through the menus themselves, I quickly remembered that you can only navigate menus via touch control. That's right: menu navigation is restricted to touch control only. D-Pad, L/R buttons, the face buttons...it all wouldn't work on the main menu. The only thing that did work was the PS Button, and that was for returning to the main menu of floating icons. These icons work just like what you'd see on Android or iOS: tap the icon and it launches. However, Sony has implemented a "fail-safe", where it brings you to a secondary menu that asks you to launch said program, rather than bringing you straight into it. I actually kind of liked that, but some may find it obtrusive. 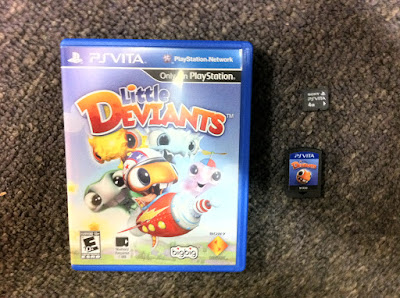 Along with the Vita, Sony sent us a copy of Little Deviants as explained above and a 4 GB Vita memory card (well, two of each, considering we got two Vitas). Like I said, I wasn't able to play it because of the PSN issue. However, the size of the case, game cartridge and the memory card blew my goddamned mind.

What you see to the left is the game case for Little Deviants, the cartridge itself (which is no bigger than an SD card) and the Vita memory card/stick/kajigger. It's remarkable how small the memory card is, which it comes to bear in mind: buy a fucking carrying case for all this shit, because you will lose something within a month. I was afraid of taking the memory card out of the system, because I didn't want to lose it. It would've been nice for the memory card to be bigger just for this reason, but leave it to Sony for creating a whole new proprietary memory format for just one device. 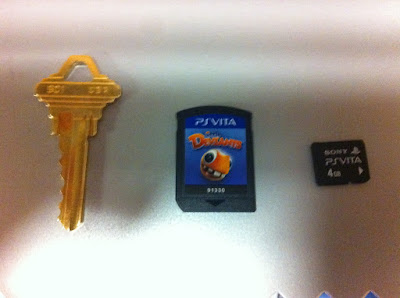 Now this shows exactly how small these things are. First, you see my house key, then Little Deviants, then finally that 4 GB Vita memory card. Look how small that fucker is. It's tiny! I still don't understand why it had to be this small, but if you plan on getting small memory cards, you may as well forget it and go bigger, because you will end up wanting more memory space, and you won't transfer your stuff over. Accessing the memory card is very difficulty, the charge cable we had connected to it (the battery was practically dead when it arrived) got in the way, so I will write it off on that. Sure, you can use your PS3 to store data (which, again, I couldn't do in-store because of the demo restrictions in place on the PS3s), but that's only for those who have a PS3. Go big or go home with the memory cards, essentially. 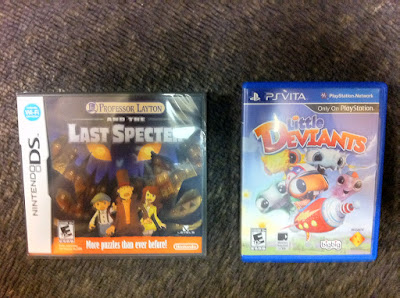 Here, you see the Vita game case compared to a DS case, in this case, Professor Layton and the Last Specter. It's just a little bit taller and about two-thirds the length. The game case's width is about the same as the 3DS. There was no instruction manual with the case, and the game cartridge locks into it similarly to how the UMDs locked into their respective cases. But what I did check for, and Sony did come through with, is the reversible slip-covers: 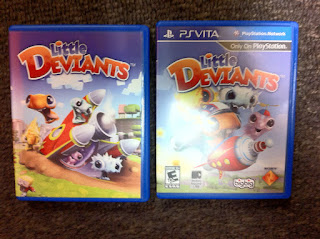 You see the standard packaging for Little Deviants on the right, but the reverse of it on the left. A pretty nifty addition, and something you come to expect from Sony.

The GUI of the Vita does take some getting used to, as Sony has scrapped the XMB in favor of LiveArea, the official name of the Vita's menu system/OS. I don't like the bubbles, but navigating is the same from Android and iOS, which is a godsend; don't fix what ain't broken. Swipe to navigate to different pages of icons, hold down on an icon to enter Edit mode, drag to move them, etc., etc. To unlock the device or close out active applications, you have to "peel" back the corner as if you're changing pages in a book. Everything feels natural, but just the look of the LiveArea OS doesn't seem to fit a Sony product like this, especially how well the XMB works on the PS3, PSP and other Sony products; LiveArea seems like it would work better on touch-enabled cameras. I didn't run into an area where I could use the rear touch panel, but I'll post an addendum when/if that happens.

So far, my time with the Vita has been great. Originally, I had absolutely no interest in the Vita, as portable gaming has all but been lost on me as of late. Now, actually holding one, playing with it, testing out features and the like, my interest is rising. After letting myself cool down from handling it, I can say now that I would like to own a Vita. However, the launch lineup isn't solid enough for me (yes, I'm aware of Uncharted and Super Stardust, but that's not enough). I need some really good, quality titles to get my interest to rise enough to plop down another $250 on a gaming system; I still only own Ocarina of Time on my 3DS. That, and/or a price drop.

Until then, the Vita is going to stay on the shelf, far out of reach of my wallet.

Being this a preview, I can't wholesomely bring myself to give it a letter grade, but considering what I held and played with is the retail unit, I would like to give it a preliminary grade: