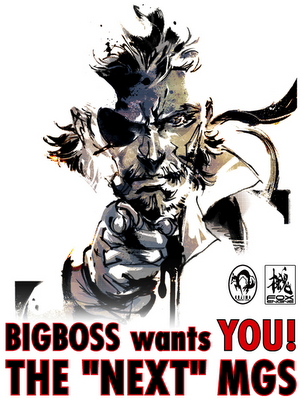 A new Metal Gear Solid has been "announced", via a recruitment page run by Konami. There are only two images revealed (the first above, the second below), but the second image is what set off my thought juices.


After the break, you'll find a comment I posted on Kotaku (as well as the second image), which basically takes the image of the dog and runs with it, giving me the idea that, basically, this new game takes place in the 1980s in Southern Africa. It's really narrowing it down, but I believe it to be accurate:

Alright, so in regards to the dog, I had to get my girlfriend in on this (she's a veterinary technician, so she knows her stuff).
The dog in the artwork - as well as the dog in those older images that Kojima released, showing off the power of the FOX Engine - is a Rhodesian Ridgeback, which was "developed" in Southern Africa, specifically Zimbabwe, starting in 1922. I say "developed", as some guy got a wild hair up his ass and decided to breed a new kind of dog, with its roots tied to the Dalmatian.
Before everyone's Metal Gear senses go off (as did mine), I started thinking of Zanzibar Land (the 'Z' did it in for me). Zanzibar Land itself, according to the game's themselves, is in Central Asia. Zanzibar itself (in real life) is a series of islands located off of the east coast of Africa in the Indian Ocean, which is technically part of Tanzania in South Africa.
I can't think of a way to tie these in to the franchise, but those images with the dog and the African child are approximate - the Ridgebacks were used to aid those in hunting lions (using them as a distraction, more specifically) in Africa - but the use of an aid to Big Boss? And this Big Boss looks to be a younger Big Boss, more like during the 60s and 70s (Snake Eater through Peace Walker). Given the age, I highly doubt we're looking at Metal Gear/Metal Gear 2 remakes, as the age difference here is profound (Boss was fairly old near the turn of the century in the franchise, closing in on his 70s).
The patch on his arm could read "Sleeping Dogs" as some of the others have suggested, but I believe to read "Sneaking Dogs". (Ed Note: After posting this, another commenter - Jomes - posted, revealing Kojima's passion for David Bowie, and that the arm band reads "Diamond Dogs", as the shape around the dog's head is a diamond.)
I'm incredibly intrigued, but it seems as they're still going to stick around with Big Boss, rather than Solid Snake. Considering we've yet to see Boss' full transformation from "decorated war hero" to "complete, bat-shit insane old guy", we've still got plot holes to fill. Outer Haven wasn't technically fully established until the late 1980s, there's still about 10-15 years to fill in, plus the next 5 or so years between Outer Haven's establishment and the first Metal Gear taking place.
So: Rhodesian Ridgeback is the dog, native to Southern Africa, which could link the new game to that region, which could be where Boss moved MSF (possibly near Zanzibar island), then ended up moving up into Central Asia, keeping the name "Zanzibar" with him, as he coins "Zanzibar Land". With the various Konami-licensed stuff out there, revealing things that have yet to be confirmed as canon or non-canon, the rumor is that Zanzibar Land is nothing more than Tselinoyarsk renamed. That would make sense, as if my theory is true - Boss moving MSF from Costa Rica to Africa's East Coast (possibly on Zanzibar island), then moving MSF to Central Asia where Tselinoyarsk is believed to be (this is where the entirety of Snake Eater took place; by moving it to Tselinoyarsk, this could reaffirm Boss' reluctance to let go of his memory of The Boss), then renaming it to Zanzibar Land as homage to it's prior location - then we can all thank that beautiful Rhodesian Ridgeback dog for leading credence to it.
Thank you, Metal Gear Wiki and copy/paste.
at 12:12 AM