Here's the deal: a character who worked for BioWare (now over at Riot Games), who goes by the name of Christina Norman, has given the middle-finger (Kotaku's words, shared by me) to gamers who believe that Day-1 DLC - or, rather, the "Industry's Mushroom Print" - is a complete sham/utter disgrace to the game it's for. Pulled from Kotaku, she spoke at GDC recently:


"There's no point in releasing DLC a year after your game has come out when most people have already sold your game back to GameStop three times. That means getting it out early; that means even day-one DLC. That is a terrible thing to some players. Players rant—they know nothing about this DLC that's coming out except its name. But then it's 'oh this game must be incomplete, the game must be ruined.' Game developers are not evil. (Some are evil.) But most are not evil. We just want to release awesome stuff. Players please, give us a chance. Judge our games based on what they are. Judge the DLC based on what it is. Stop thinking you're a producer and telling us when and where we should be building our content."

There's a problem with that, something that commenter Eight-Bit Generation put in such elegant words that I'm reposting it here, with permission (the entire thread can be viewed here):

Dunno Why You're Complaining, I Enjoyed I Am Alive 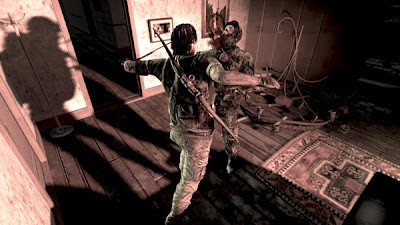 I've seen this game get shit on for the past few days from reviews out there, but after just finishing it in the past few minutes, I have to say that I am thoroughly pleased with the game. After almost being condemned to vaporware status, Ubisoft pulls a Gearbox, says "fuck it", slaps a coat of veneer on it and ships it.

There were a few problems - control issues, navigation, climbing mechanics - but it all worked out. I pulled a 95% rating (I missed two survivors, didn't steal or resort to cannibalism) which I'm fairly proud of (where are those last two survivors?), but the issues weren't that bad. The map itself, well, you only explore just a fraction - I'd say 2/3's of the entire map gets visited - but you'll get to find new ways to explore it in few instances due to earthquakes (these are story-based, I'm assuming, as I only experienced 2).

I'd love to know what the fuck happened at the end (SPOILER, highlight to read: the video sequences you see as cutscenes are actually watched posthumously from Julie's perspective, who it's not necessarily revealed it's Julie until the camera pans away from her at the end to reveal Adam's backpack, machete and bow: END SPOILER), and there's a few more questions to be answered, which I'm expecting sequels.

Much, much, much better sequels.

Review grade, you say? Sure:

Email ThisBlogThis!Share to TwitterShare to FacebookShare to Pinterest
Labels: i am alive, mini review

Is October the New November for Game Releases?

First there was Assassin's Creed III, now today, BioShock: Infinite's release date is just two weeks prior on October 16. So far, there haven't been many holiday release date reveals (asides from Resident Evil 6 on November 20), but I'm down for it.

Let's spread the love between September (most likely Halo's release date) and November; my income can't support 19,000 releases in 3 week's time. Two games I'm looking forwards to drop in the same month, well ahead of the holiday schedule. I say keep at it, publishers!
at 10:53 AM