The idea propped up during a recent Kotaku article about ESRB ratings in regards to two fairly recent games: Batman: Arkham City and Halo Anniversary, rated Teen and Mature, respectively.

Kotaku's point - or, more of, Stephen Totilo, who wrote the article - essentially says that the ratings should be flipped: while there is killing in Halo CEA (it's not glorified, but it is tamer than what we've been exposed to in the 10 years since the game's initial release), Batman's style of flourish fist-fighting is portrayed in more extensively brutal fight sequences, what with bone-crushing attacks, and intense one-on-one combat between The Bats and the various goons.

Others were quick to point out a simple fact: you kill in Halo, you only subdue in Batman. Makes sense, right?

Gander at other franchises in the past 20 years of gaming, and watch each new entry gain a higher level of ratings on ESRB. A prime example would be The Legend of Zelda. When the ESRB was established, the first game in the franchise to be rated by the firm was Ocarina of Time, which garnished an E rating. Fast-forward a bit to Twilight Princess' release, which was the first game in the series to earn a T rating, and the only one to do so since. Beyond that game, only three other games in the franchise have earned an E 10+ rating: Spirit Tracks, Ocarina of Time 3D, and Skyward Sword.

That's right, the original Ocarina of Time was rated E for everyone, but the remake - which adds some technical glitz - was given an E 10+ rating. Each Zelda game since the DS's Zelda-swan-song has been given a higher grade than what is traditional to the series, yet the physicality of Link's combat has hardly changed; even with Ganondorf taking the Master Sword to the face at the end of Wind Waker, that game was only given an E rating.

When questioned about Halo CEA's ESRB rating and why it hadn't changed, they had this to say:

"When a game is simply a "re-issue," meaning that it's just a re-release of the exact same game, then the originally-assigned rating continues to apply. In this case, however, the graphics were updated, which made the depictions more realistic. So it was put through the rating process and received an M rating."

The ESRB went further to say:

"...these two games illustrate why it can at times be difficult to determine where to draw the lines. The M rating for Halo is undoubtedly at the lower end of the Mature spectrum and the T that Batman: Arkham City received is at the upper end of Teen. It's always at the border between two categories where there is the greatest divergence of opinion, and that's to be expected."

Correct. These games hover at the border between being upgraded to Mature, or downgraded to Teen. It is with that respect that offer the ESRB this: a new rating that will help fix that border-straddling issue. I give you, the T 15+ rating. 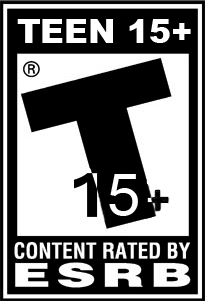 I must point out that, yes, I did create this logo. No, I have nothing to do with the ESRB; this image was created for the sole purpose of this blog post, specifically as a visual aid. Do not get any wild idea.

I leave you with my comment from Kotaku about this very grade rating.

While PEGI and ESRB are fairly even leveled, PEGI still does have a difference in their ages: their equivalent of a Teen rating is 12, while their "Mature" rating is 16; they still have 18+ ratings, and I've seen those used more often then ESRB's AO rating. Now, take a gander back to CERO. They focus more of the various levels of "mature" content between 4 different levels across 6 years of age. While CERO has their "middle ground" rating, the rating's ages for PEGI are more appropriate leveled.

As far as the ESRB goes, there are two, 4 year gaps there: one between E and E 10+, and another between T and M. While content for children between the ages of 6 and 10 are fairly universal ("zomg! Spongebob hit Patrick with a jellyfish!"), there can be a larger gap of "appropriate" content between a 13 year old and a 17 year old. My younger brother just turned 13 back in February, however, he's far from the content you'll be able to see at an R rated movie or aforementioned content on HBO or other PPV services, all of which you "have to be" 17 in order to view. My parents may let it slide when he's older (say 15 or 16, as they did with me), but they pause the TV until he leaves the room.

There is a middle ground between T and M rated games, where some games that include the word "fuck" just a little too much can go from Teen to Mature within 2 seconds. If there was a T 15+ rating, for ESRB (which [wouldn't] be too far from their current lineup, and would fit nicely as a "big brother" to the E 10+ rating), I feel there would be far less scrutiny about ratings, and some games would avoid the debacle of having to be re-rated (Oblivion).

Or, you know, scrap ESRB, start over, and parents should be more educated with what they buy their kids. But that's asking too much."
at 11:33 PM