[REVIEW] Write all the (mini) reviews!! 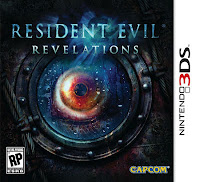 What's Great: The 3DS gets a well-deserved console-like experience in the Resident Evil franchise. The visuals are great, controls are done surprisingly well (no, I did not use the Circle Pad Pro; I don't shop at GameStop), and inventory management gives you the impression of actual survival.

What's (Not So) Great: The same. Goddamned enemies. Over. And Over. And Over. Again. It may be restrictions of the 3DS game cart or of the system itself, but there should be more variety. I'm quite aware that other zombie game, or games that feature undead-ish enemies, are the same, but they have visually different appearances, and look different. I don't give a shit if they all attack the same, give me some variety. Something else lacking variety? The scanner. Each fill-up gives you a green herb. I understand it's similar to Super Mario and coins, but I want a scanner more like Metroid Prime and less like a useless piece of shit.

Chris and Jill's sections play dramatically different. Jill is narrow corridors on a ship that looks like the inside was ripped straight from a mansion, and Chris is more open-ended areas with a more action-oriented focus. It doesn't help, either, that you start as Jill looking for Chris, and then the next chapter, you start playing as Chris. Spoiler! Looks like he's alright...

Bottom Line: The game definitely has it's shortcomings, but it's solid overall. It's not fantastic, but it's terrible, either. If there is a sequel, I expect it to be leaps and bounds better. I mean, it's hard to fuck up "average", but then again, this is Capcom we're talking about...

What's Great: A fantasical, bloody, twisted version of Portal meets Geist. Take the portal gun, cram it inside of a little alien dude, and bring in Geist's ability of being able to posses objects, with The Island's overall theme of "escaping underground/water and you've got this. Puzzles get progressively harder and harder to solve, with the tutorial and the first 30-40 minutes being the only forgiving aspects. The satisfaction of solving this puzzles further in is rewarding, much like Portal.

What's (Not So) Great: Difficulty curve. Once you get about 4-5 levels down, shit gets serious. Seriously fucking hard. I would expect some buffer in there to help soften the blow, but they just say "fuck it" and throw you in. There are some upgrades that are essentially pointless, too.

Bottom Line: Absolutely fun puzzle game. Many gave it shit, but it's a very enjoyable game. Get past the shortcomings, and you'll have a blast.

What's Great: A not-so-bad reboot to the franchise that tries to do things different. There's enough "future play" in here to interest just about anyone if they took the time to put Call of Duty down and try something different.

What's (Not So) Great: The game tries to be like Deus Ex so bad, it's hysterical. Hacking has no merit behind, and is borderline moot; hold LB to hack anything within scanning distance to do anything. Enemies, especially those higher on the food chain, are disappointingly shallow, despite attempts to flank. Oh, and what happened to Rosaio Dawson?

Bottom Line: Billed as a Deus Ex clone, you'd have thought that this would be a fantastic game, especially after Human Revolution came out just a few months before it. Sadly, that's exactly why I feel this game failed. Coming from playing DXHR, this game feels shallow. It's a bold attempt from EA to reboot the franchise into a genre that has too many players in it already, and a fantastic way to alienate existing fans. If you haven't played DXHR already, play this first, then go into DXHR. If you've already played it, well, just avoid this game, or be forewarned that you'll be incredibly disappointed.

What's Great: An absolutely fantastic console experience on a handheld. Golden Abyss shows that the Vita is an incredibly powerful system, and has great potential. The series' acclaimed voice actors return in their respective roles, giving the performances they are all known for.

What's (Not So) Great: Gimmicky controls, sub-par dialogue...it just doesn't seem like the experience we've come to know from the series. Yes, I know Bend created the game and Naughty Dog was looking over their shoulder like a concerned parent. Why do I have to use the machete to cut down a sheet when I just brush it out of the way? Why do I have to use the touch screen to navigate the menus? Why can't I have control over how much touch-screen interactions I have? Secondly, why is there so much shit to collect. Yes, I collected it. No, I'm not sure why.

Bottom Line: It's probably the best game on the Vita at launch, but will quickly be forgotten. It's not the memorable experience that the other entries share, but it's definitely worth exploring.

Editor's Note: I won't be going too far into this hardware review, as I already quasi reviewed it some time ago in a (p)review of the system.

What's Great: The build of this thing is remarkable. Before I held one, I was a detractor. A big detractor. I wanted nothing to do with the system. Once this thing weaseled it's way into my hands, I was this close to buying one. It took me a few months, but I broke down and bought it (along with the above game).

What's (Not So) Great: Forced touch screen navigation. iDevices have touch-screen navigation because of it's design. The Vita is designed to be a bridge between tablets and game devices, what with all those pushable buttons on the face of it. So explain to me why the fuck can't I navigate using the D-Pad? The library right now is fairly lack-luster, being restricted to only one PSN account is damned stupid, and not being able to use certain applications while playing a game (web browser, for one) is completely backwards. Fortunately, this is all something that can be fixed with firmware updates and time.

Bottom Line: The device is fantastic, but the software isn't there quite yet. As of this review, Uncharted and Gravity Rush are probably the only games worth playing, or rather, worth buying the system for. If you really want to wait until games are there, you've got until October when Assassin's Creed: Liberation hits.